After about one month break in Hainani finally was on the move again. From Haikou I got on a ferry heading for Beihai. It was quite a comfortable 11 hours boat trip and I had a good night’s sleep before waking up to some Chinese music blasting in the speakers. I stepped off the ferry to a dark cold morning but felt exited to do some riding again. 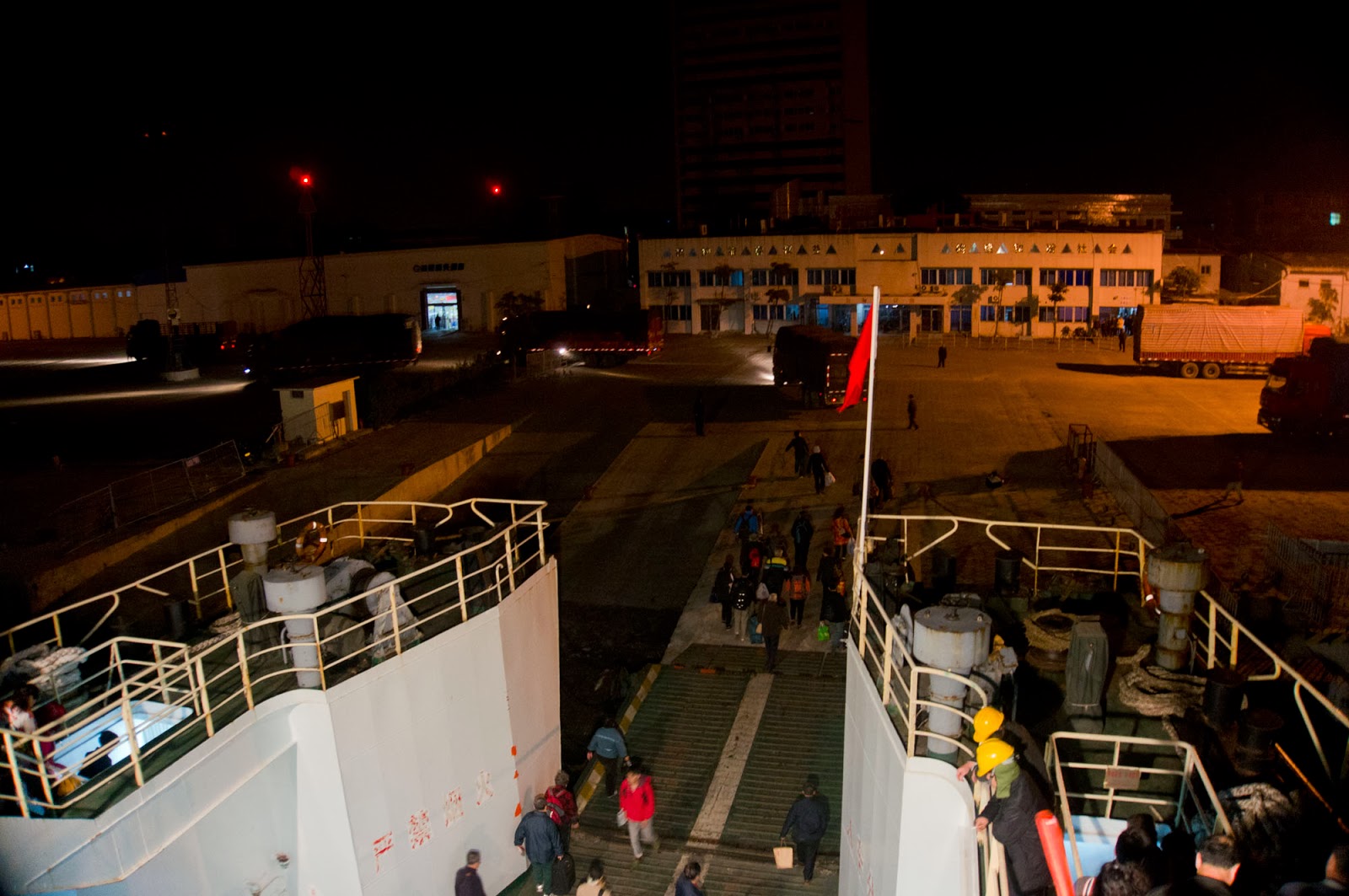 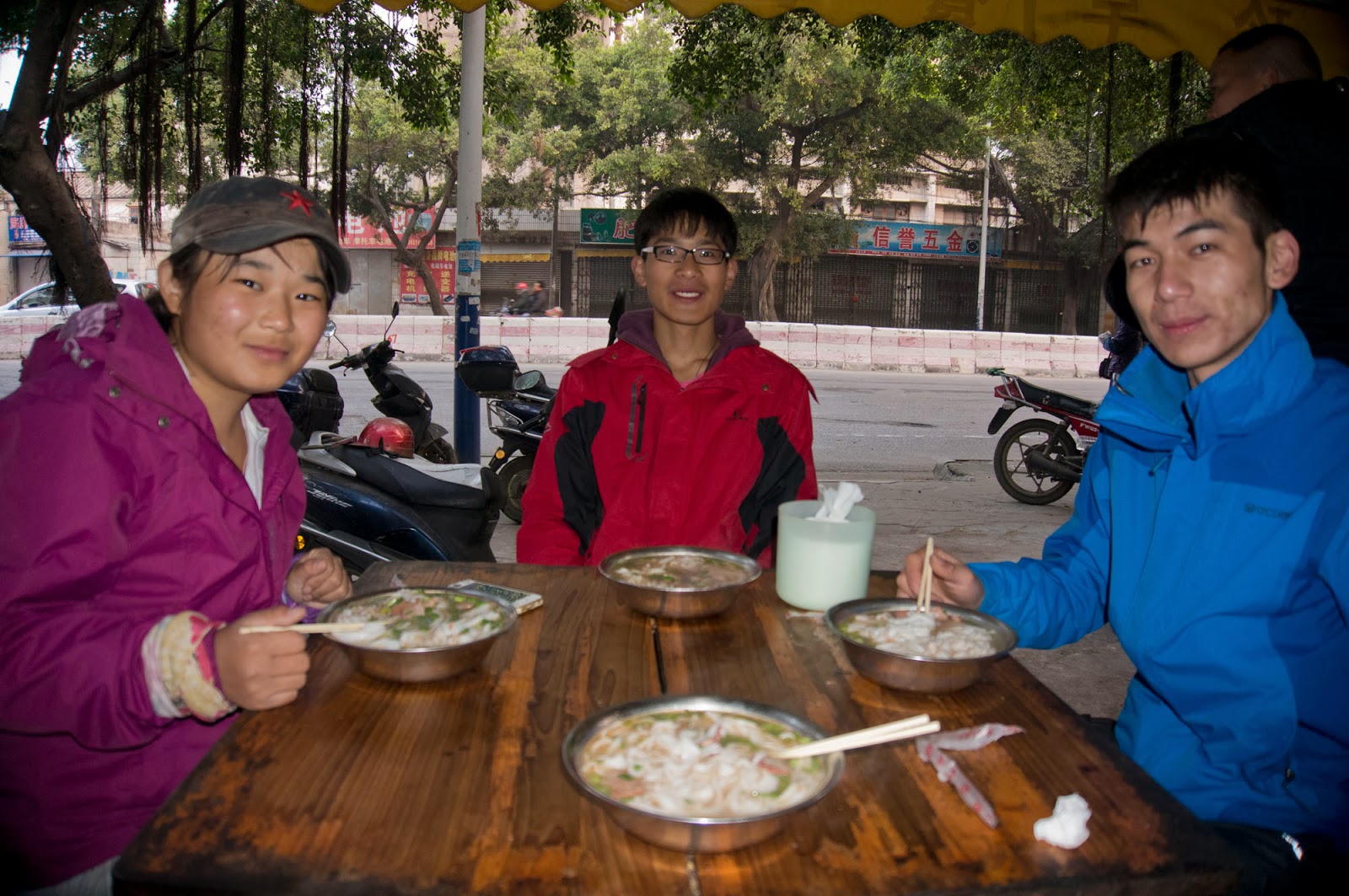 Right after getting off the ferry I met two other cyclists, one of them with his bike upside down trying to fix something. We started talking, well as good as we could with their limited English. But the girl Jia knew a little and plus the help of an translate app were we able to communicate. It turned out that we were going the same way and decided join together. The two of them had met on Hainan a couple of days earlier. Jia had rode her bike from Inner Mongolia starting in July, and I got more and more impressed by this little 21 year old girl with a brave heart and a strong will. Wang was also young at 20 and had been riding for a couple of weeks before joining up with Jia. After breakfast during a still cold morning we looked up a bike shop to fix Wang’s bike because his back wheel was in really bad shape. It took some time and we didn’t get going until after 11. We were all heading for Qinzhou that was about 100 km away, so there was no time to lose after a late start. We arrived in Qinzhou just before sunset with tired legs, at least I had because I hadn’t done any cycling in a while. 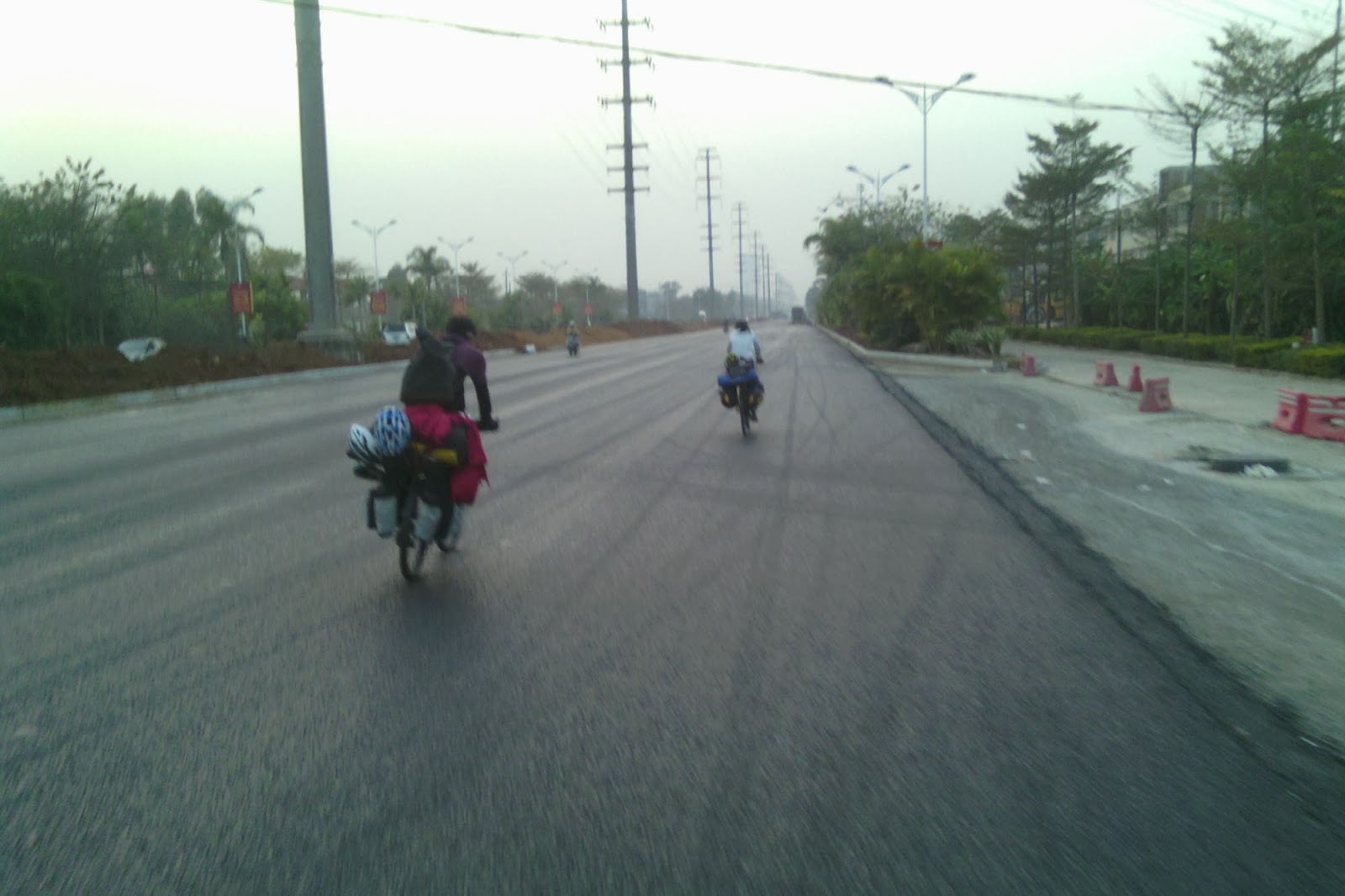 We met up with my couchsurfing host Hung who was really nice and had a room for Jia and Wang too. We had a really nice evening together and had some great food, probably the best oysters so far in china. And after that we went for a walk around the old part of town. The next day was New Year’s Eve and we all stayed in Qinzhou. In the evening we went to Hung’s friends pottery workshop where we could see some really nice handiwork and also try to make something of our own, which is not easy.. 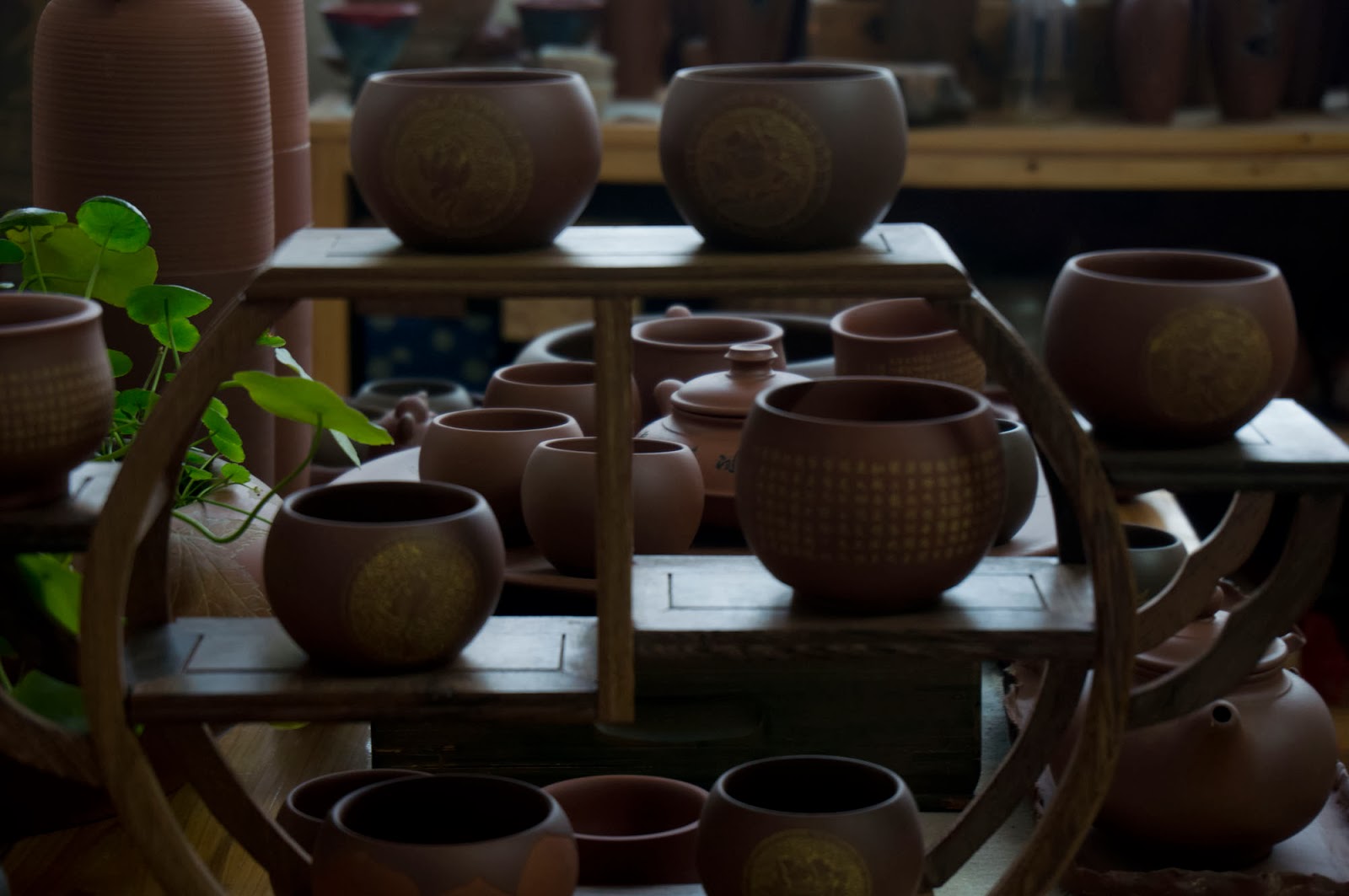 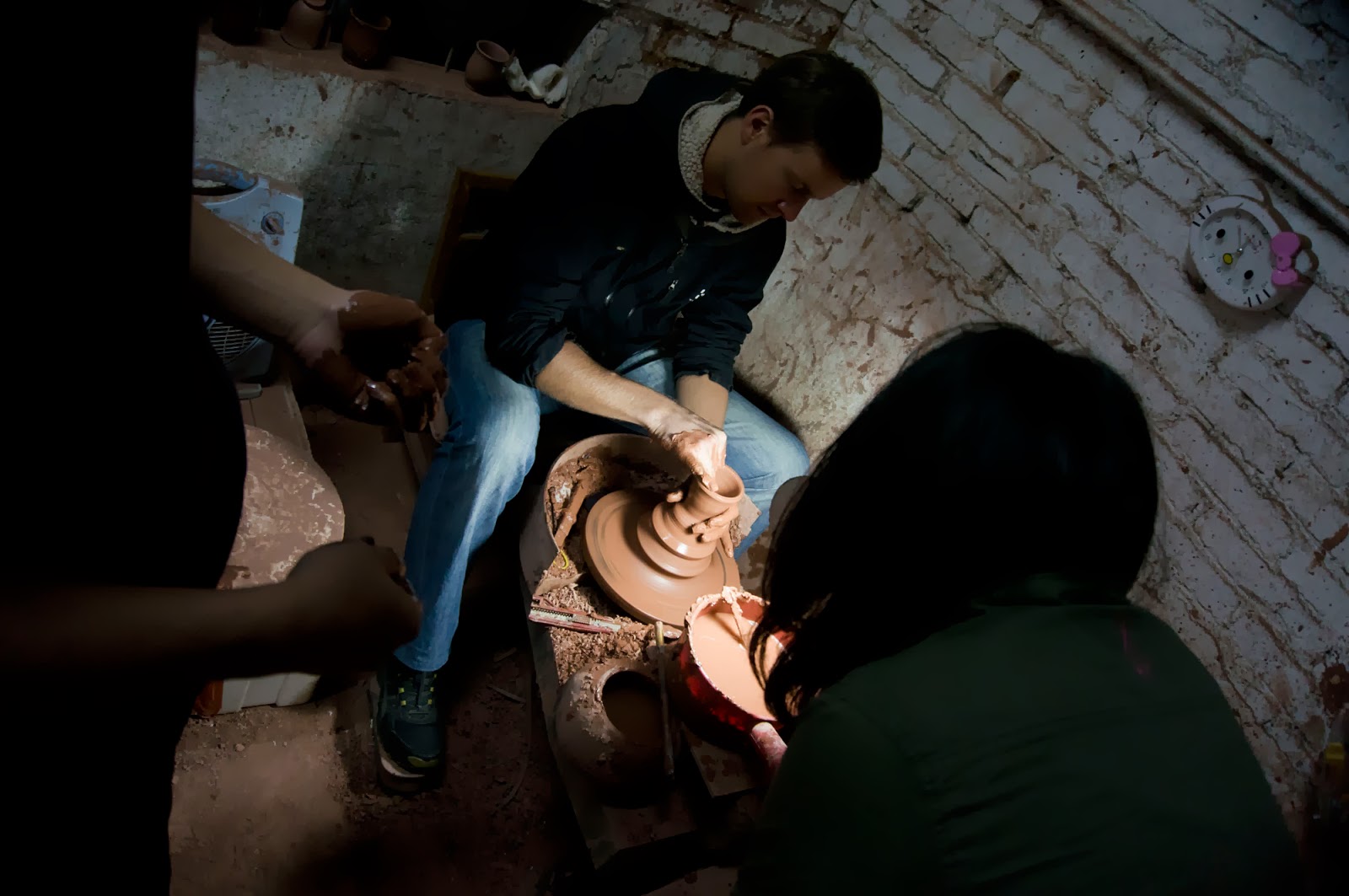 We met up with some other friends of Hung that night and had a really good time celebrating the New Year. And I have to say that I am really excited to see what 2014 has to bring.. 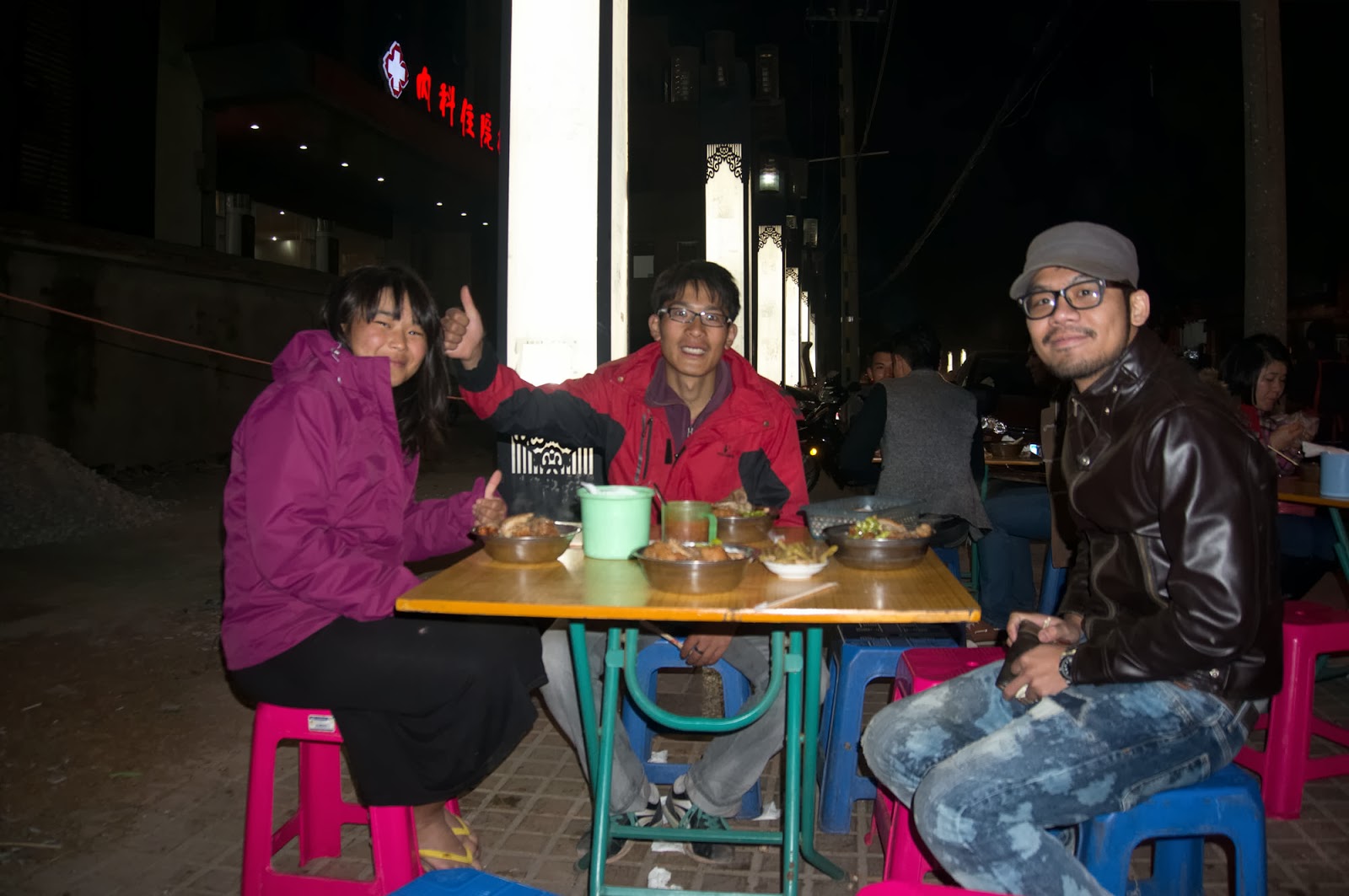 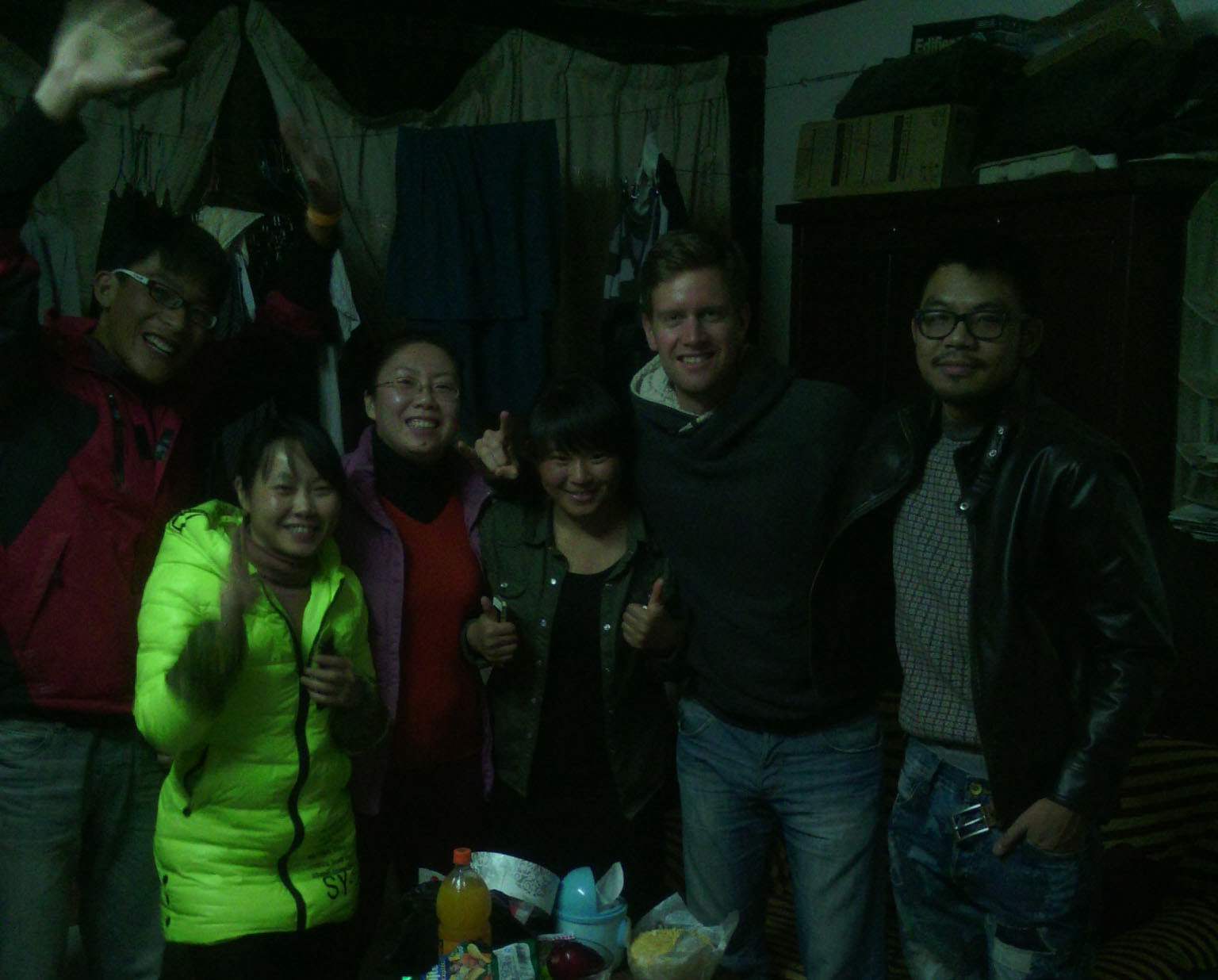 On New Year’s day the three of us was back on the road heading for the border town of Dongxing. For the first part of the ride we rode along a beautiful small road along the sea that Hung had suggested. 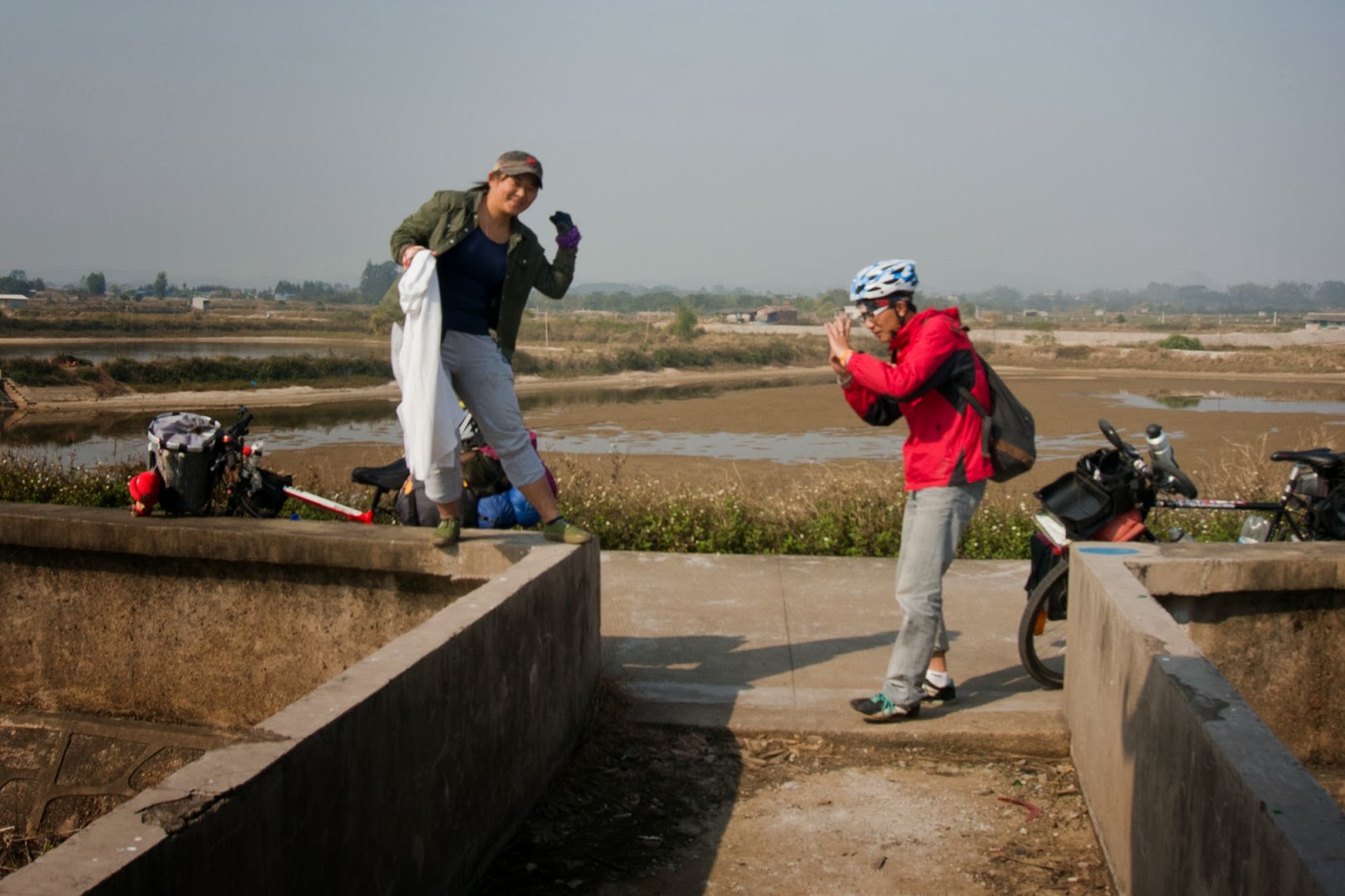 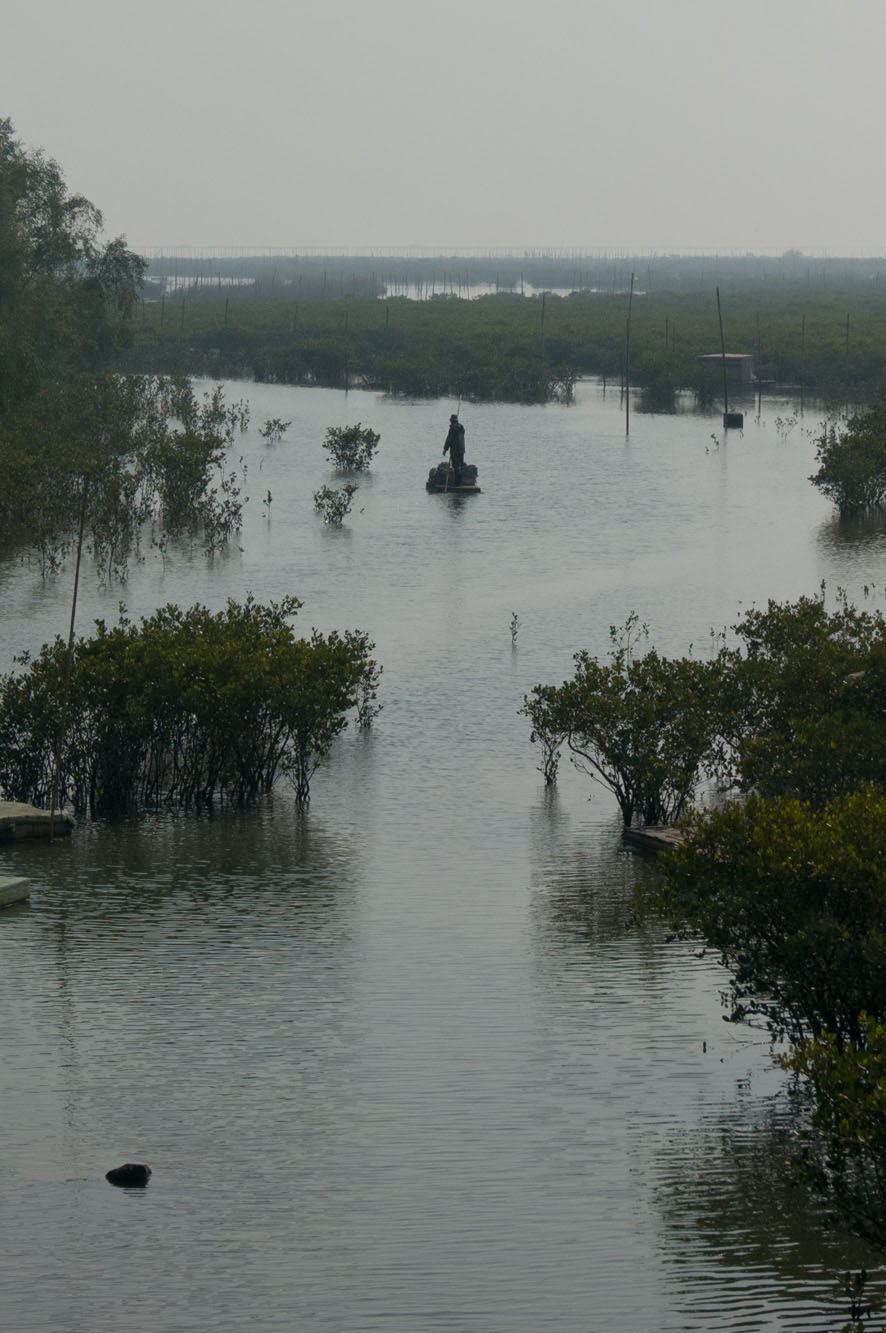 But after a relaxing start with great views we got on a really bad, bumpy road. Can’t be lucky all the time. We reached Dongxing in the evening and found our self a small hotel with a room for the three of us. We were hoping to be able to ride together for longer, and at first it looked like Jia would get her visa the following evening and be able to catch up with me. But Wang’s plans changed since he also wanted to go through Vietnam. But with no passport he had to get back to his hometown and back the next week. So we said our goodbye at the border and I went along alone super exited to cross the first border in four months (not counting Hong Kong). The crossing was really smooth with a special line for non-Chinese where I was the only one at that time. And with no visa needed I just got my stamp and 15 days stay.
The first couple of hours riding was just amazing. I had almost forgotten the great feeling of riding into a new country and just take it all in. And after being in China for four months were most people just stare at you, here in Vietnam people are smiling and waving as I go by. After a stop in a small town I reached Ha Long the next day. It’s quite touristic there and that was a big change for me because I hadn’t met many tourists in a while. Almost felt a like “Asian” when I saw some European tourist at first in the town. I smiled and said hi, but they weren’t as excited as me =) 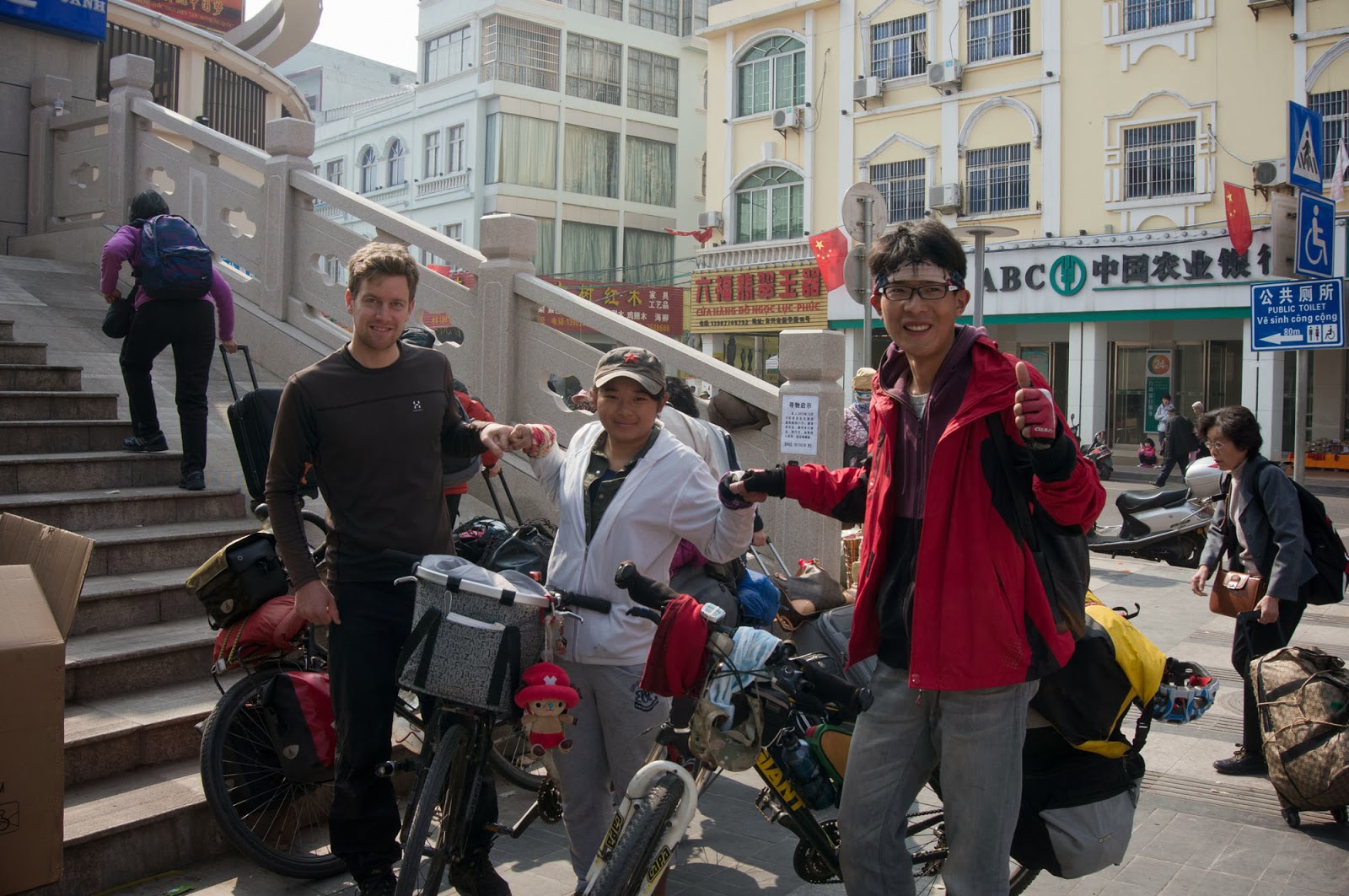 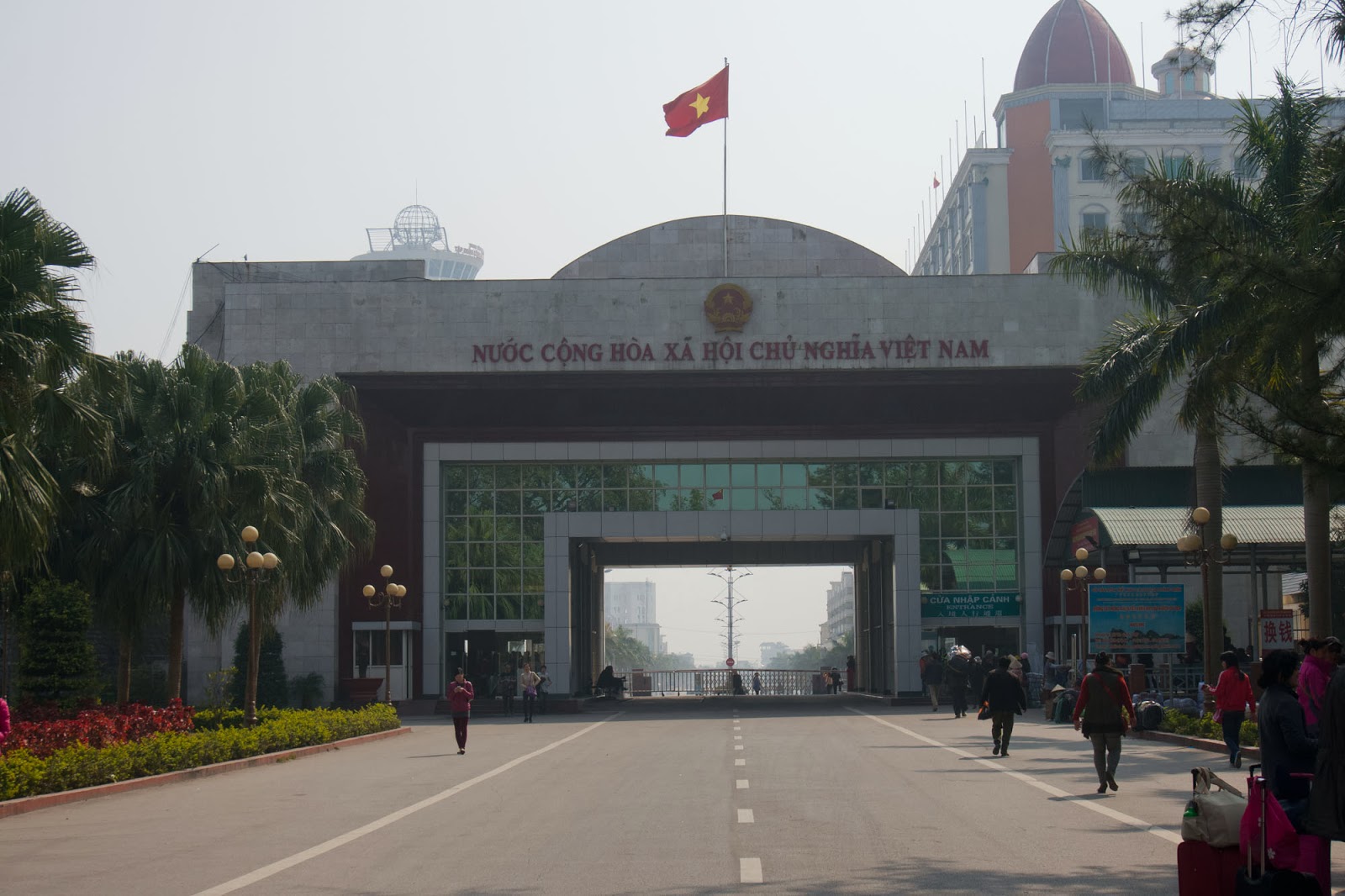 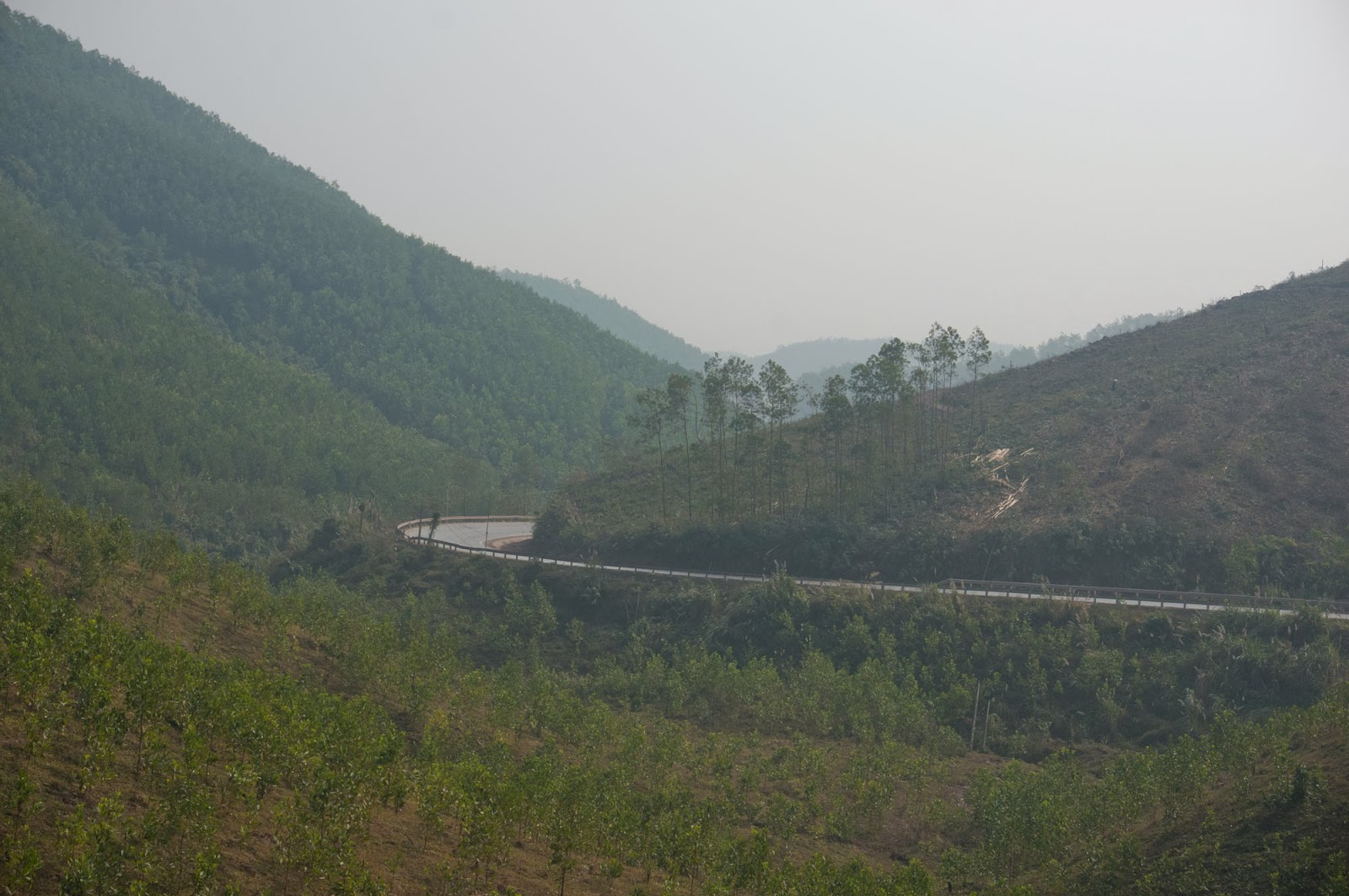 I met up with Linh from Couchsurfing and she found me a nice place to stay, had a really nice dinner with her family and went out to meet some friends at a café. And one big difference from China and Vietnam is the coffee. Here they got really good coffee and small coffee shops everywhere.
The next day we woke up early and headed down to the port for a boat trip around the famous Ha Long Bay. And we had a really nice day. On the same boat we met some other travelers, three people from Indonesia and a hitchhiker from France. 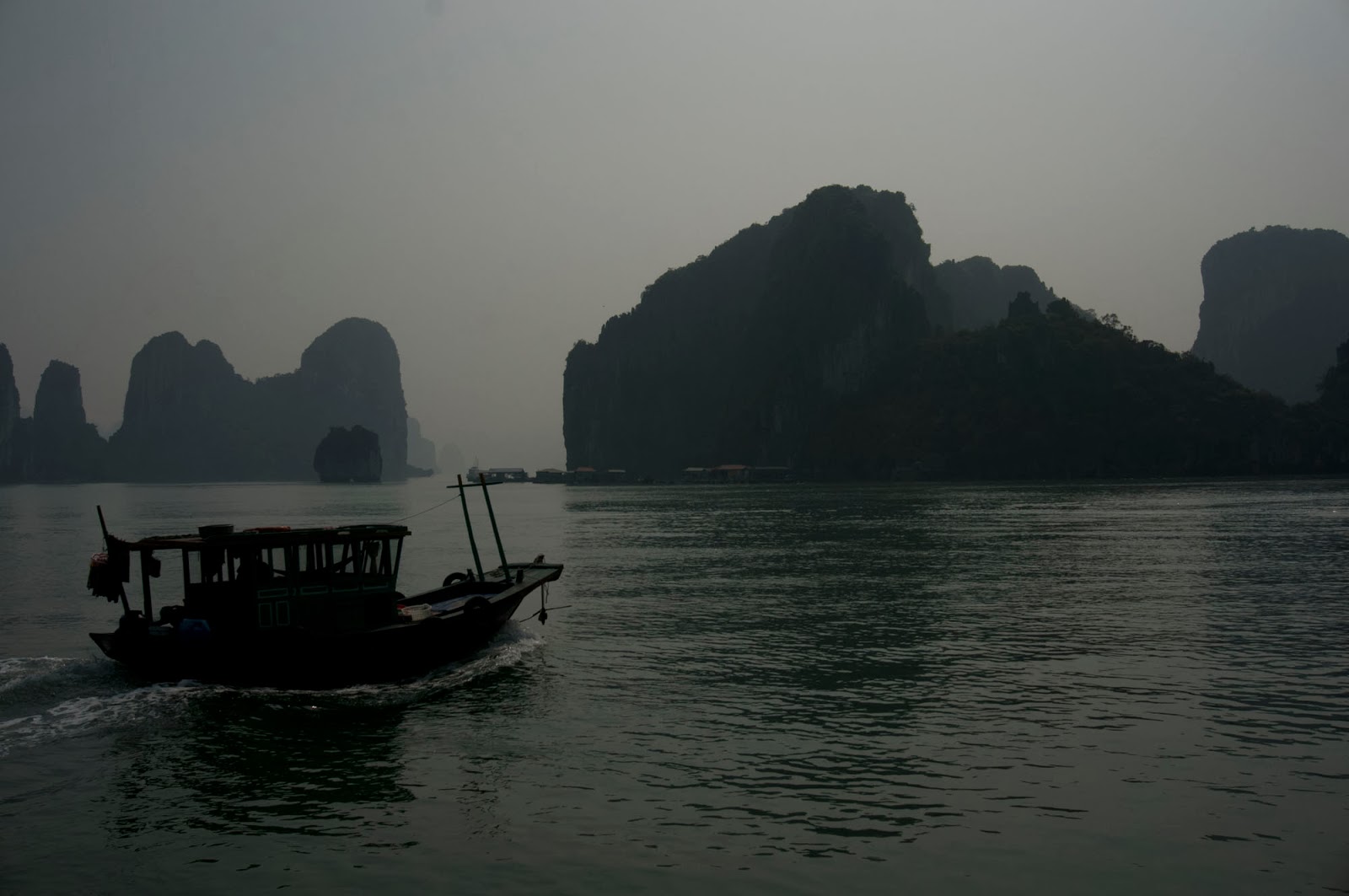 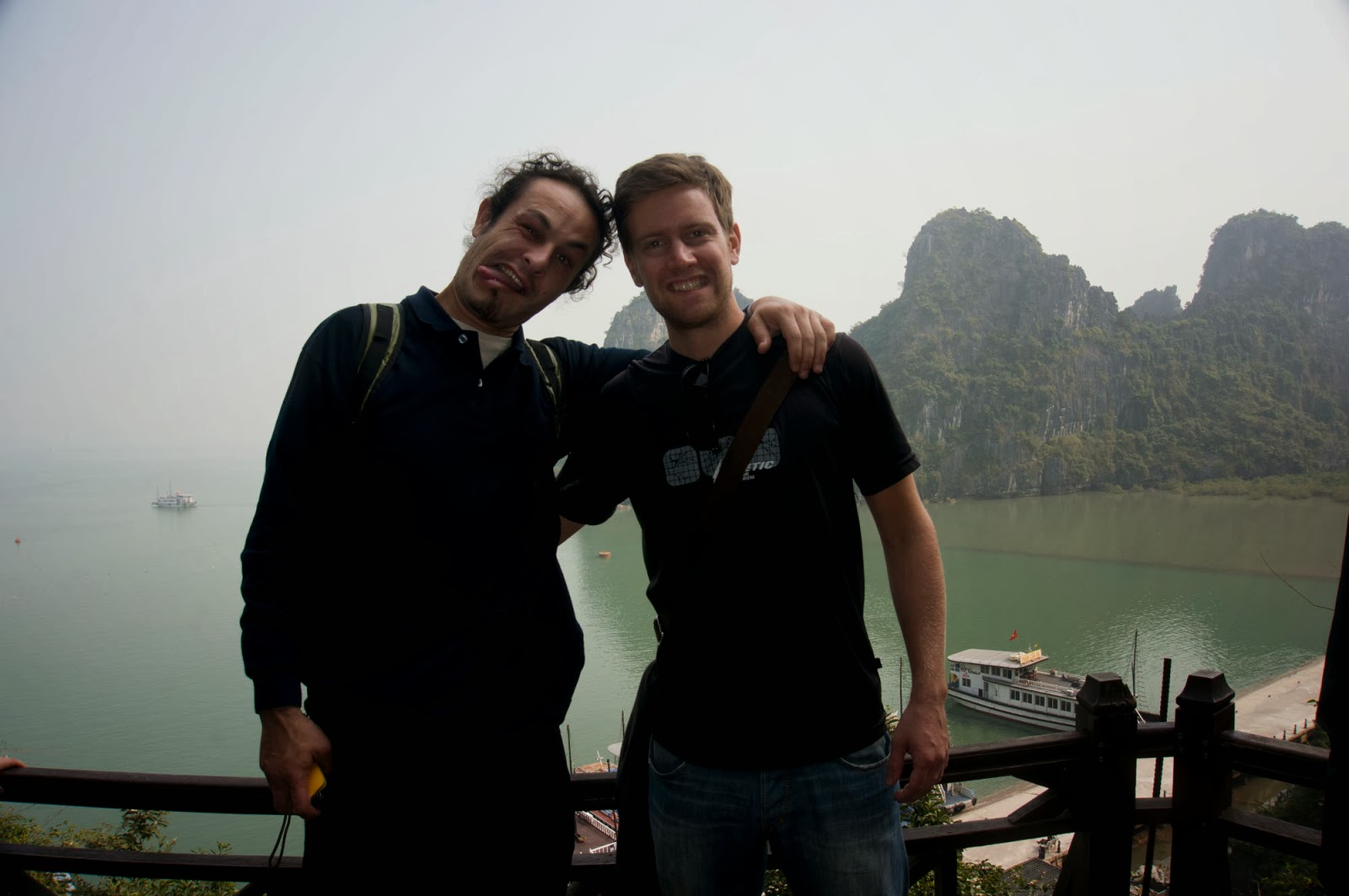 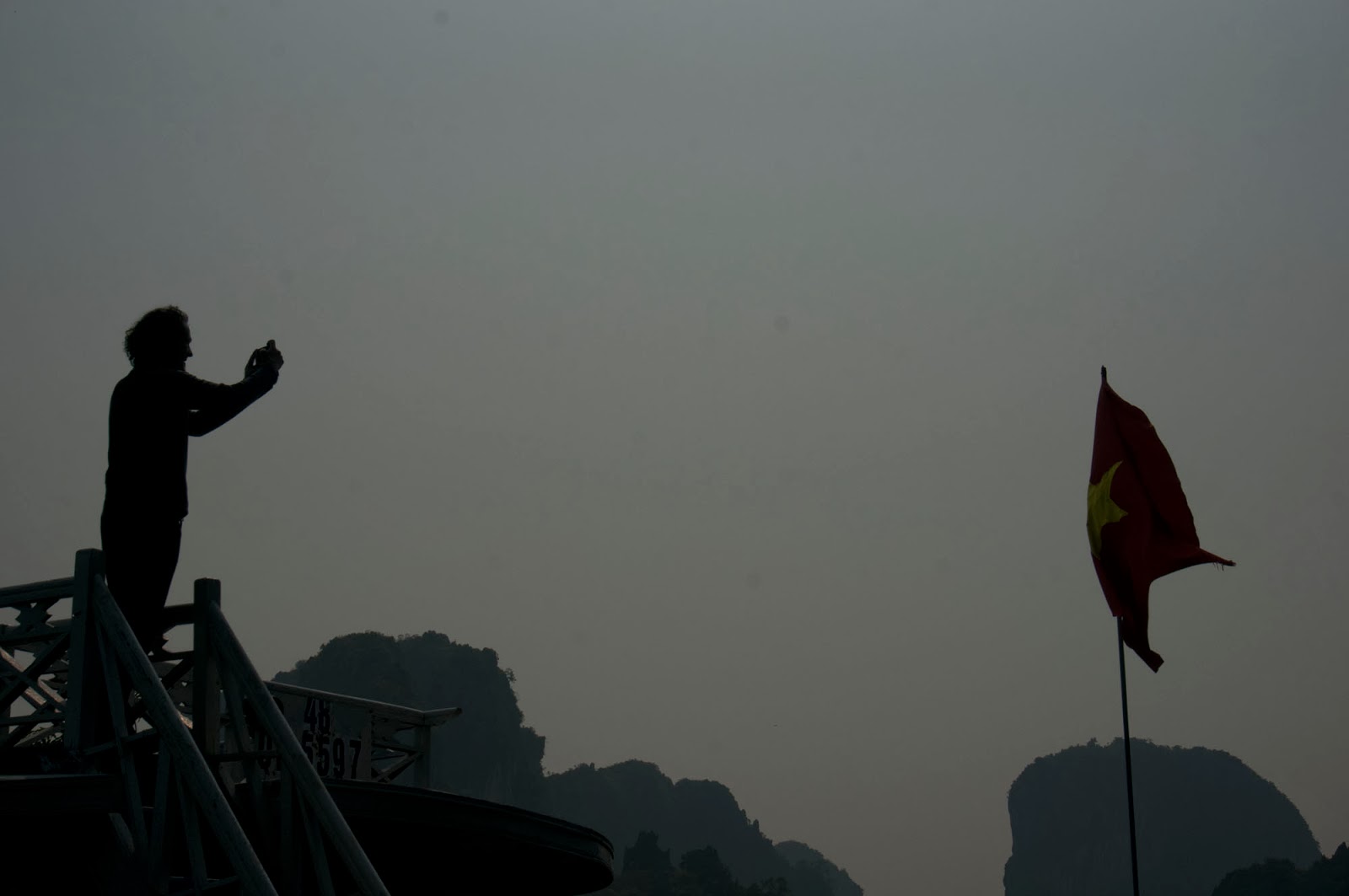 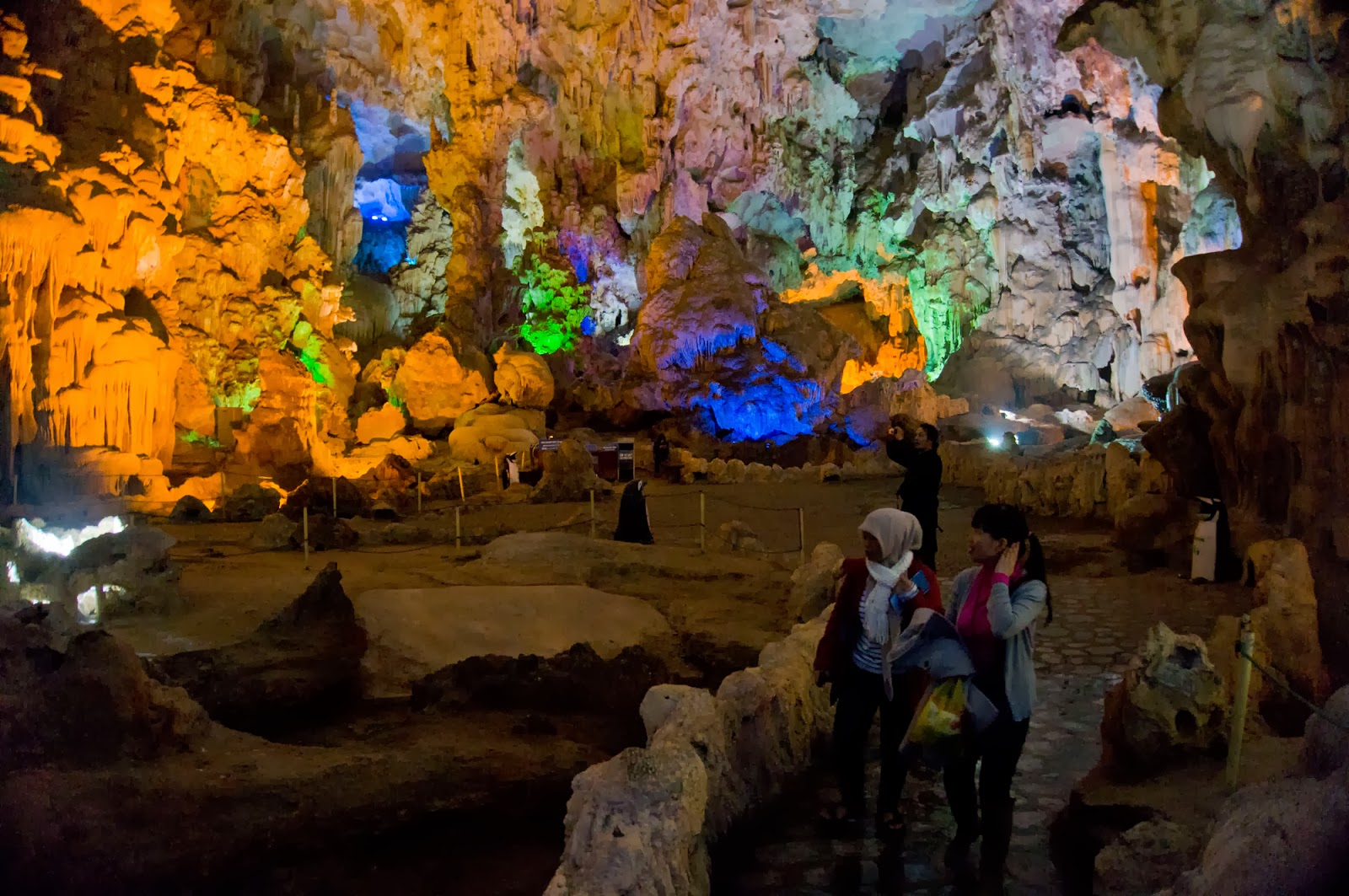 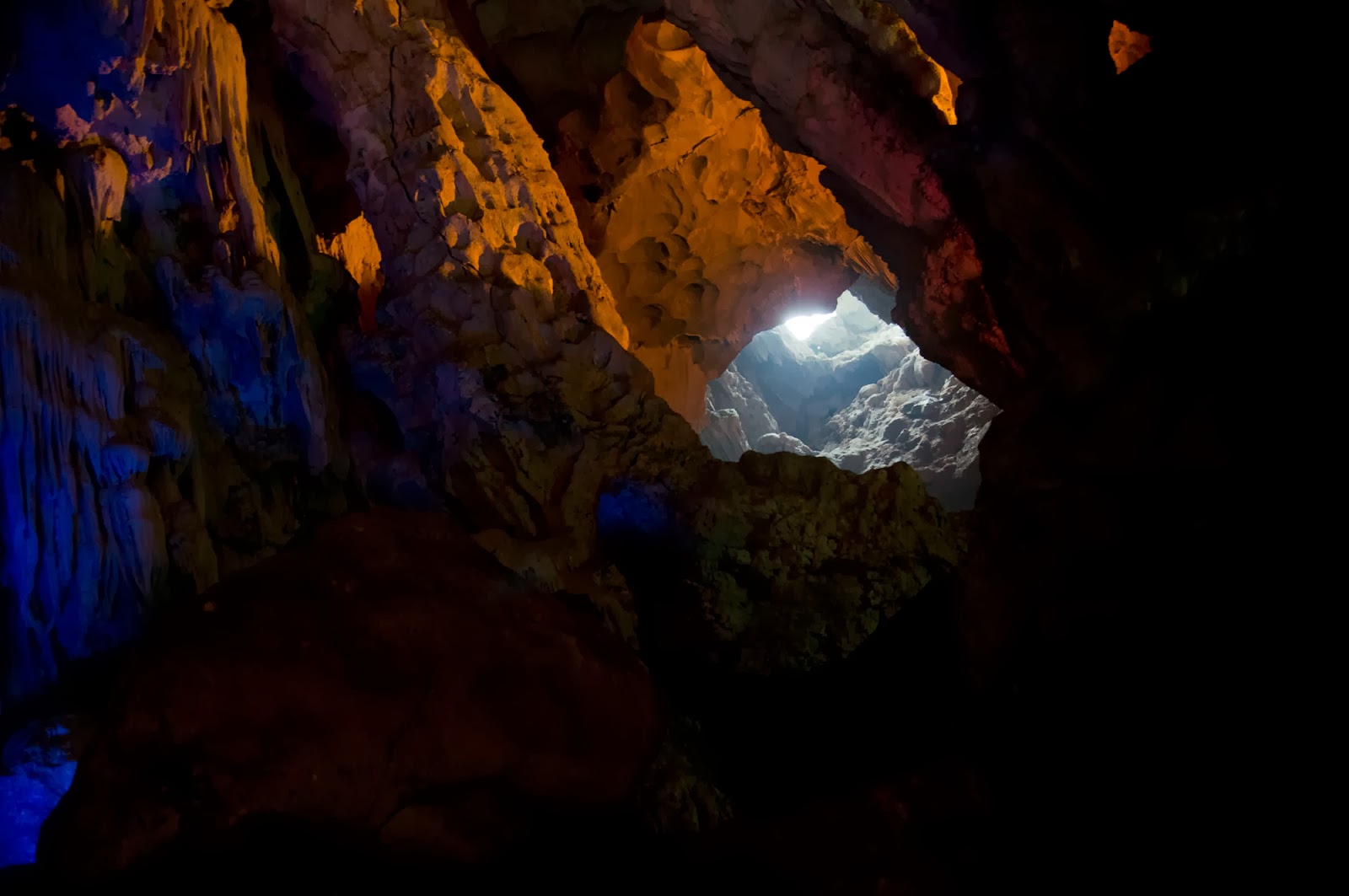 The bay was really beautiful and also the cave we visited. After the bay tour all of us had lunch and of course some coffee after. In the evening Linh and I made spring rolls that was really tasty, of course because we made them. And after dinner we went on a little motorcycle ride around town and to a nearby island. The next day the alarm woke me up at 6 a clock, I wanted an early start because the plan was to ride 150 km to the capital Hanoi. So after a noodle soup I got on the bike with a long day ahead of me. The ride went better than expected and I got into Hanoi around 5 pm. I knew the traffic in the city would be crazy and you really got to watch for motorbikes coming from all directions.
In the evening me and my host Hien went to her friend’s house for some really nice Korean / Viatnamese food. Then we had a little walk around the city and ended up at a nice café overlooking a lake. And on Monday I did some sightseeing around the city at a temple and the Ho Chi Minh Mausoleum. 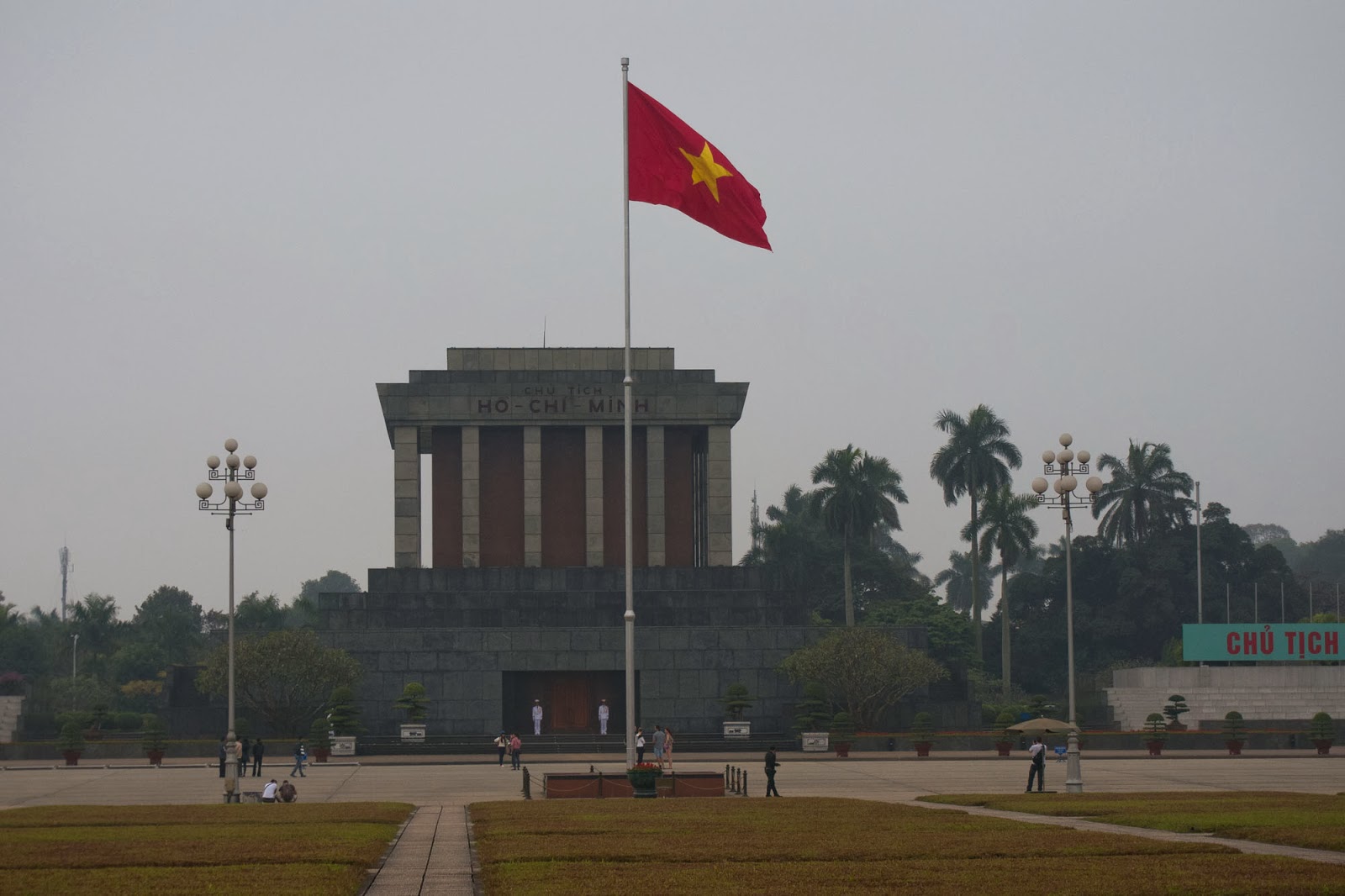 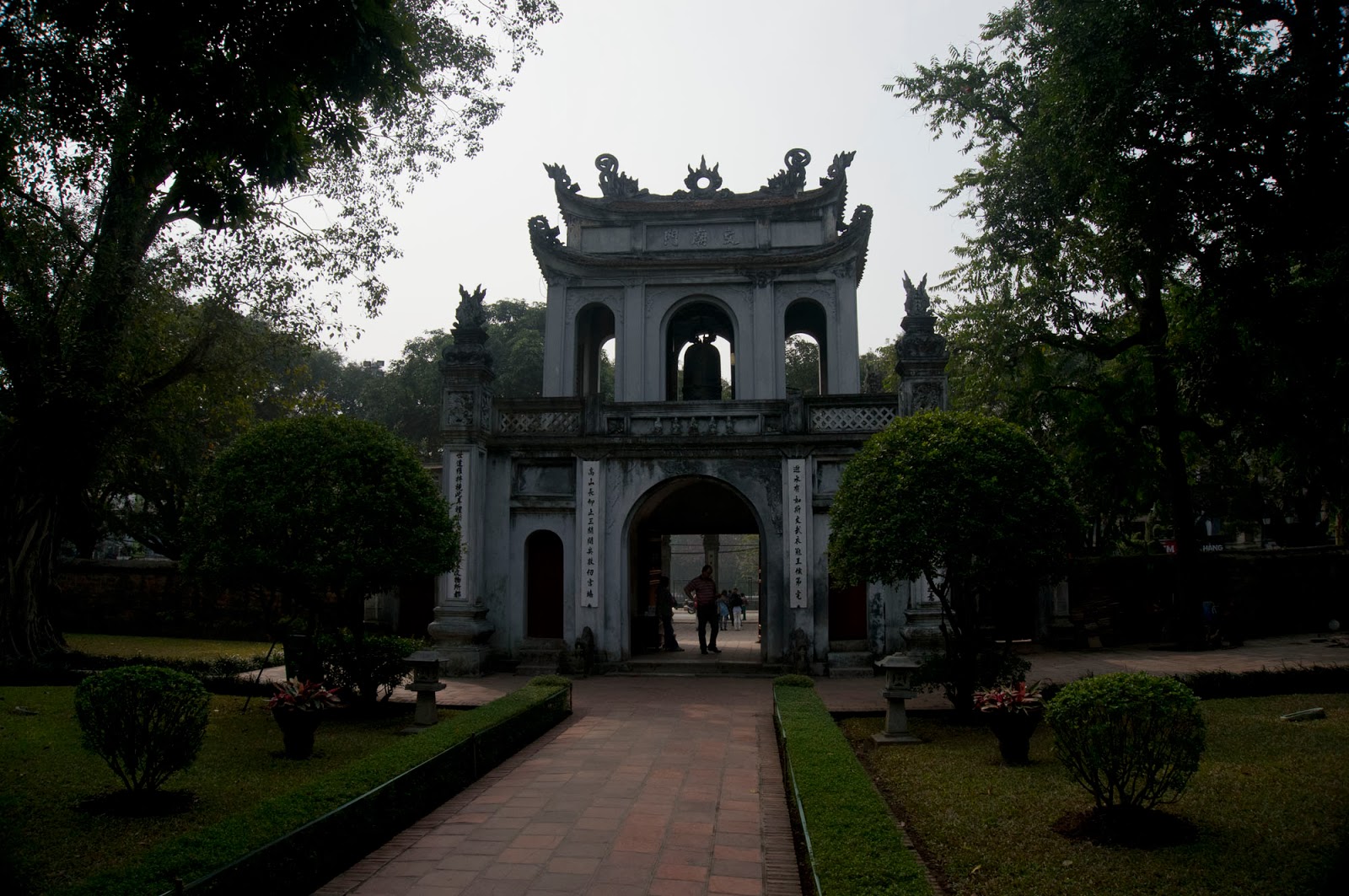 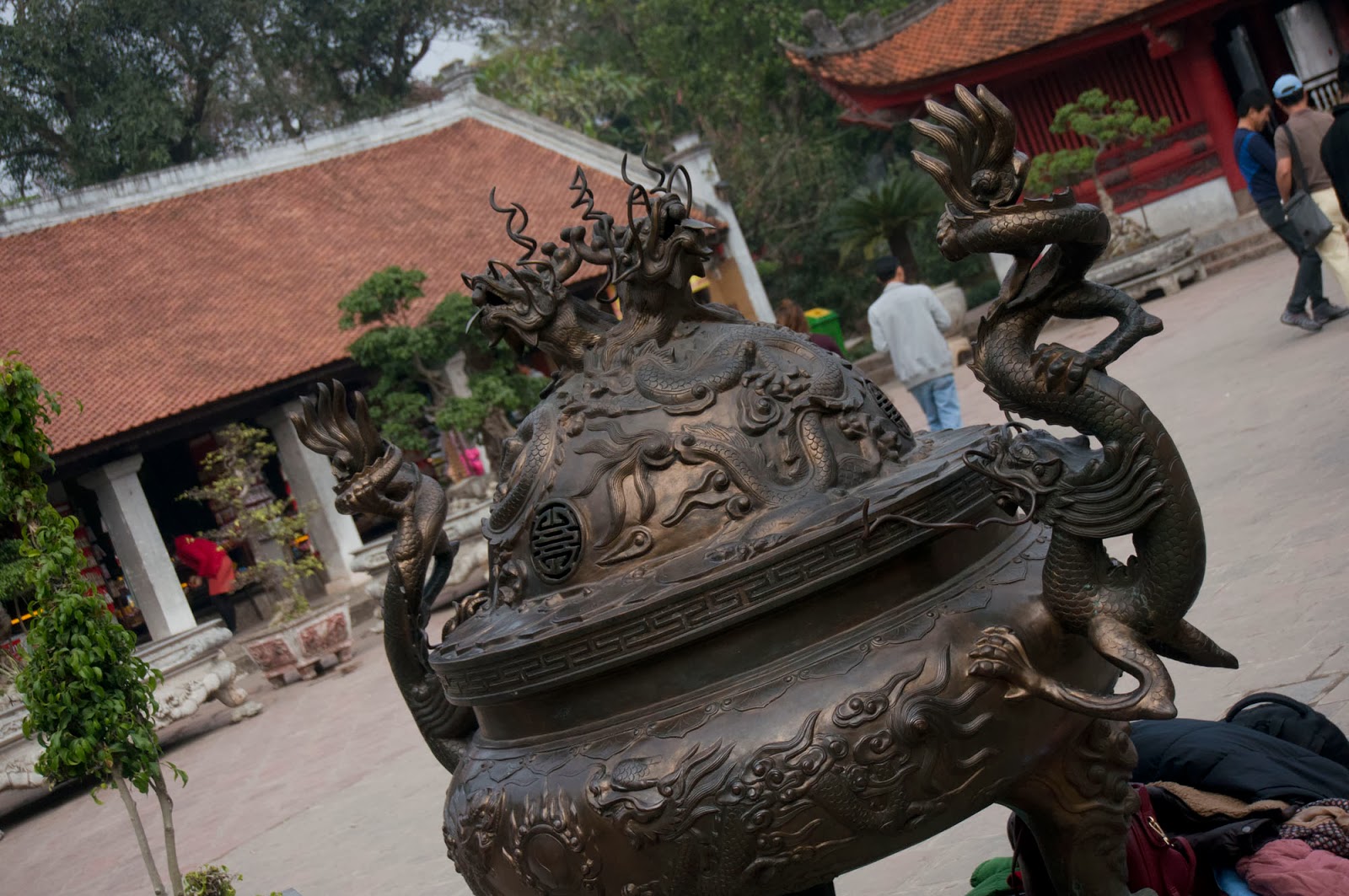 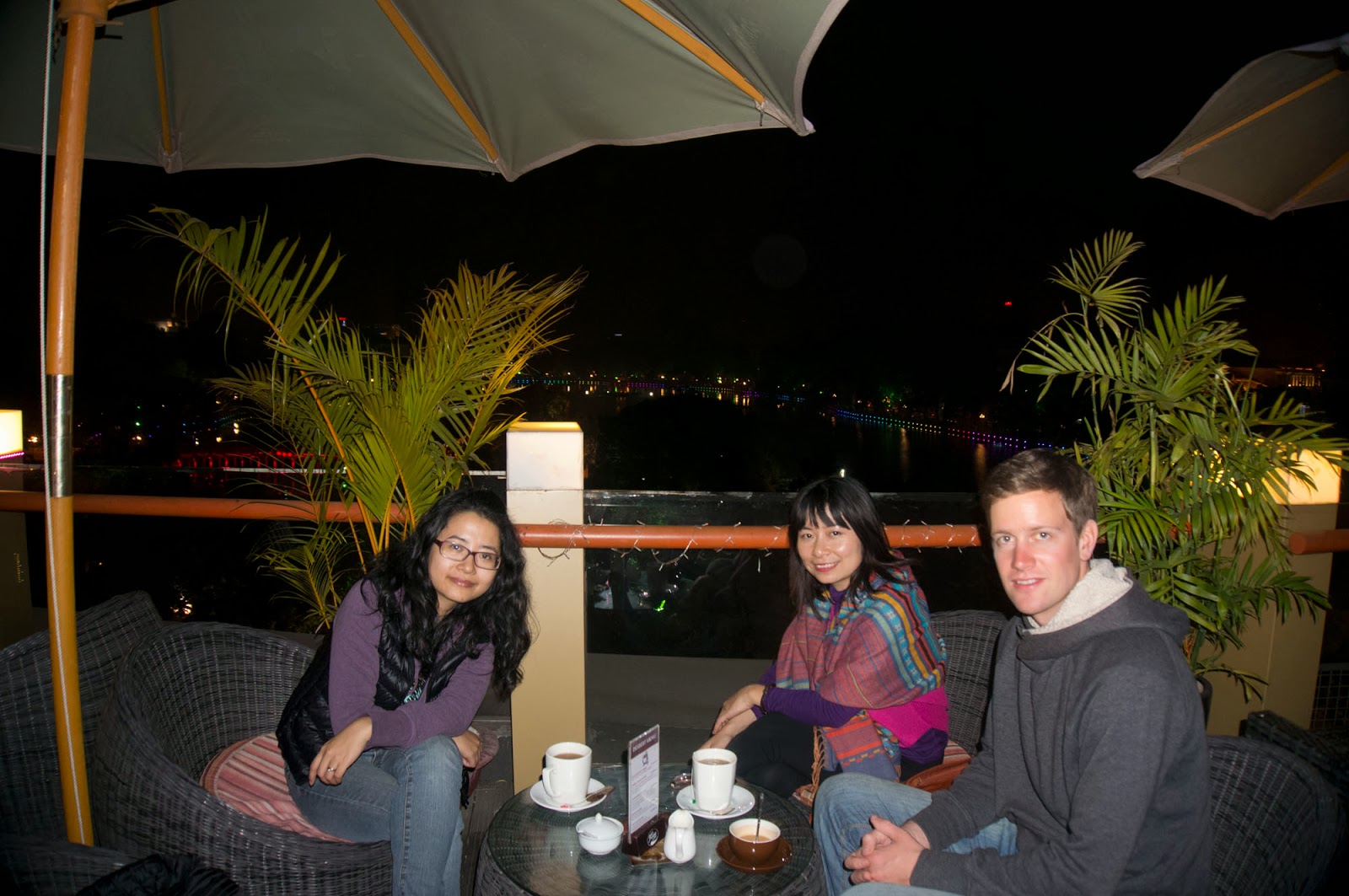 Yesterday Hien and I had decided to go for a bike ride around the West Lake. The weather was perfect for a ride with some clouds and around 20 degrees. It was a beautiful ride on a nice path along the waterside. 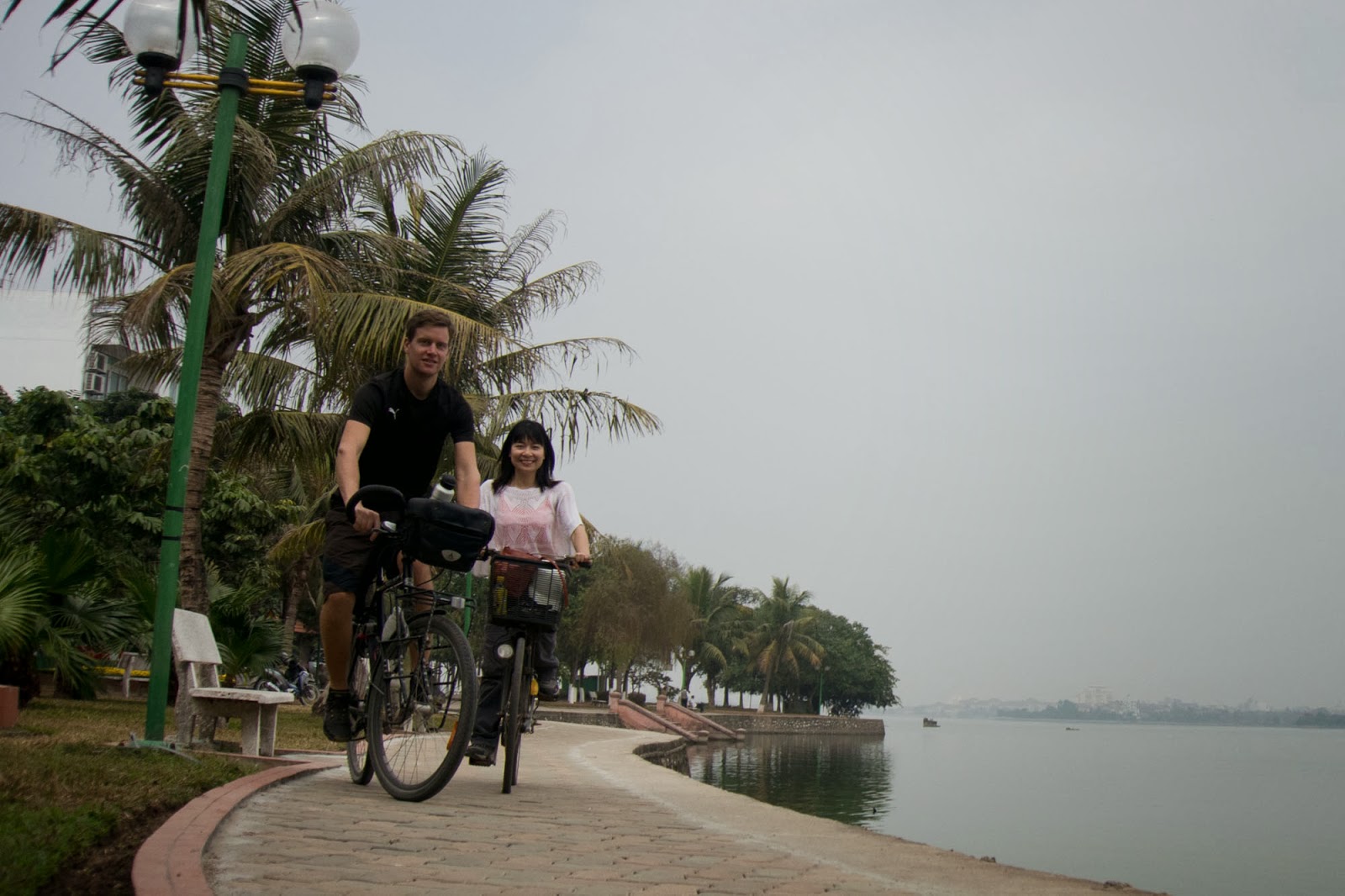 After that we went to the war museum that witch was of course a bit depressing but also interesting to see. After a tour around the museum we cycled on to the cinema to see the The Hobbit and later had a nice dinner before cycling back late at night. 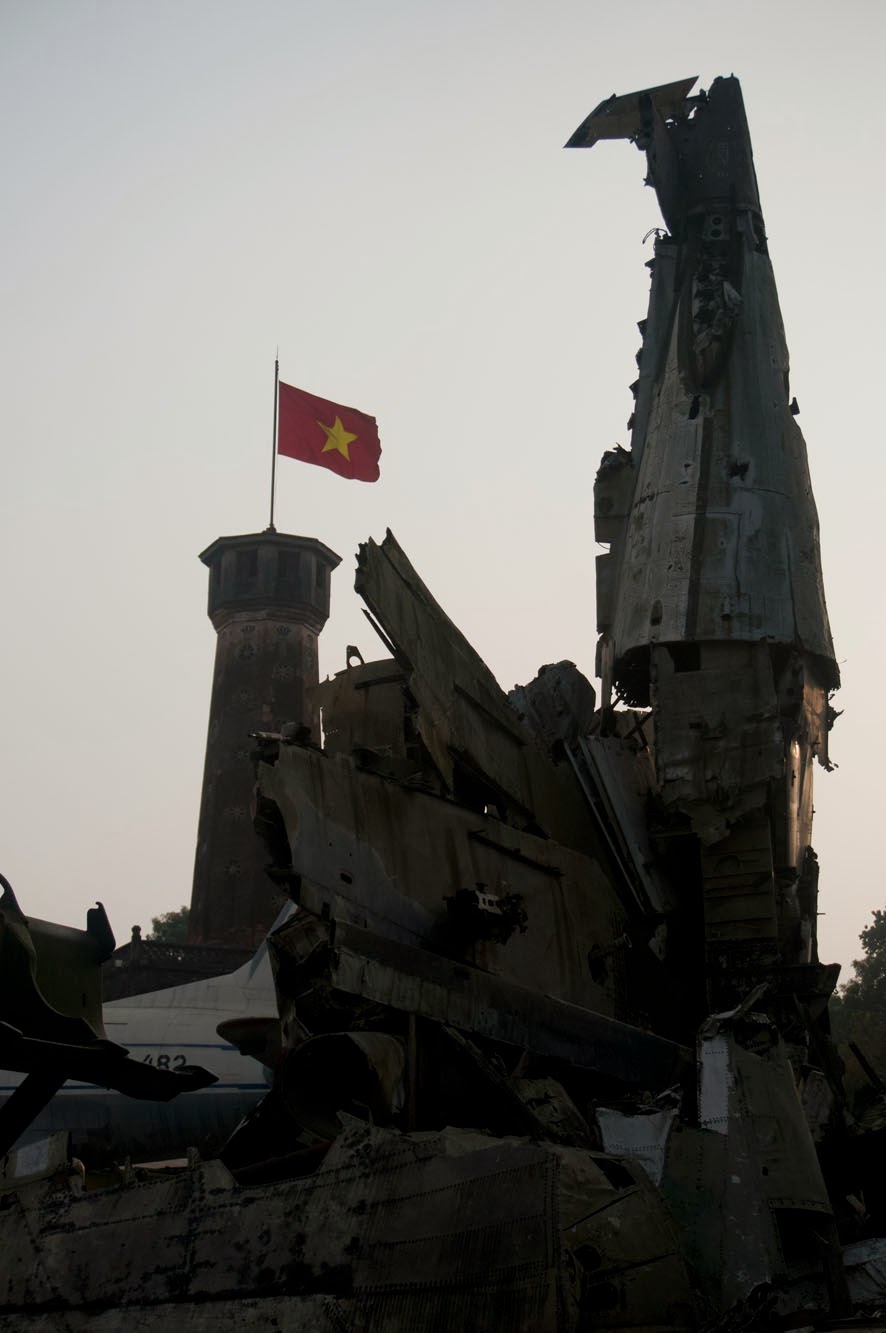 Today I’ll pick up my visa for Laos and continue south tomorrow. It feels great to be back on the move and I’m really looking forward to the rest of South East Asia…
Upplagd av Samuel Eriksson kl. 23:30