Waiting for a package again.


I’m still in Finike waiting for the pannier to arrive here from Greece. Hopefully I won’t have as much problem this time as I had with the Greek post office when I was in Athens.

The last couple of days I’ve really felt like getting back on the bike and continue on cycling. But the weather has been a bit rainy the last days, and the forecast doesn’t look too good. So it’s nice to stay here for a while since I’m not in a hurry at the time. The only date I have to be somewhere is the 22th of February when I’m meeting my parents in Cyprus. I’m really looking forward to seeing them and spending a week together before I get back to Turkey and continue on east towards the Iranian border.
Upplagd av Samuel Eriksson kl. 12:55 1 kommentar:


My original plan was to cycle to Cyprus where I had gotten a good deal on an apartment. And there I would stay until the east of Turkey was a little warmer and nicer to cycle trough. But now when I was upgraded to this nice apartment here in Finike I decided to stay here for a little while. One reason why is that I’m waiting for a replacement of the back pannier that had broken and the company that helped me get a new one from Vaude will send it here. After that I will continue along the cost without hurry and eventually take the ferry from Taşucu to Cyprus where I will meet up with my parents for a week. 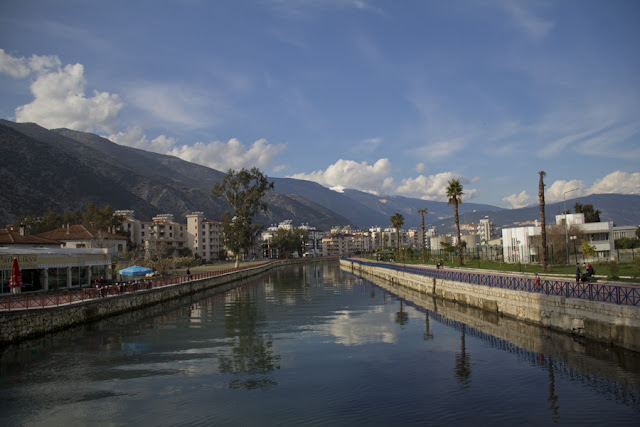 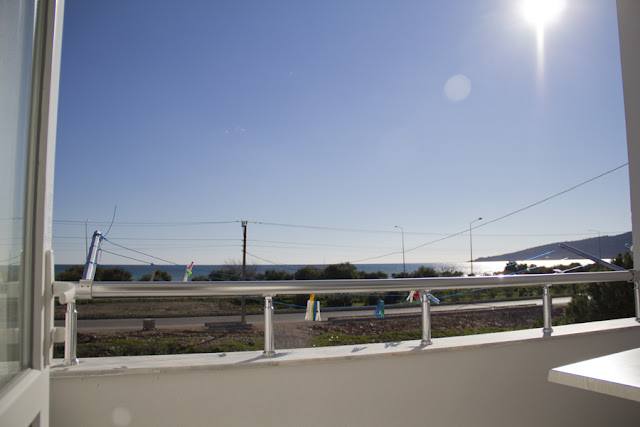 Finike is a beautiful place for some relaxation. The apartment is right by the sea and not far from the mountains for some hiking and bike riding. Today I took a trip up the mountain on my bike on a small gravel road up to 1500 meter above sea level. It took some time getting up there, but the view was amazing with the Mediterranean Sea on one side and snow covered mountains on the other. I just wished I had a nice mountain bike with suspension because the way down was very bumpy. But I took my time and stopped to look out over the valley and listen to prayers echoing from dozen of mosques down below. 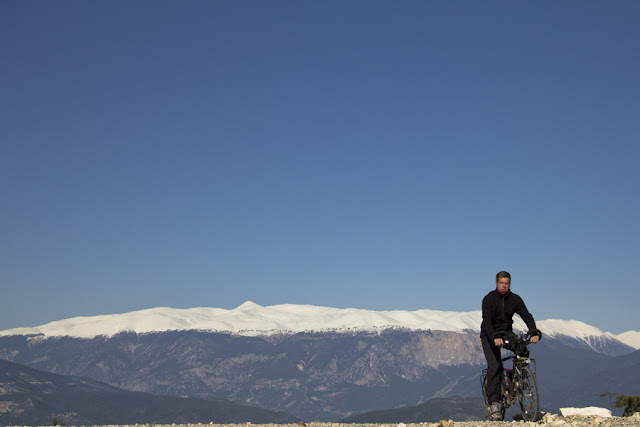 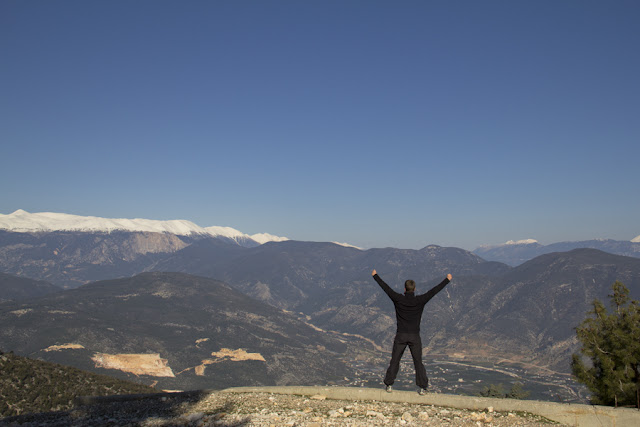 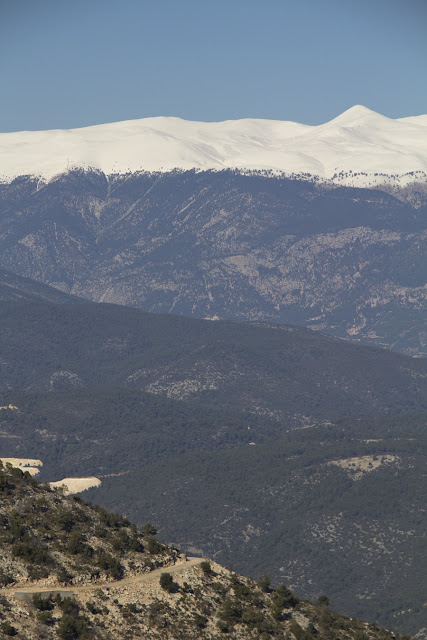 Another thing I’m doing while being still for a while is to get in shape. When cycling all day most days there is no problem with my stamina, but when you have been on the bike all day there is no energy left for some sit-ups or pull-ups. And I feel that I need to keep the rest of my body strong so that I don’t have any problem with my back or something else.
Upplagd av Samuel Eriksson kl. 08:38 Inga kommentarer:


2013 started off with leaving Fethiye after spending a couple of comfortable days at a nice hotel there. Even though I feel more at home in a hostel or in the comfort of my tent it was nice and relaxing and a good place to wait out a few days of rain and to celebrate New Year’s Eve. When I cycled in to Fethiye it was raining badly and with all the clouds I didn’t see much of the views. But the morning I left there where blue skies to begin with and the view of the snow covered mountains was beautiful. 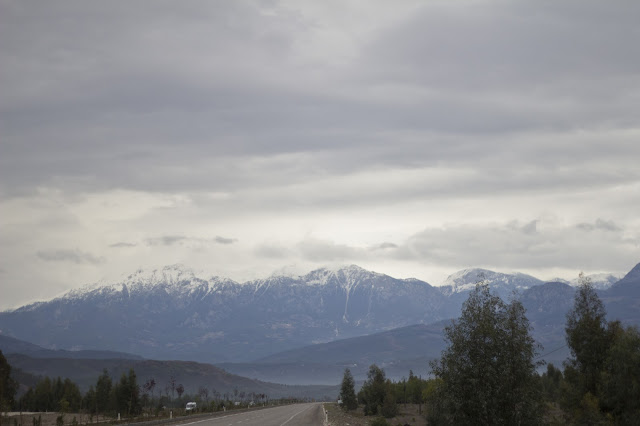 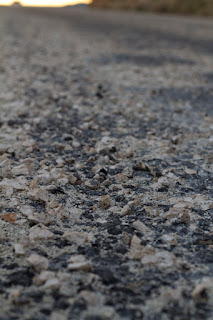 At first I had planned to cycle to Patara and spend a night there. But I made good distance today and thought I could make it to Kas and check into a hostel there. I thought it would me a nice ride along the cost. It started with a big uphill and continued on beautiful road but on crappy surface. The road was asphalt but for some reason on many roads here in Turkey there is gravel “glued” on top of the nice asphalt and this road was very worn so that the gravel had come loose, making the ride very bumpy. So I started to regret not stopping earlier when I realized I wouldn’t make it to Kas while it was light out. But I kept going and arrived in a dark Kas later in the evening completely exhausted after 110 km.
I stayed another day in Kas resting up after a rough day before and got back on the bike the day after for a ride to Finike. I knew the day would start with a big uphill, but I was prepared for it and after about 10 km of constant uphill there were a few straights and downhill’s among more uphill’s. But the ride was beautiful with mountain peaks covered with snow cycling through valleys with small villages among the hills. 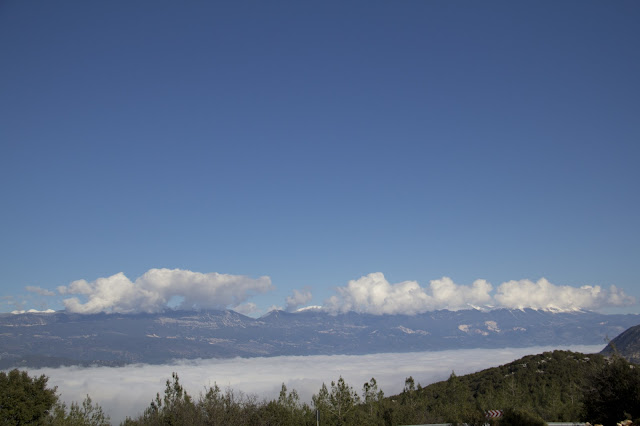 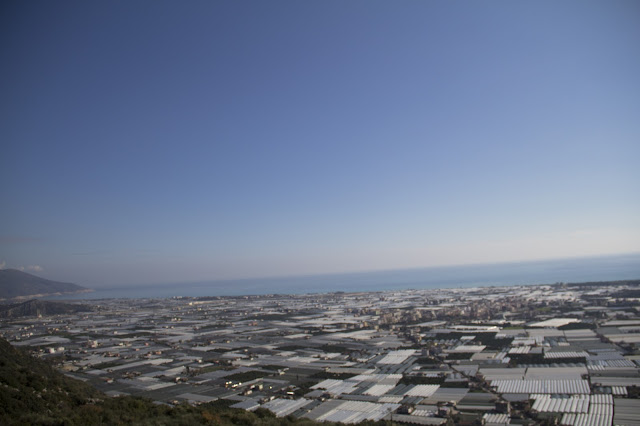 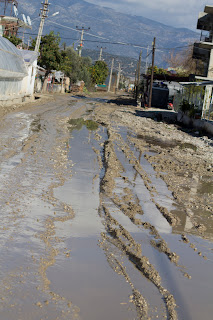 Later the road started going down again towards the sea and the city of Demre. The view of the city from the hills was particular since most of the area is covered with greenhouses. I made one wrong turn in the city trying to take a short cut that ended up being a wet muddy terrible road, and worst of all after I cycled the road for a while I came to where they were working on the road only to be told that I had to turn around and cycle back through the mud again.
The last bit towards Finike was a great road along the sea side, and when sitting down for lunch on the beach the sun was nice and warm and for the first time in a while I didn’t need to get back on the bike to stay warm. I had looked up a nice and cheap hotel in Finike where I planned to stay the night. When I arrived the nice man at the hotel then offered me a very nice and big apartment instead of a small hotel room for the same price. So now I’m living comfortably in a three room apartment with a nice kitchen, two balconies with a view of the sea, a huge bed, three TV’s, Wi-Fi and for some reason three bathrooms!! And the best thing: breakfast buffet =)
Upplagd av Samuel Eriksson kl. 07:49 2 kommentarer: