When leaving Yixing I got a message from my host in Hangzhou telling me there would be a typhoon hitting the city the next days. And when I took a look at the weather forecast I saw there where a lot of rain expected during the day. But the most important thing was still on my side; the wind. So with the wind in my back I managed to set a new distance record of 179 km during one day. But my shoes were soaking wet when I arrived in the huge city of Hangzhou just as it had become dark. 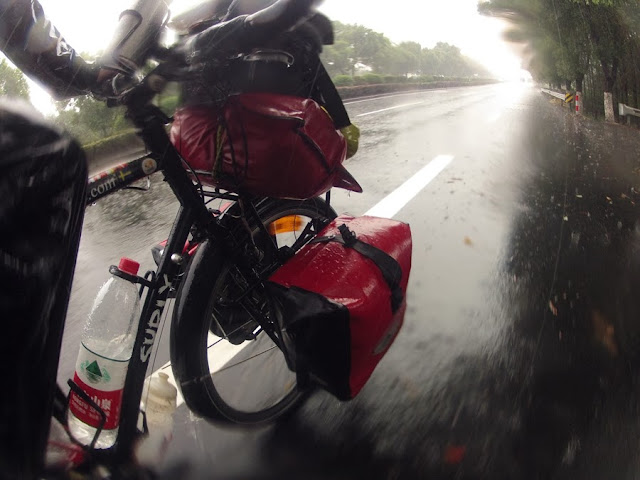 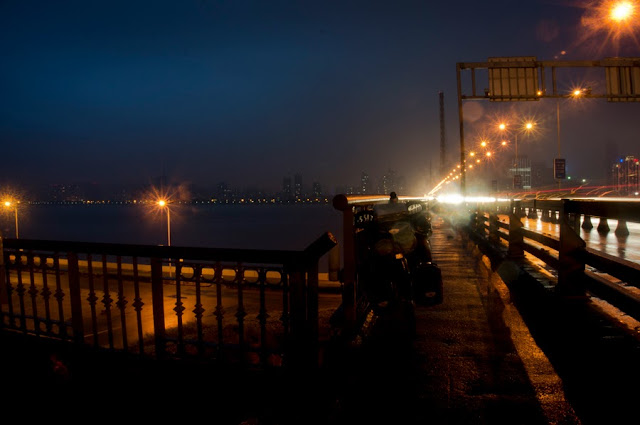 There I stayed with a great guy named Roy who was from the Philippines and was teaching English at a school there. And while typhoon Fittow was raging on outside I had a very relaxing day on the couch instead of running around in the flooded streets in downtown. The next day Roy and I wanted to do something even if the rain kept on pouring down. So we decided to go for a foot massage which was really nice but also tickly. We later met up with Roy’s friend John and had a great dinner at “Grandma’s” and later joined Brandon who also was a teacher and had a couple of beers by the lake. 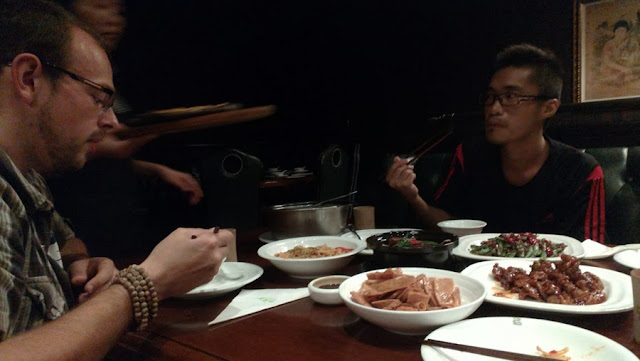 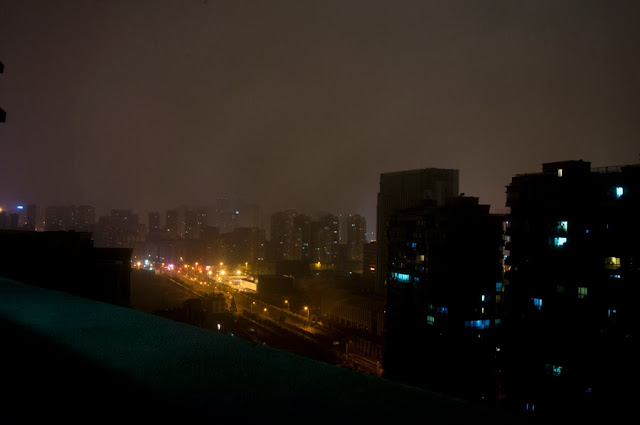 During the evening the rain had stopped and when I set out in the morning the weather felt good. But I could see on many roads how the water had risen quite far and as a result some roads were really muddy and dirty. After I had rode my bike for a while I came by another cyclist who also was going to Yiwu. Lifeng and I cycled together the rest of the day, and it was really nice to have someone to ride with again. And after I talked to my host in Yiwu my new bicycle buddy also got invited to stay at his place. 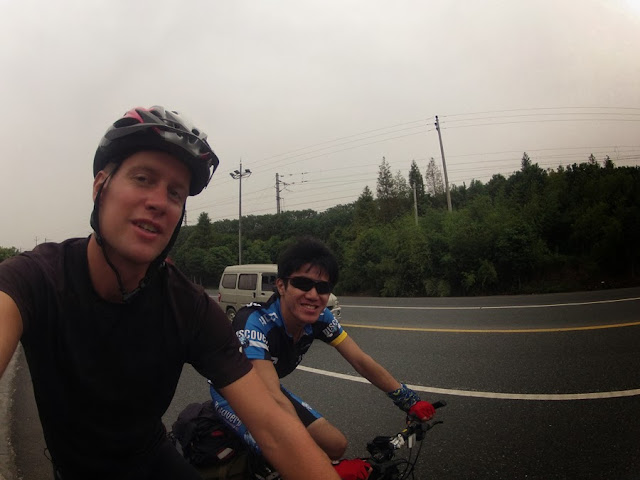 We arrived a little tired to the city and met up with Mauricio who was like many others in this city working with export. I had never seen so many foreigners in a city in China before and we even went out to eat western food(second time I used fork and knife in the last 6 weeks). We had a good night together over a couple of beers, but my new bicycle friend wasn’t used to the life on the road and took a few naps in the bar while Mauricio and I were having fun. I guess it takes a little practice to ride the bike all day and still have enough energy left to go out and have fun. 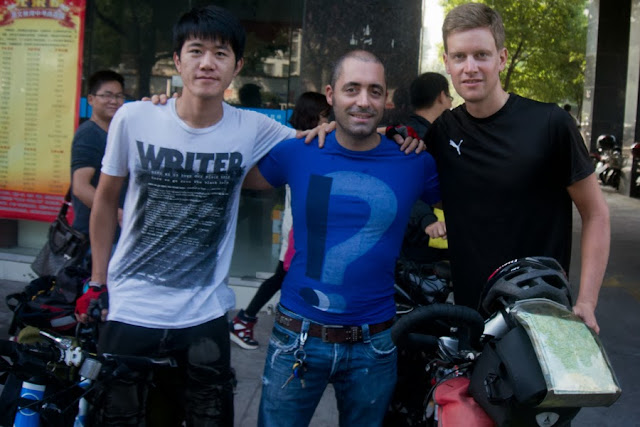 The next stop on my road was Quzhou, but Lifeng had other plans and headed out in another direction in the morning. So I cycled alone again and met up with my host Serenity in the city. We had some tasty Korean food and then she jumped up on the back of my bike and we cycled to her place. I didn’t know my bike could accommodate passengers, but it worked just fine. That night we met up with some of her friends at KTV. And for those who haven’t been to China, KTV is a place for karaoke with many private rooms where we sang, drank, danced and had a great night.
The next day a journalist college of Serenity’s mom wanted to do an interview with me for the local newspaper. So me and Serenity met up with him and he showed me around the huge factory in town.  It was Interesting but maybe not the prettiest sight. 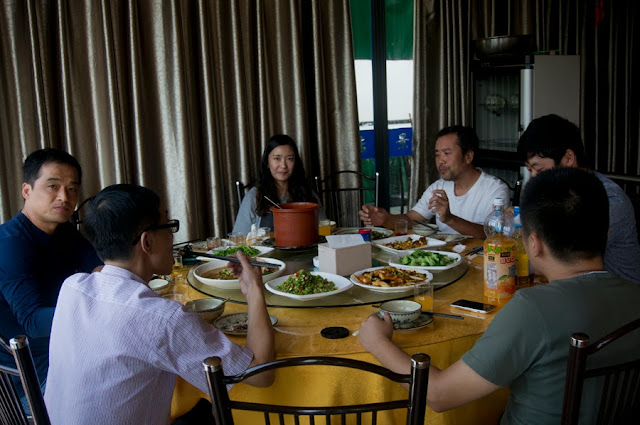 After a great lunch together with journalist’s and some more people Serenity, Clock(the journalist), his friend Hu and I went up into the mountains to a really nice lake. Me and Hu cycled there while Clock and Serenity where gliding next to us on an electric bike. So when arriving there all sweaty it was really nice to jump into the water and take a swim. It was a nice warm evening and I really enjoyed the place. It was quiet and almost just us there. A huge contrast from most places in China where there are people everywhere. Clock and Hu headed back to town after a nice dinner together at the restaurant while Serenity and I camped by the lake and didn’t go back into town until later in the evening next day. 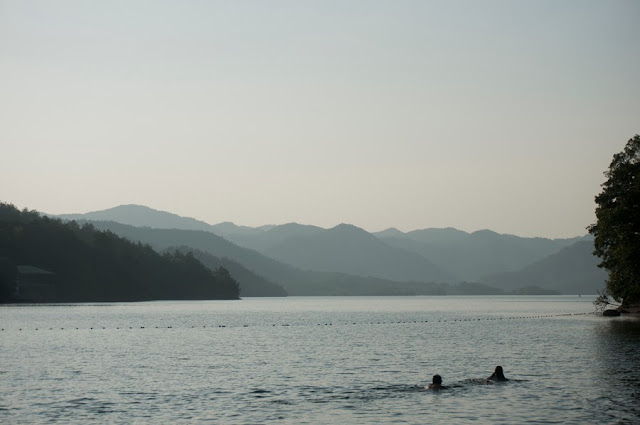 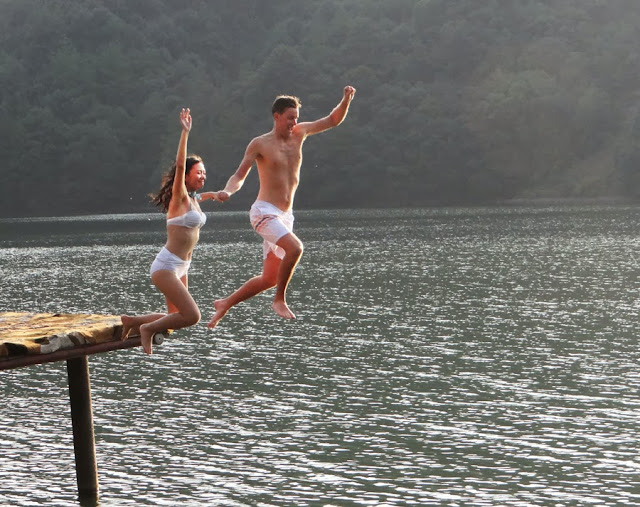 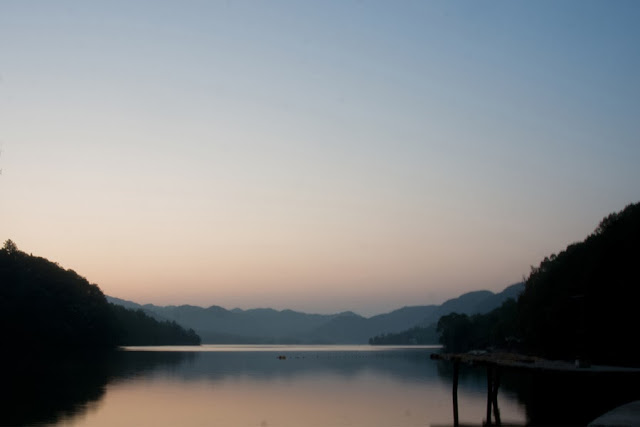 The next stop on my way towards Hong Kong was Shangrao. And it was easy riding on a nice warm day with the wind in my back. At one point I cycled by some teenage girls who wanted to talk a little. And later after I had cycled for a while they realized they hadn’t taken any photos, so they chased me down on their E-bikes and got some photos for QQ. It’s amazing the kind of attention you get as a foreigner in China, especially in smaller cities. 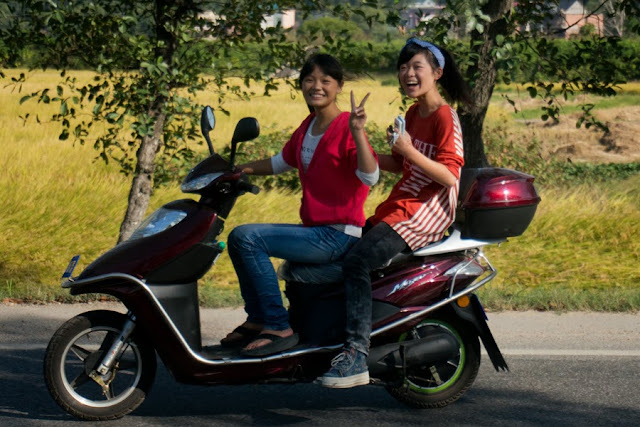 But in Shangrao I wasn’t the one getting the most attention. Because my host Iana is an Ukrainian girl with blond hair. So when Iana, her roommate Natalia went out we turned many heads around. And most eyes were on the blond foreign girl. 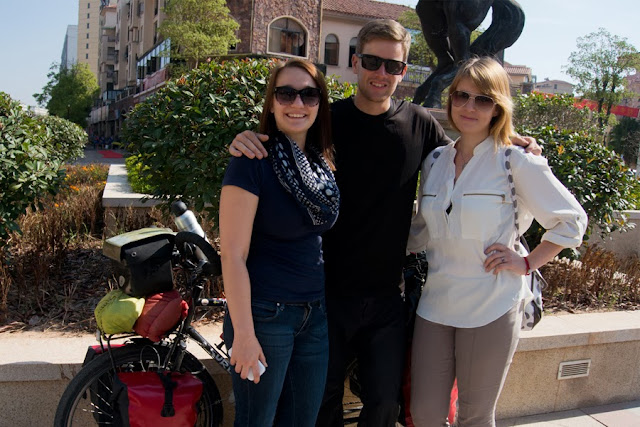 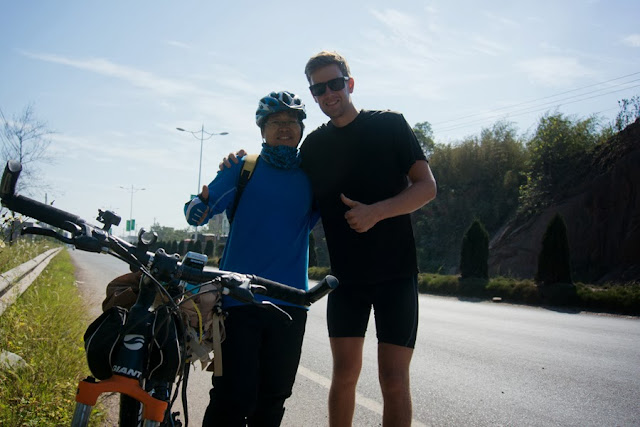 When leaving Shangrao I met another cyclist named Aaron. He spoke English and we were both headed to Yingtan today and then Fuzhou the next day. So we cycled together and it was really nice to have someone to ride with a second time this week. But in the evening we split up when he stopped at a hotel outside of town and I cycled into the city and met up with my host Sophia. We had a really nice night out in Yingtan and I spent the night at her father’s photography studio. There Sophia showed me pictures from the Unesco’s Longhushan Geopark. It looked amazing and we decided to go there in the morning. And the location was perfect on the way towards my next destination. Sophia’s friend and I met up with Aaron again and cycled out to the park. On the way we met another cyclist who also was going to Longhushan so he joined our little group. Once we were there we met up with Sophia and her friend and rode around the big park in his car. It was a beautiful place with some amazing rock formations and an acrobatic show depicting how ancient people might have gotten the coffins into the crevasses in the mountain. 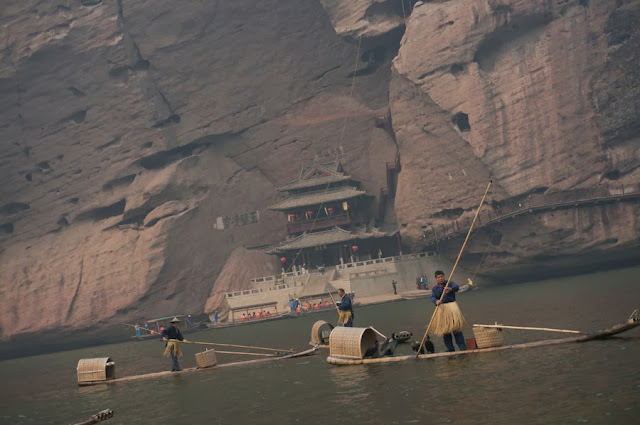 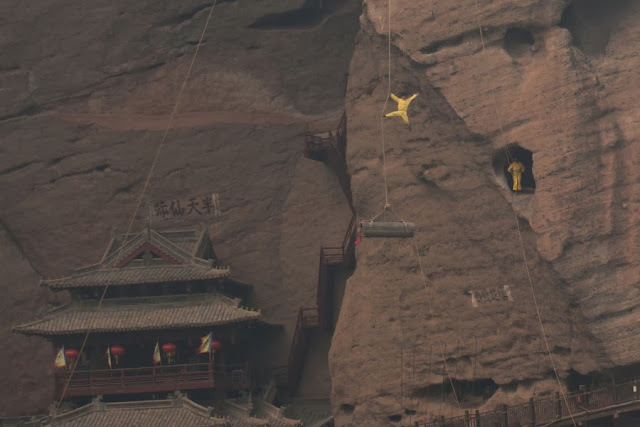 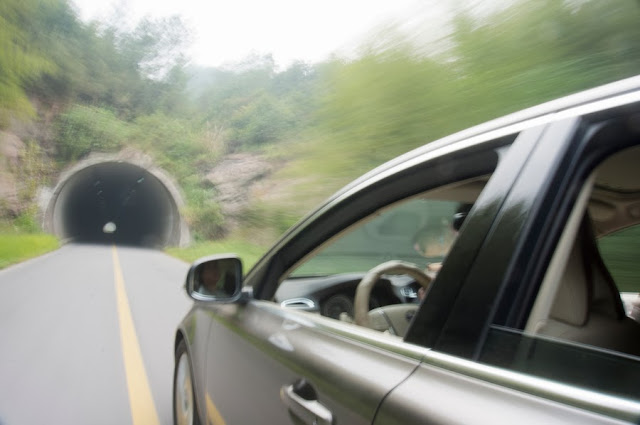 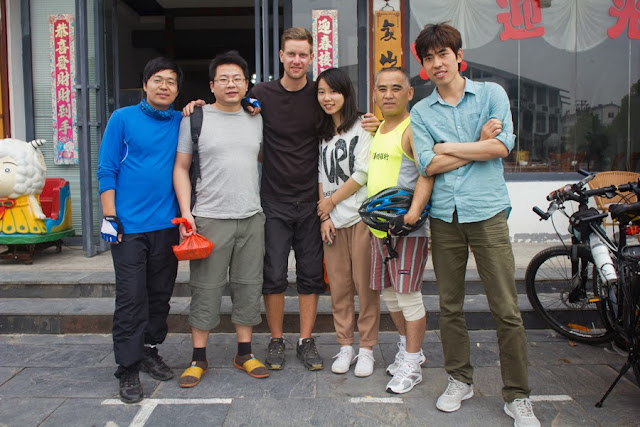 After we all had a nice lunch together Aaron and I continued on to Fuzhou. We only had about 80 km left but the wind started picking up and we were a little tired when arriving. Aaron invited me to have dinner at his father in law’s place and then helped me to find a nice and cheap hotel. It was a little strange walking into an empty hotel room after having been lucky to have couchsurfing hosts for almost two weeks in a row. It has really been an amazing time and I have made many new friends and met a lot of cool and interesting people. For me now the trip is much more about the people I meet then the places I see. And I can’t imagine this trip without meeting local people along the way. But I still enjoy getting up on the bike, blasting great music in my headphones and pushing myself during the day.
The road from Fuzhou to Ji’an was really nice with not so much traffic and no big cities along the way. I haven’t before had to plan where to stop and eat since China is so densely populated that there always is somewhere to stop and eat. It wasn’t as easy this day but I still found a little restaurant in a small village. And the three women sitting at the table looked like they saw an UFO when I walked in and asked for food. I got some rise and what looked to be leftovers. But that was fine by me especially since they didn’t want any money for it. That night I camped out in my tent among the green hills. It’s always nice being back in the tent when you find a nice spot to pitch the tent. 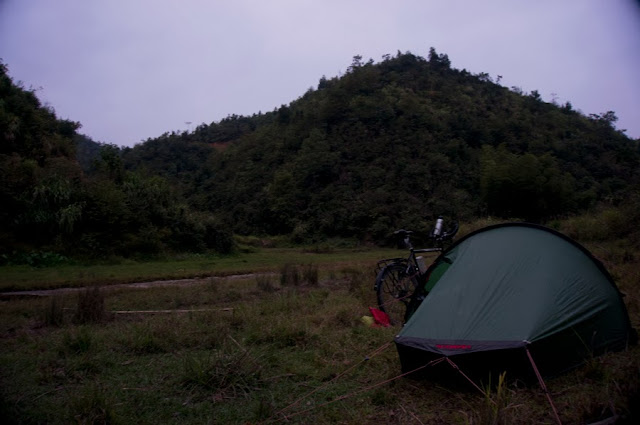 The next day I only had about 70 km to ride to get to Jishui where I met up with my host Chuck. We drove out to his father’s fish farm where we met up with a bunch of guys who were part of a bicycle group. We did some fishing but only manage to get two, one small and one really big but none by me. So Chuck and his father and mother took out the net to get enough for a great dinner for all of us. 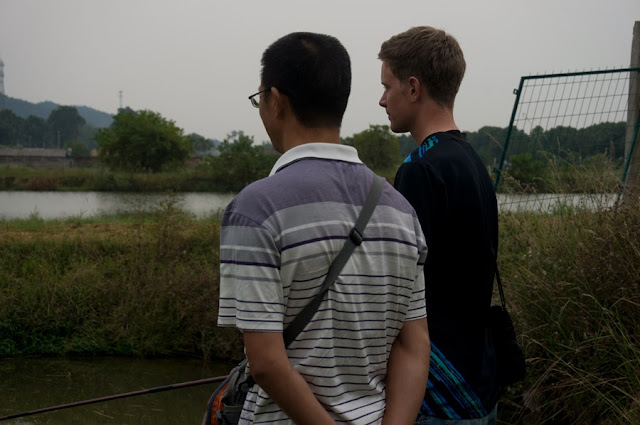 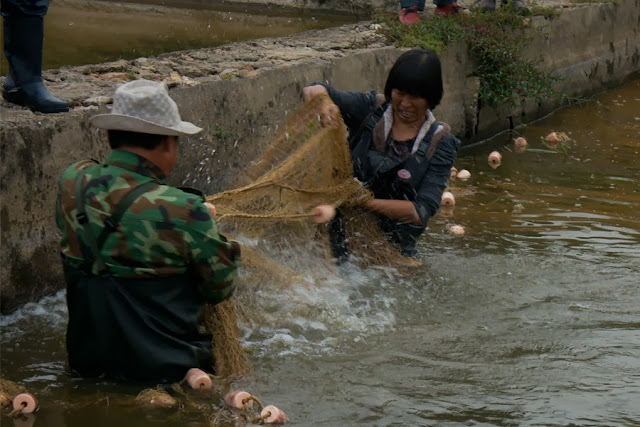 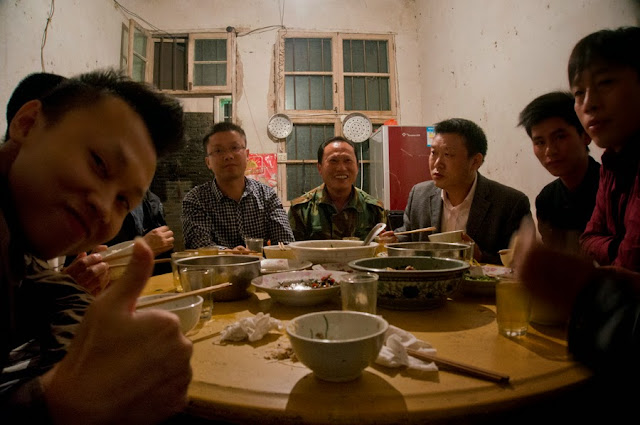 We later headed back into town and met some more people in a nice tea shop owned by one guy from the bicycle crew. If was nice to spend some time in a small town since most cities here are so big and noisy. In the morning Chuck and I met up with two other cyclists who joined me for the ride to Ji’an. But there we parted and I continued on my own to the town of Siuchuan where I’m staying for the night. I’m now closing in on Hong Kong and I still have enough time to get there before my visa expires. I also need to do some planning on where to go for when I come back into China. Eventually I’ll cross over from China to Laos, but there in between I don’t know where to go. We’ll see! I’m just hoping the next part of China will be as awesome as my time here has been so far…
Upplagd av Samuel Eriksson kl. 06:19