I was very happy to find that the road from Phnom Penh going east was paved and as smooth as it can be in Cambodia. I started early in the morning as I’ve been trying to do lately to have a little time at the beginning of the ride when it isn’t burning hot. But still, as soon as the sun shines on you it gets really hot again. 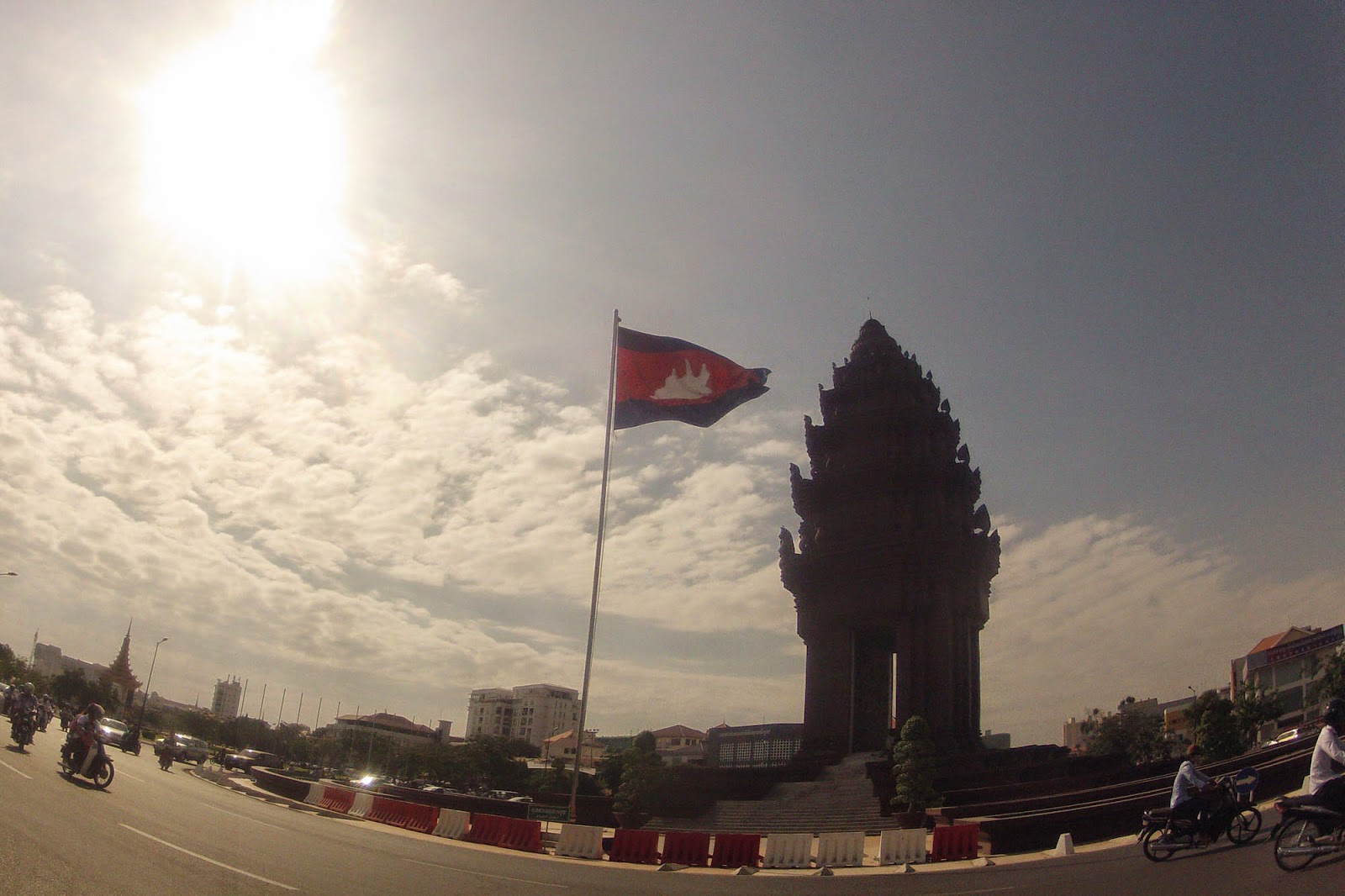 It would take me two days to get to the border and the first night I stayed in a little town that happened to have a little guest house, but not much more. When I walked around just before sunset it couldn’t find any restaurant. But as I continued on a small road leading into the village passing the market where I earlier bought some fruit I came across a nice lady who seemed to be selling some food. And after a little confusion I got me some BBQ chicken and sat there eating while villagers came by looking puzzled why a foreigner would be sitting there eating. I was most likely the only costumer at the little guest house and had to knock on the gate to have someone from the family let me in. I’ve gotten used to these kind of places and feel no need for air-condition and other luxuries, even though it’s nice sometimes. This night I was just happy that the ceiling fan didn’t fall down on me during the night since it was swinging wildly above my bed. 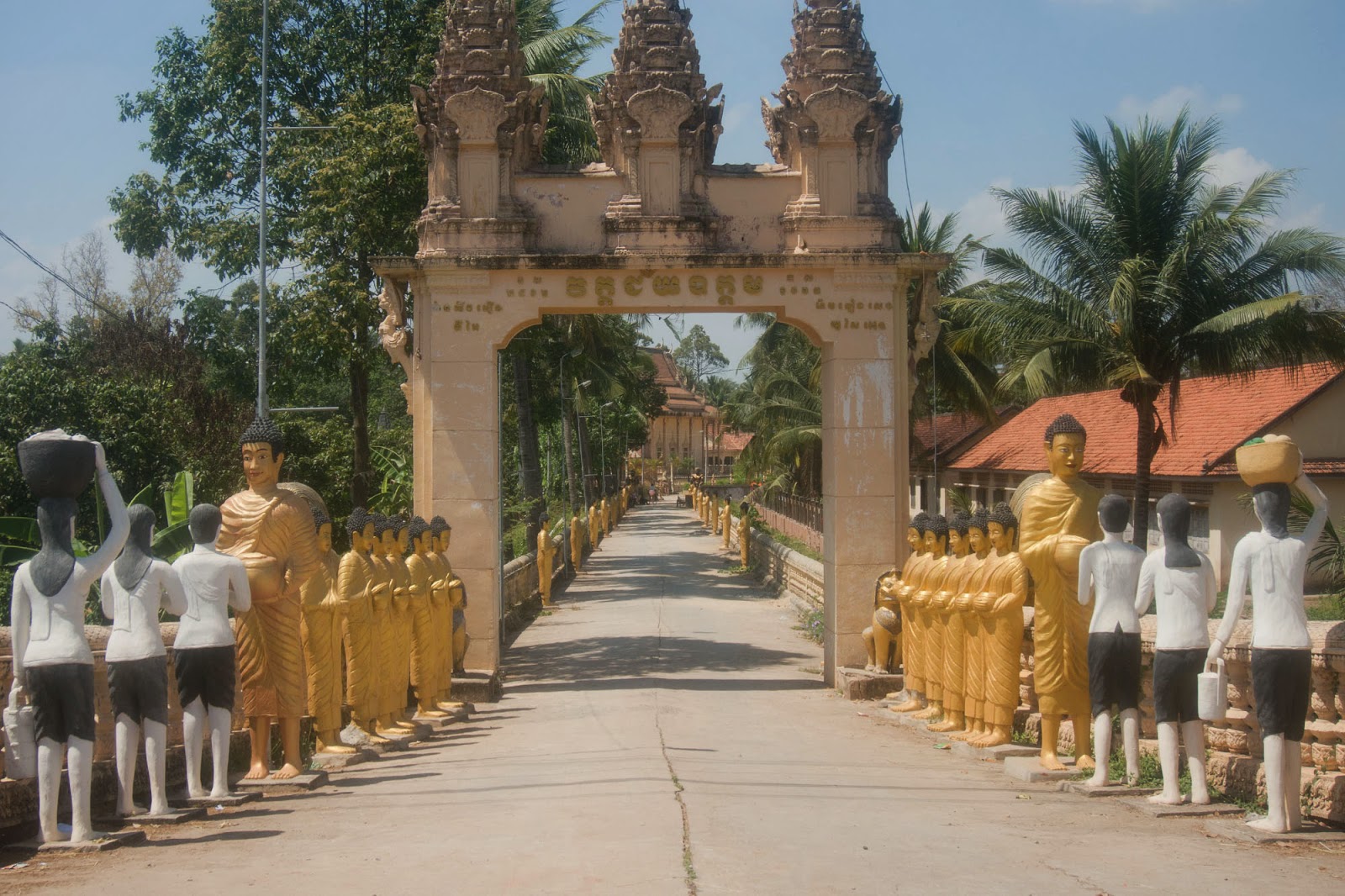 I continued on the next day fighting with a headwind for the 6th day in a row. I stopped at the border town of Bavet instead of continuing into Vietnam that day. But the next morning I left Cambodia and after a very fast and smooth border crossing I was back in Vietnam again, more than two months after I left Vietnam for Laos. 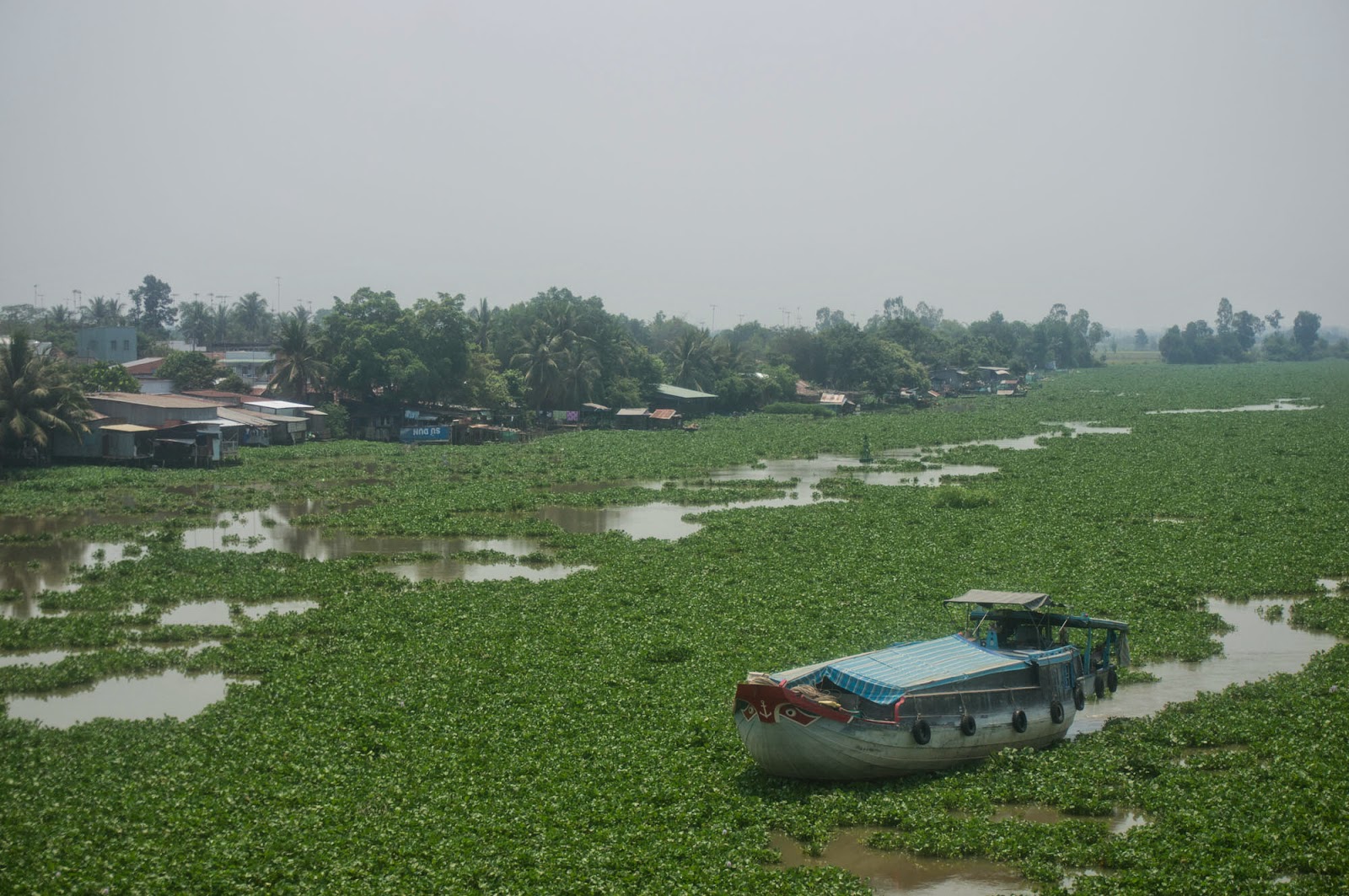 And one thing that was very different from the north was the weather. When I was there before it was a little cold some days and always very cold during the nights since the houses there aren’t really made for cold weather. So the contrast was huge when I now returned to the country and it was 35 degrees. But except for the weather it looked somewhat the same. Good roads when compared to Cambodia, more modern with wifi almost everywhere and the coffee shops, oh how I love the coffee shops here in Vietnam. Along the road there are countless and whenever I feel like a refreshing ice coffee the next place is just a few hundred meters ahead. And the best thing is that most places has hammocks where you lie down relax for a while and sip you’re coffee. 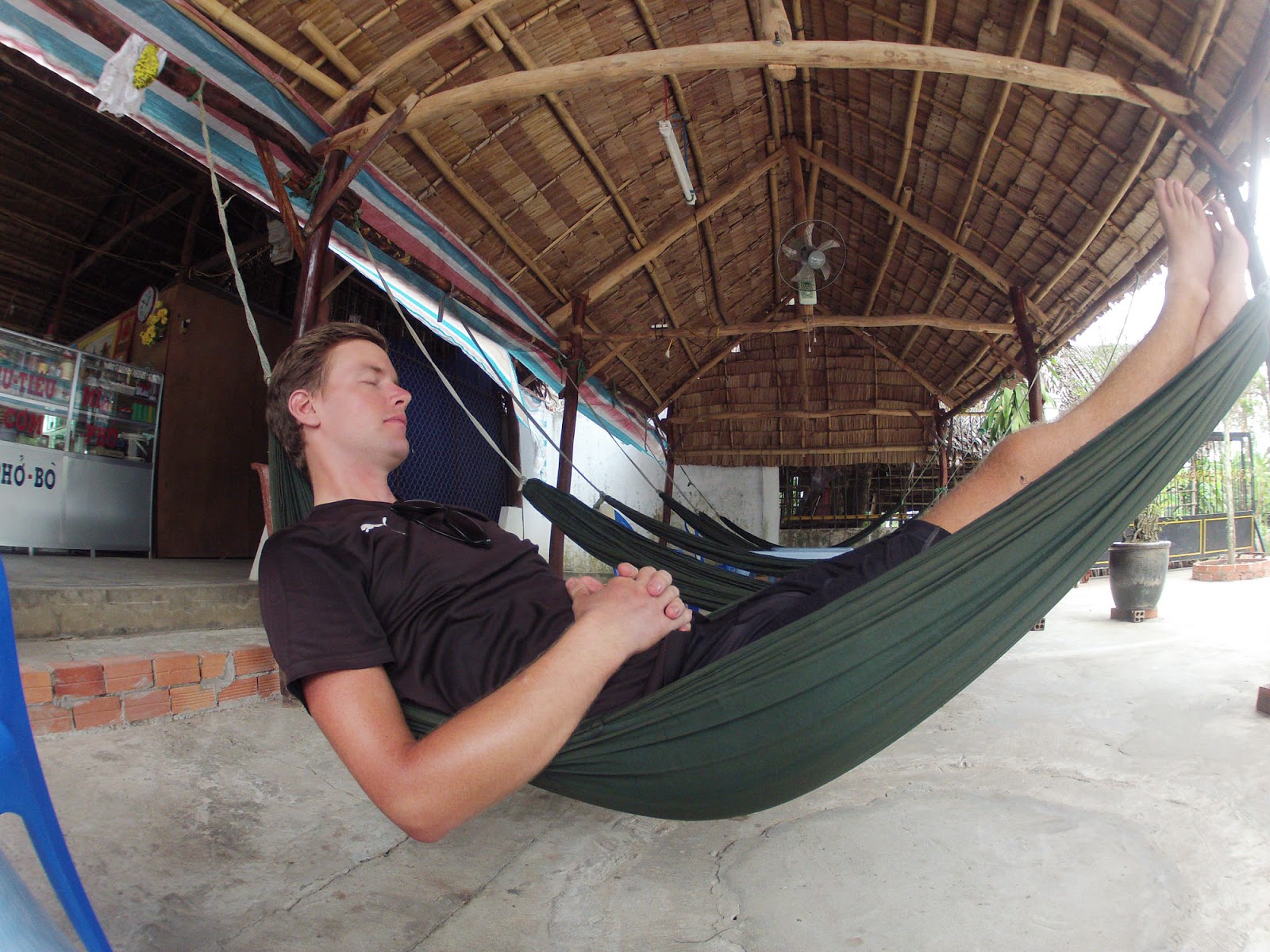 From the border it wasn’t very far to Ho Chi Minh City, and from what I’ve heard the traffic would be absolute crazy. I had cycled in Hanoi before and knew what to expect plus a little bit more traffic. And it was not easy, but somehow there’s some kind of system. I thing when you stand on the side and look at the traffic going by it looks completely mad, but when cycling there it works somehow but you always have to be prepared with your hands on the brakes and never hesitate. 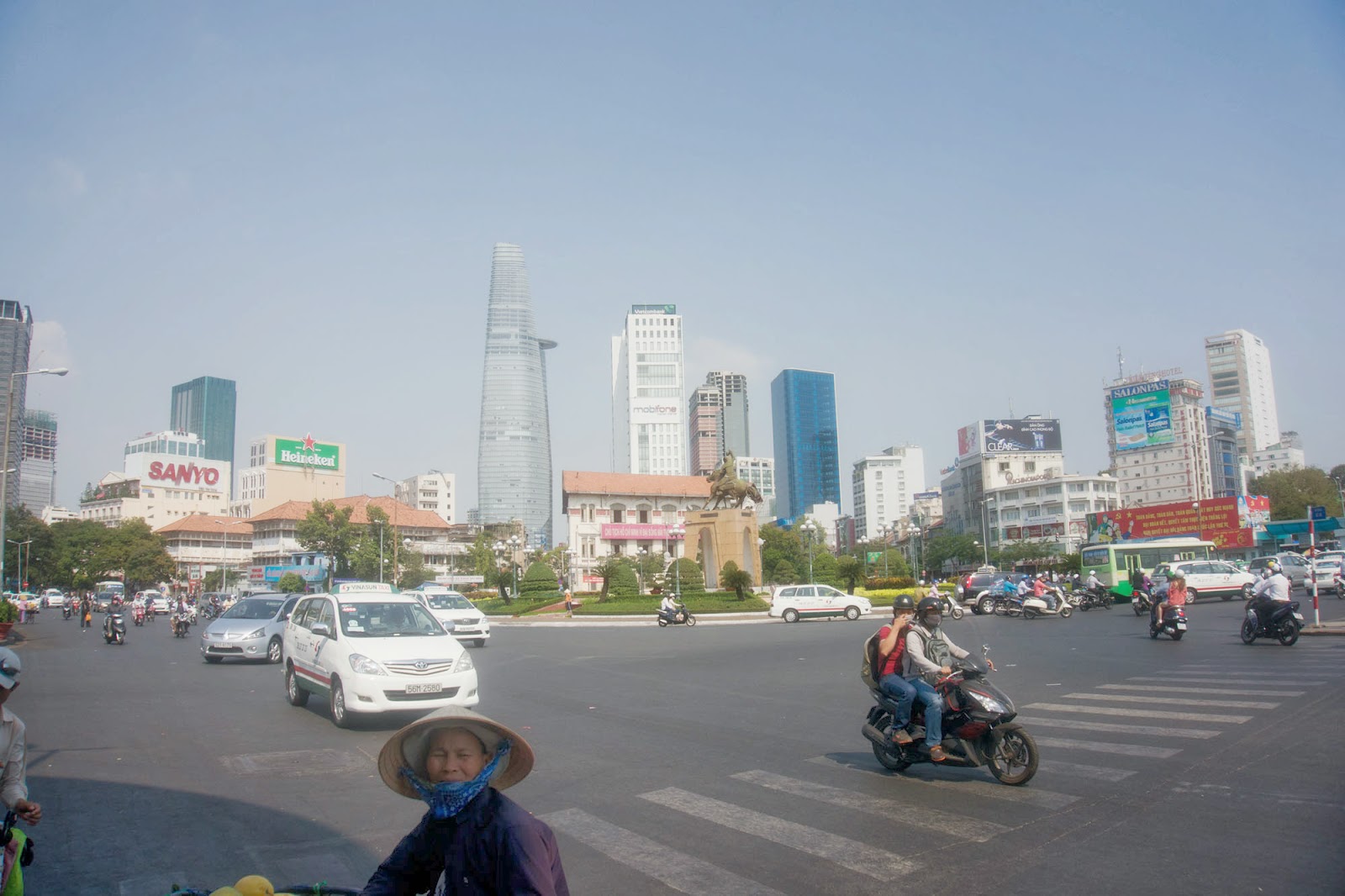 After many hostels and guesthouses I was now back to couchsurfing with a guy named Duzng. I really enjoyed all the hostels and meeting other travelers, but I need the variety and it was really nice to live with a local again. We had fun during my time in the big city, going around by bicycle by day and at the back of Duzng’s motorbike at night, seeing the city and trying some delicious food. We also met up with some other couchsurfer for some drinks and a little sightseeing around town. 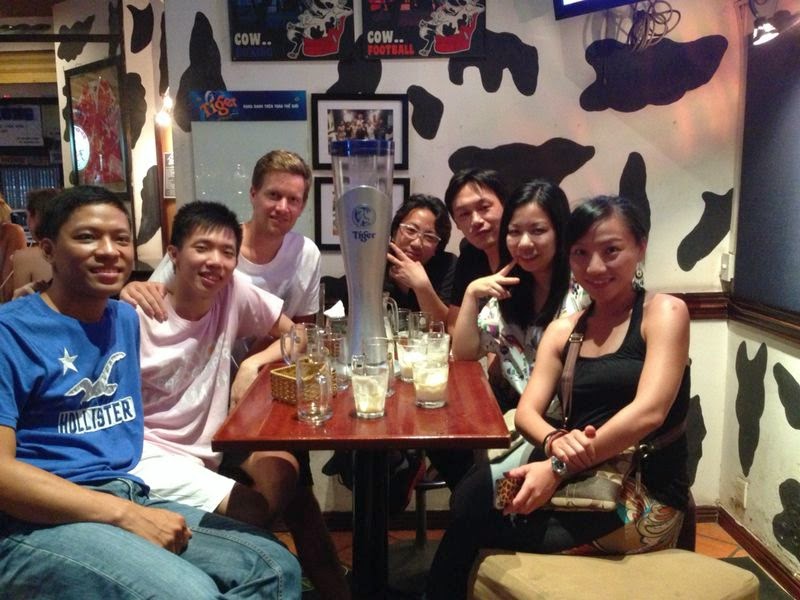 One thing I had to do while I was in  Ho Chi Minh was to go to the Thai embassy and apply for my visa. That process was quick and easy and I could collect my two months visa the next evening.
The bike ride out of the city was as crazy as on the way in and I always had my hands ready on the breaks all the time. But luckily I had no accidents and made it safe out.
I continued to My Tho, the first city in the Mekong Delta. Also there I had an invitation from a couchsrfer. But since my host was leaving for work in Ho Chi Minh the next morning and the fact that there wasn’t much to see there I instead continued on south. It was really nice to be cycling around the delta, through small villages, over many bridges and a couple of ferries. 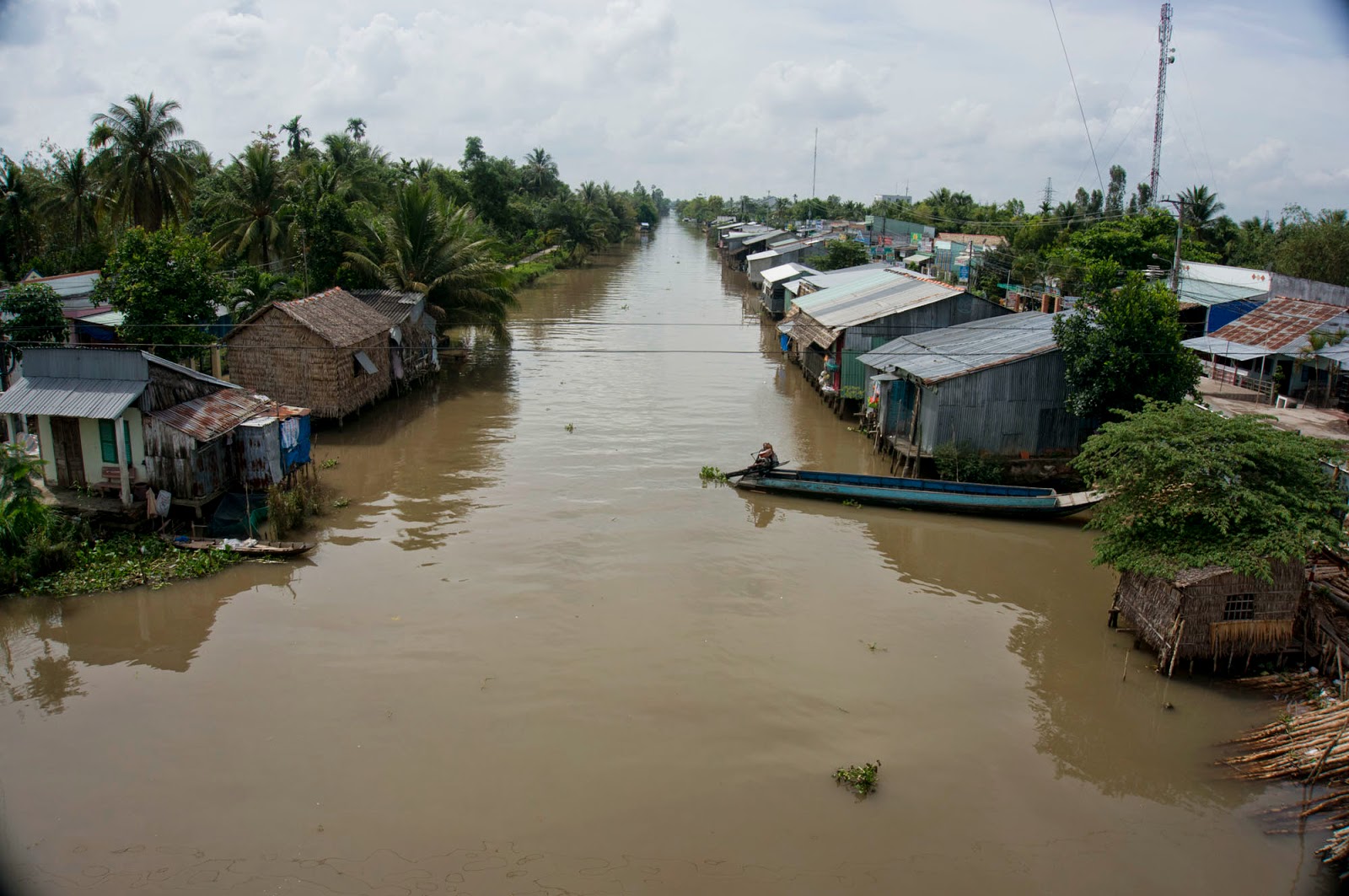 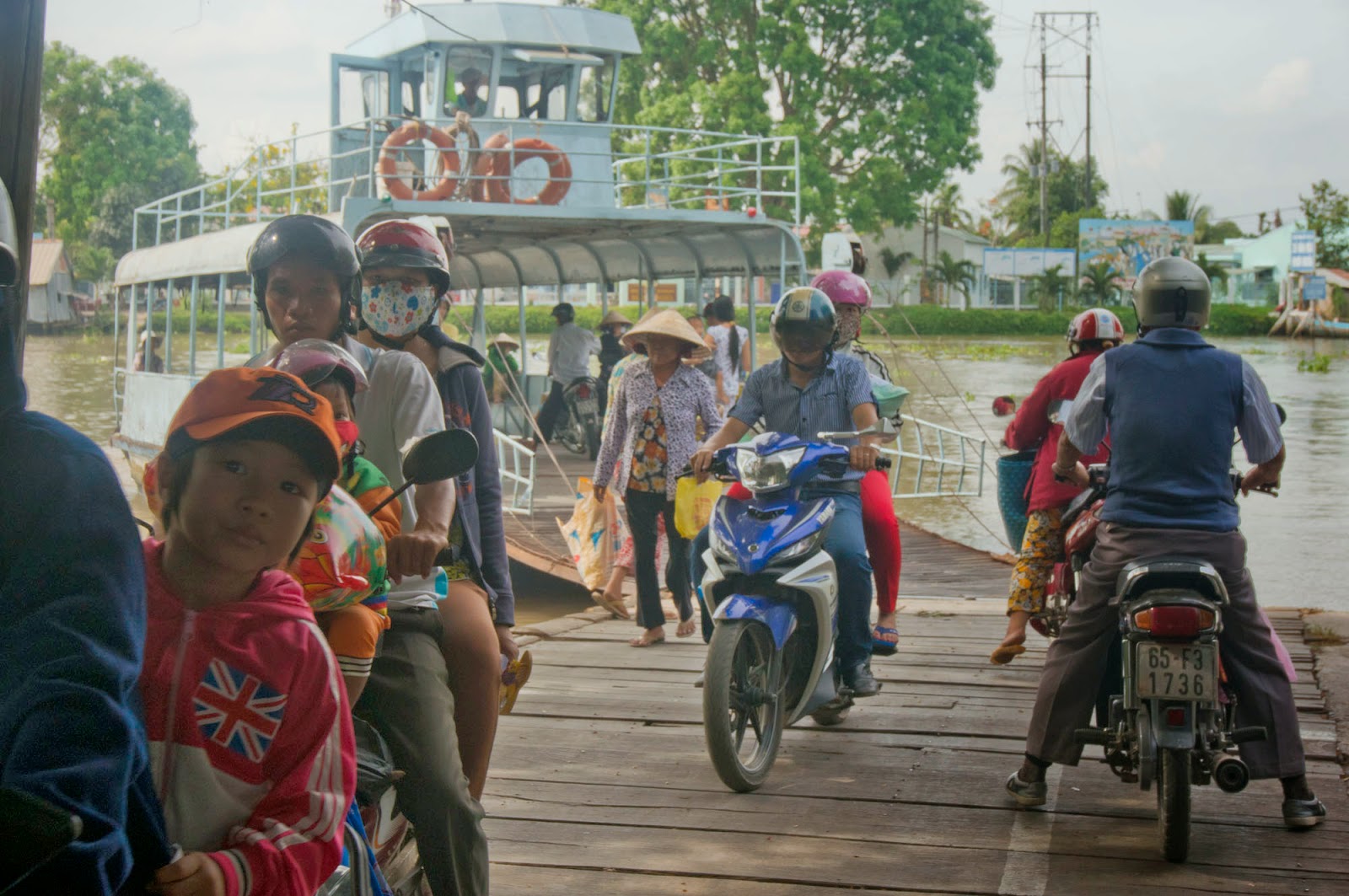 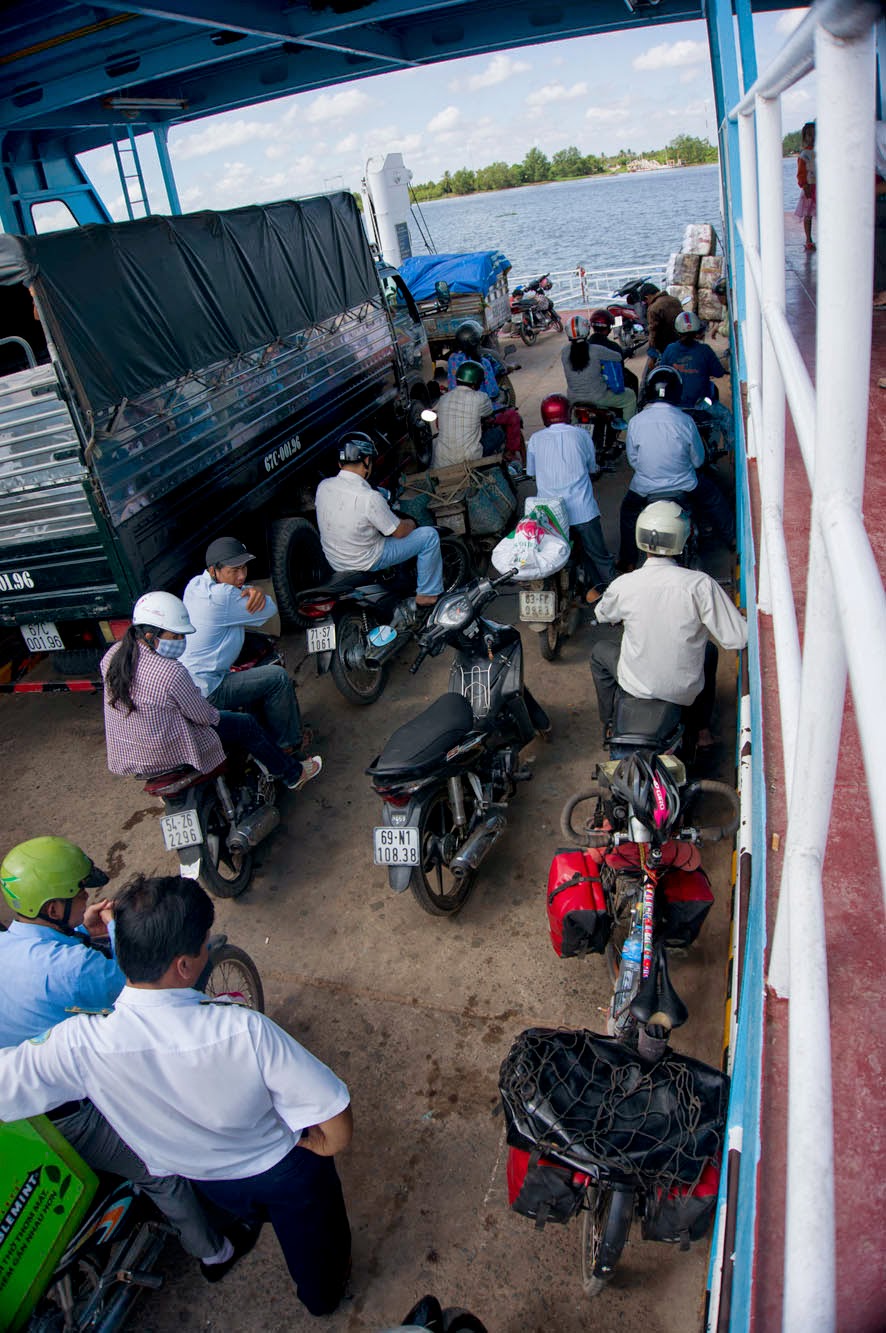 I reached Can Tho in the evening and met up with Tran from couchsurfing in the evening. She gave me some good advice on what to see around, but the main sight I already knew about. And that was the floating market on the river. There’s many floating markets around the delta, but this one was supposed to be the best. So I got up really early the next morning and went to the harbor to hire a boat to take me around the market. I was really interesting to see and something completely new for me. 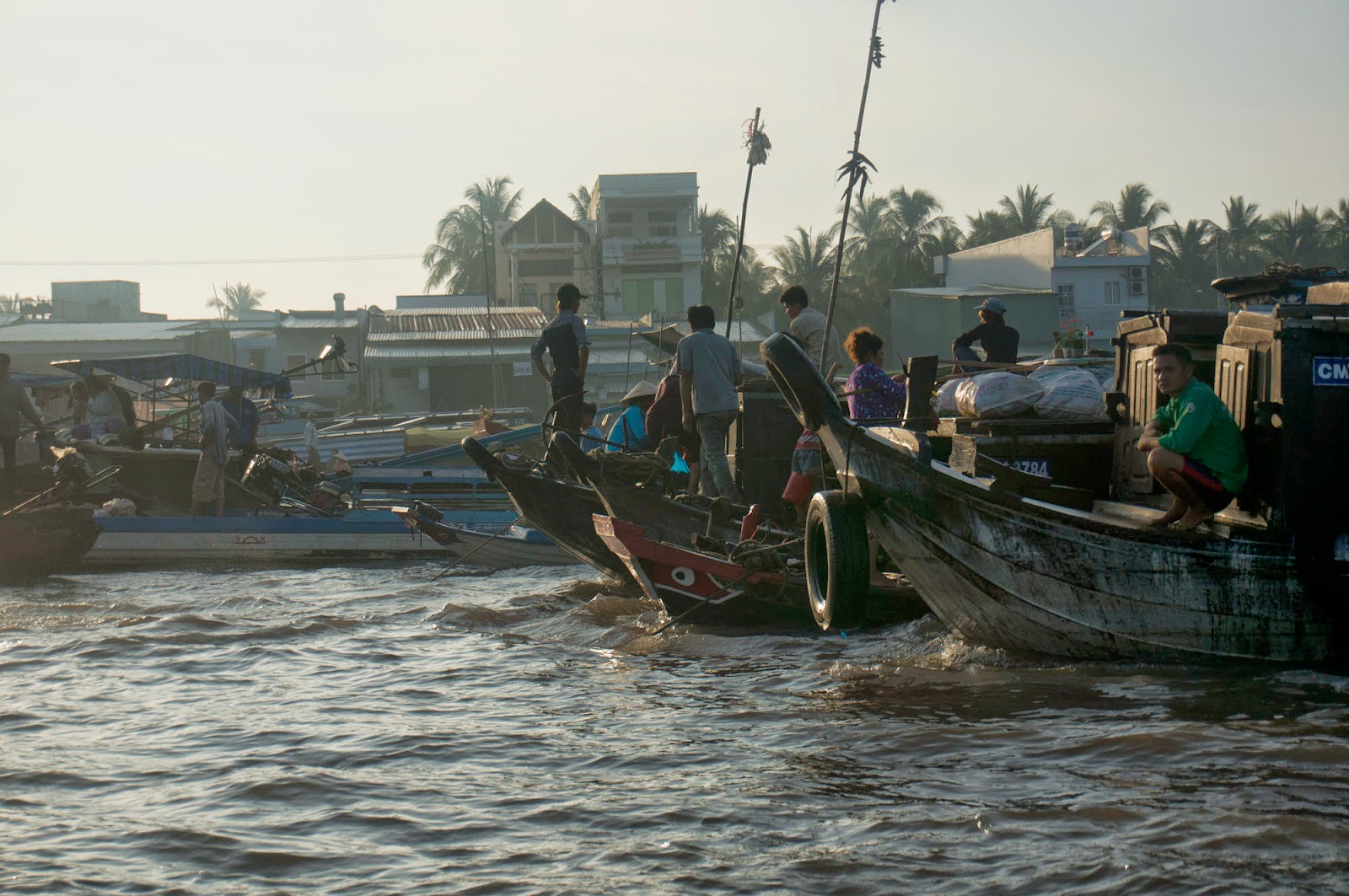 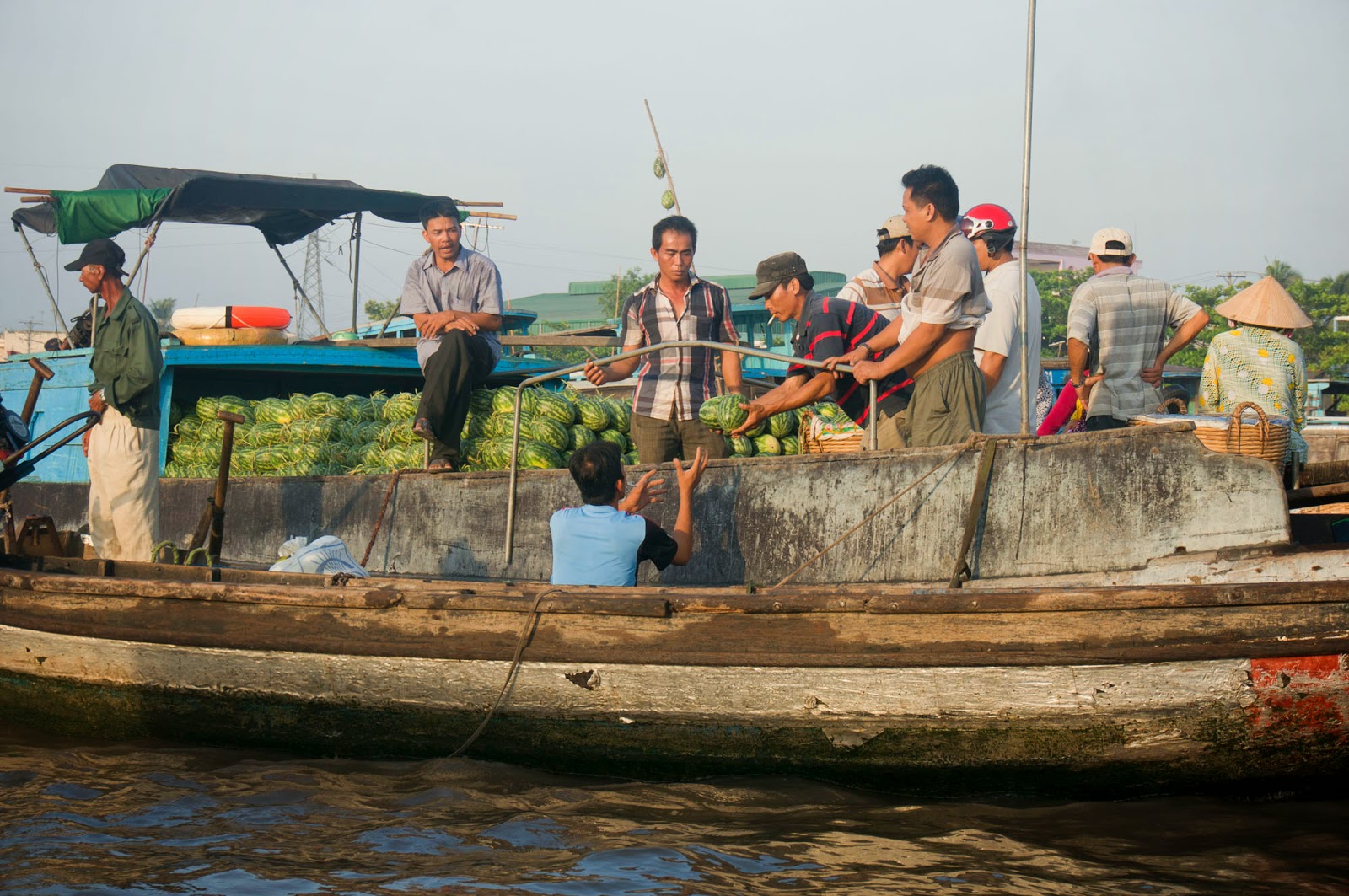 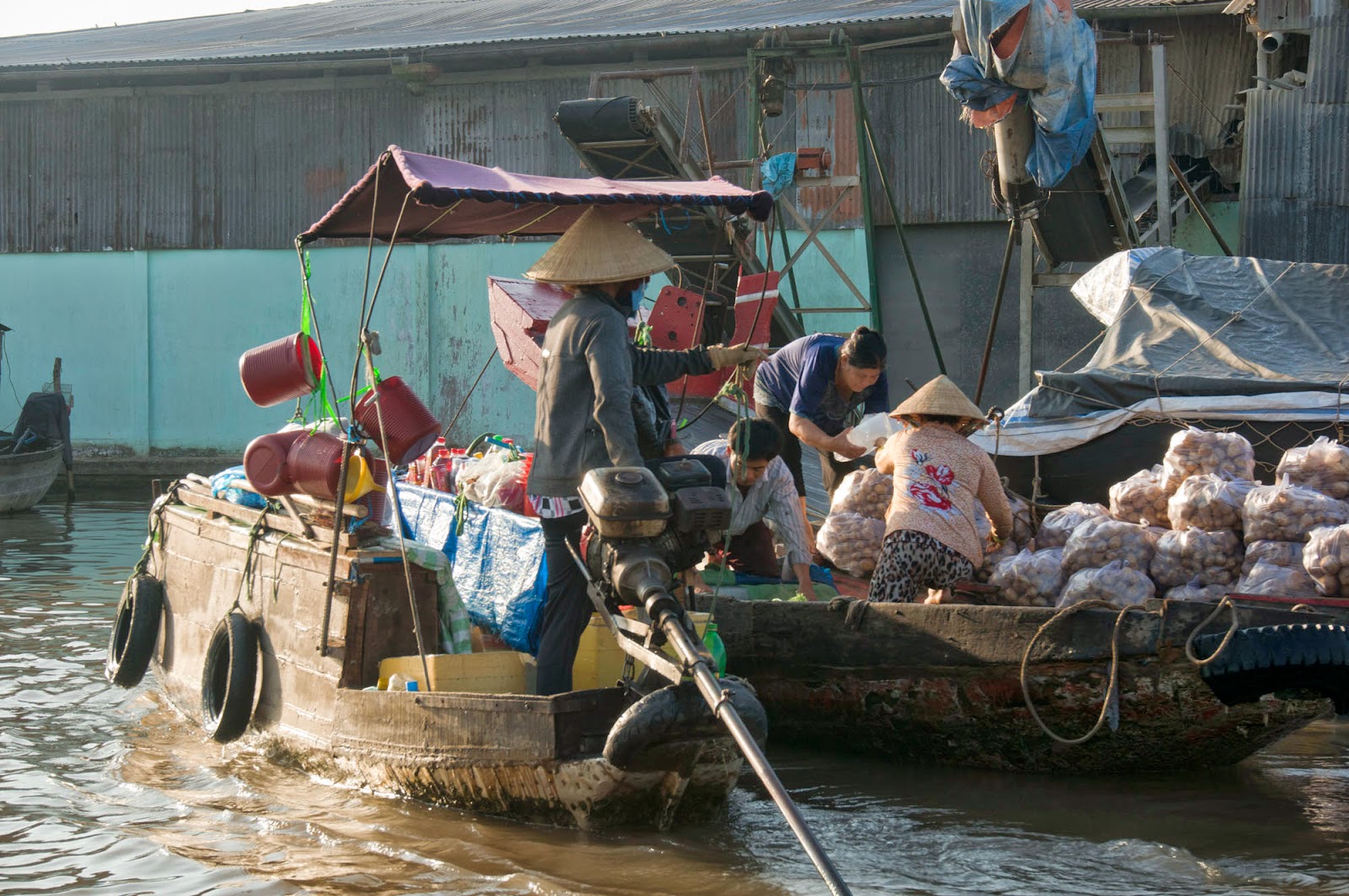 The market at the harbor 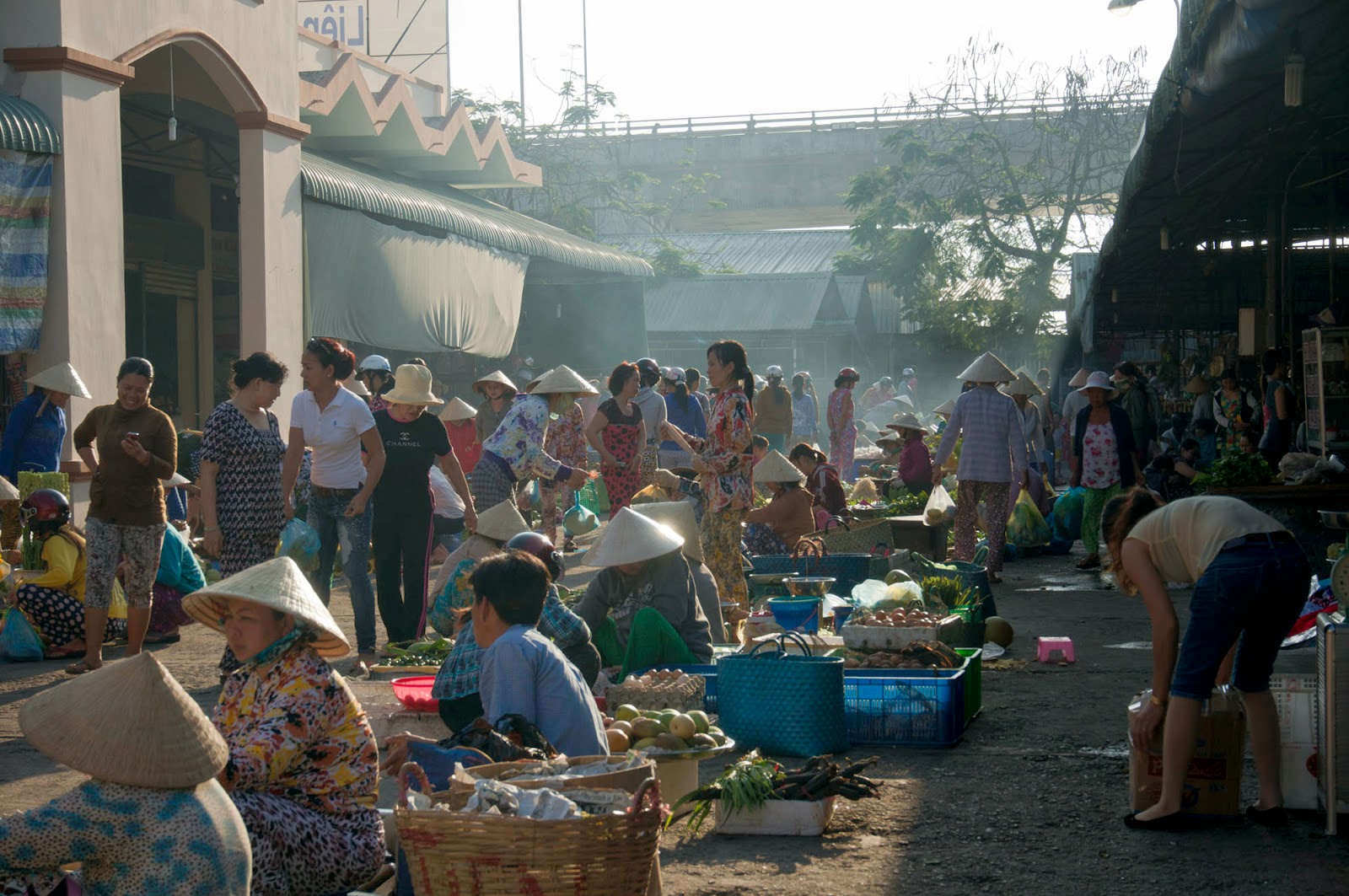 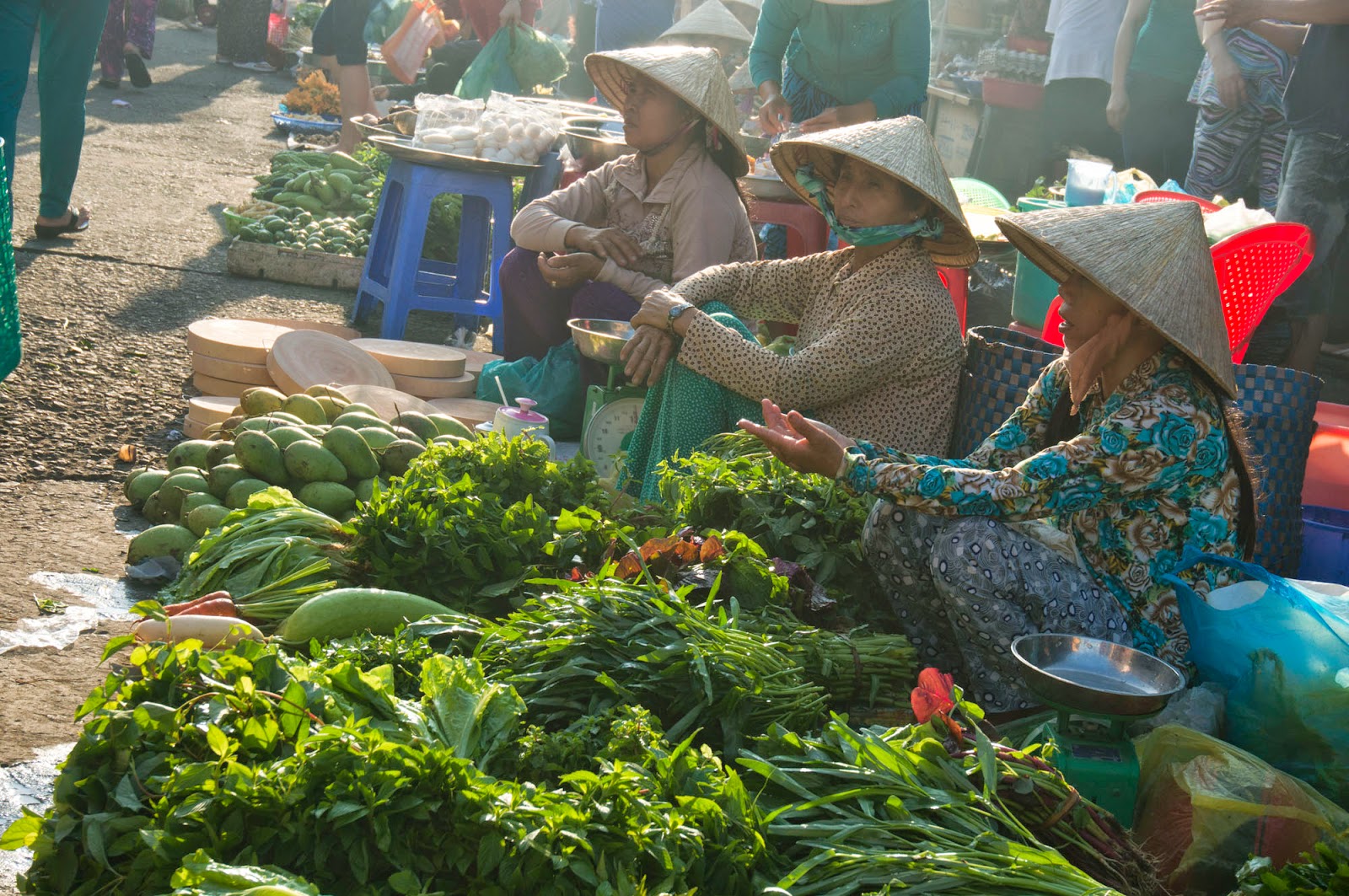 That night I also met up with another couchsurfer, and that was a little funny story. It turned out that I had met her while I was in Luang Prabang about two months ago, and she recognized me from my profile. Anh took me around on her motorbike and showed me the city, had some really good noodles and a special desert only found in that city. It was some sort of jelly with milk and of course ice, everything here is served with ice..
The next morning I continued on south and had a really nice ride on small roads next to the canals with small boats driving next to me. The next stop was Rach Gia, and for the first time in a long while I was back by the ocean. It fest great and something I had been looking forward to a lot. 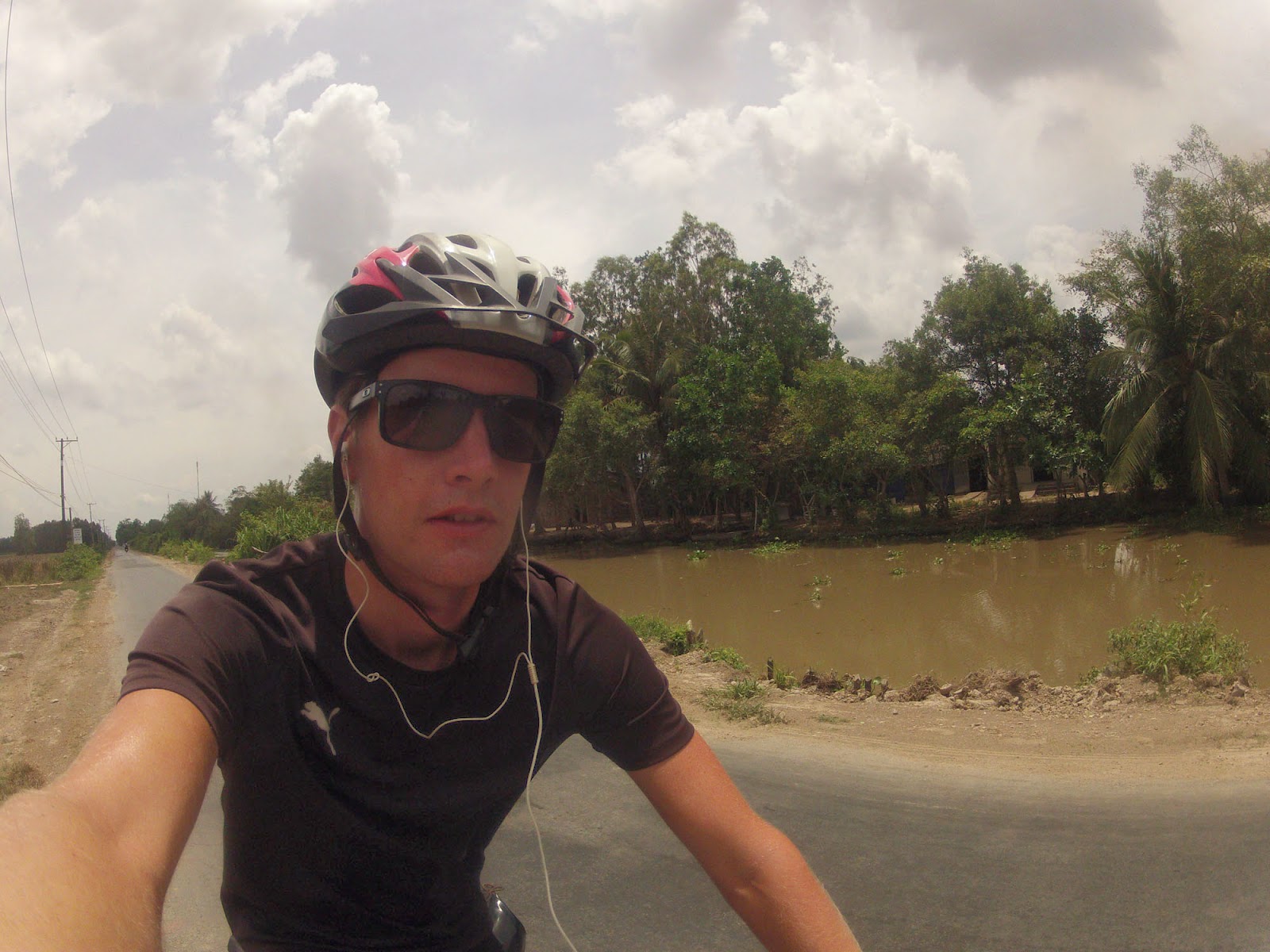 On the way into the city a man on a motorbike pulled up next to me and starting talking. I was really difficult to understand anything since his English wasn’t good and also while riding. So we stopped to have a chat and I finally understood that he wanted to invite me to his home. I went along with that and we had a couple of beers and tried to understand each other. In the evening he took me around town on his motorbike to the seaside and in the city. He invited me for dinner and his brother and I later went for another trip to the sea side and had a chat at a café. Hien couldn’t host me since his house was really small and he had wife and two kids. But he helped me to find a room for the night right next door for only 3 dollars. 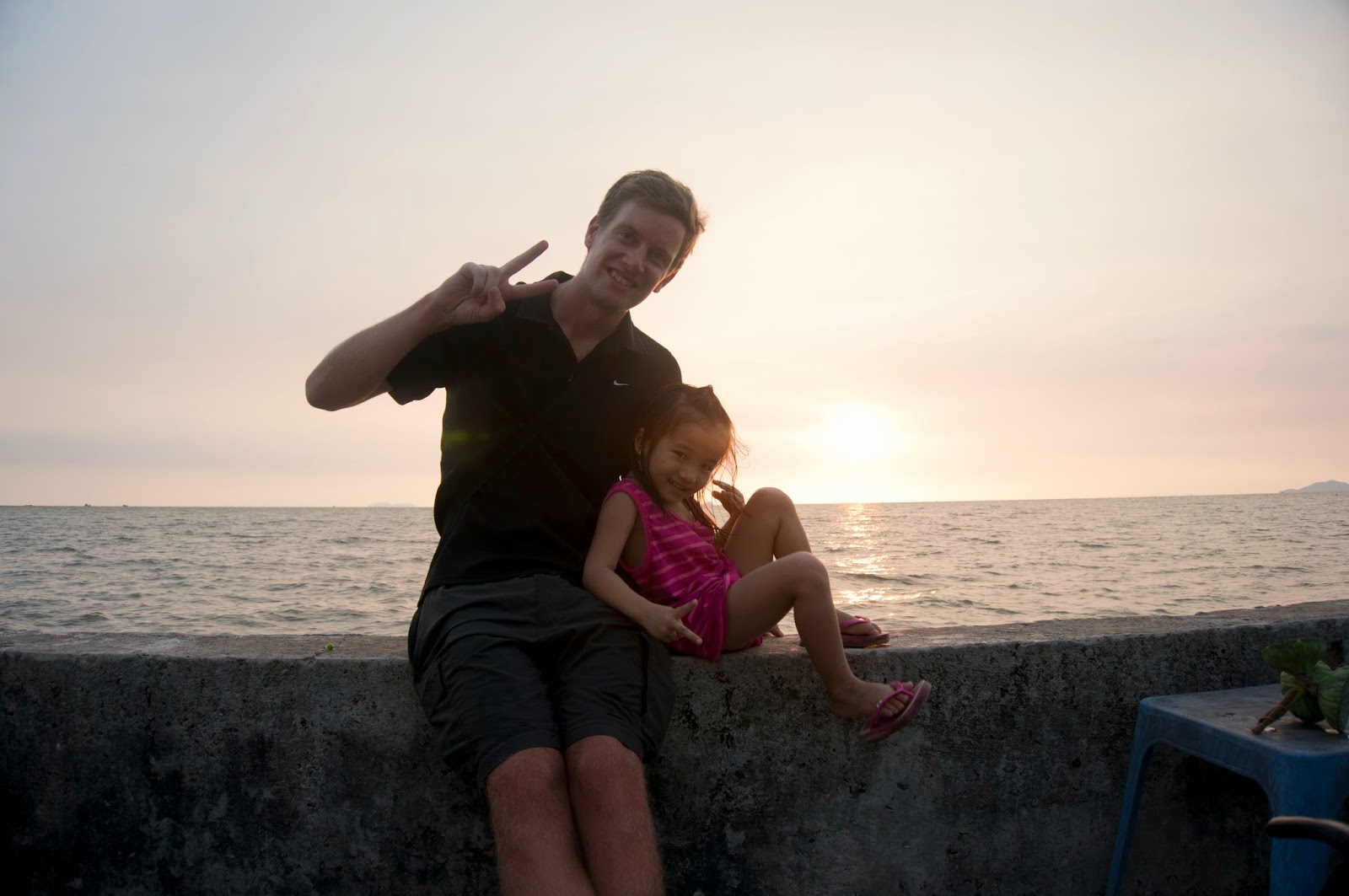 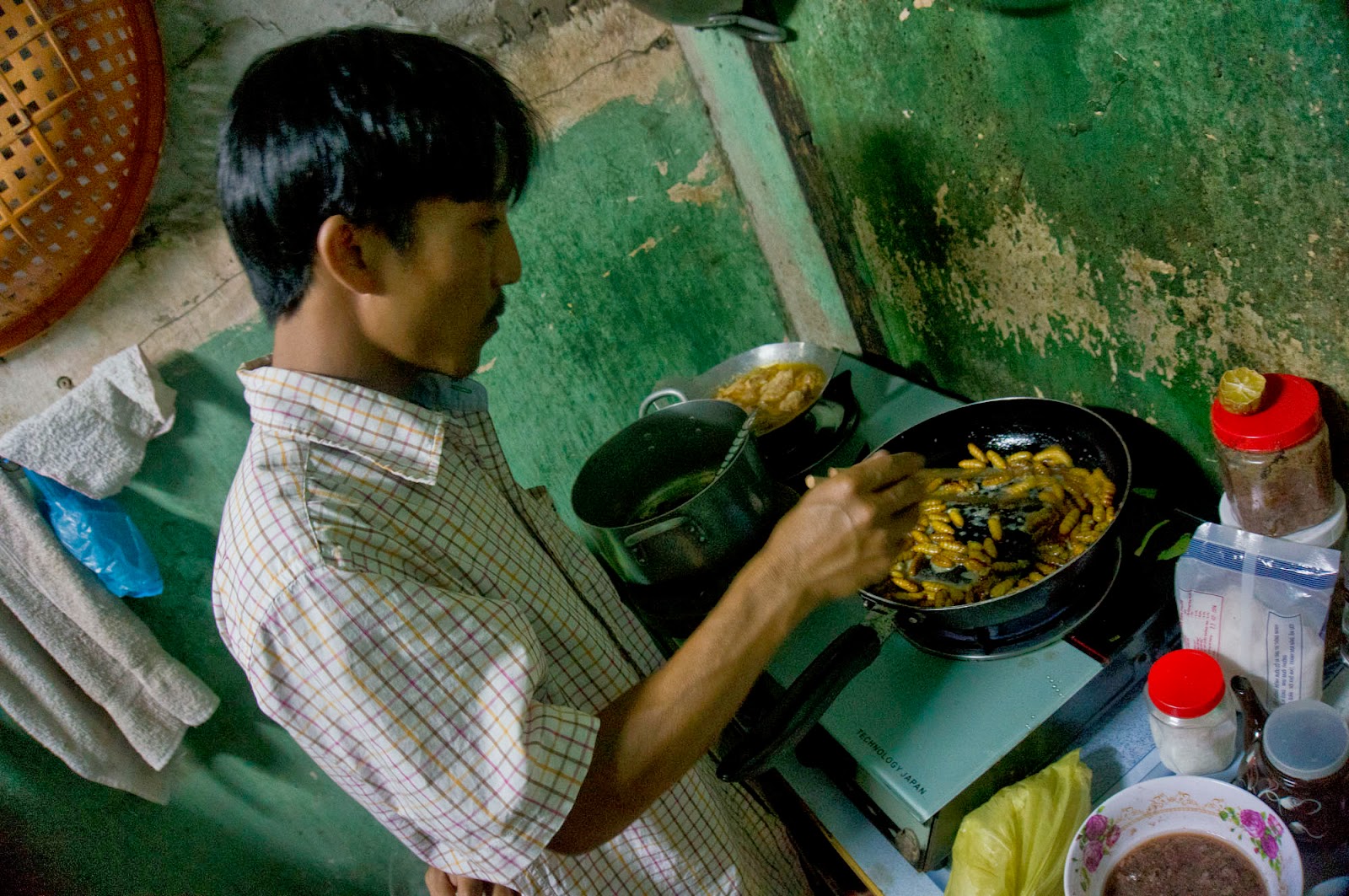 Today I followed the coast to Ha Tien and it was a really hot day today, it must have reached 40 degrees. I though being close to the sea would give a little cooler breeze but today the breeze was hot. I managed the 90 km in good time since I had started early in the morning and had time to look around the town for a cheap place. Ha Tien is a small town but still have a lot of guesthouses, but after a while I met a guy that could get me a room for 5 dollars. And with a complimentary beer included =)


So again I’m updating the blog just as I’m about to cross another border. In the morning I have a short ride to the Cambodian border and from there not very far to the little town of Kep. I’ve really enjoyed the time here in Vietnam but also looking forward to be back in Cambodia.
Upplagd av Samuel Eriksson kl. 04:29