After 12 days in Siem Reap it was time to get back out on the open road. And after almost 2 weeks break the legs are always a little slow to start with. But very soon I’m back into it and heading for the capital Phnom Penh. I had met other cyclist telling me that this road was really bad at some parts, so I was ready for that. The heat continues, so staring a little earlier in the morning is always nice to get a few hours when the sun isn’t burning as much. It was not only the heat and the tired legs that was hard when leaving Siem Reap. It was also a day of reflecting over the time I had there and a special someone that I’ll miss very much..
But the show must go on, and I pushed on 100 km into the wind the first day reaching the small town of Stoung and found a little Guesthouse. And once you get out of the touristy Siem Reap the prices are back to normal Cambodian and you can get a private room for 5 Dollars and a pretty good dinner with rice and meat for 1 Dollar. 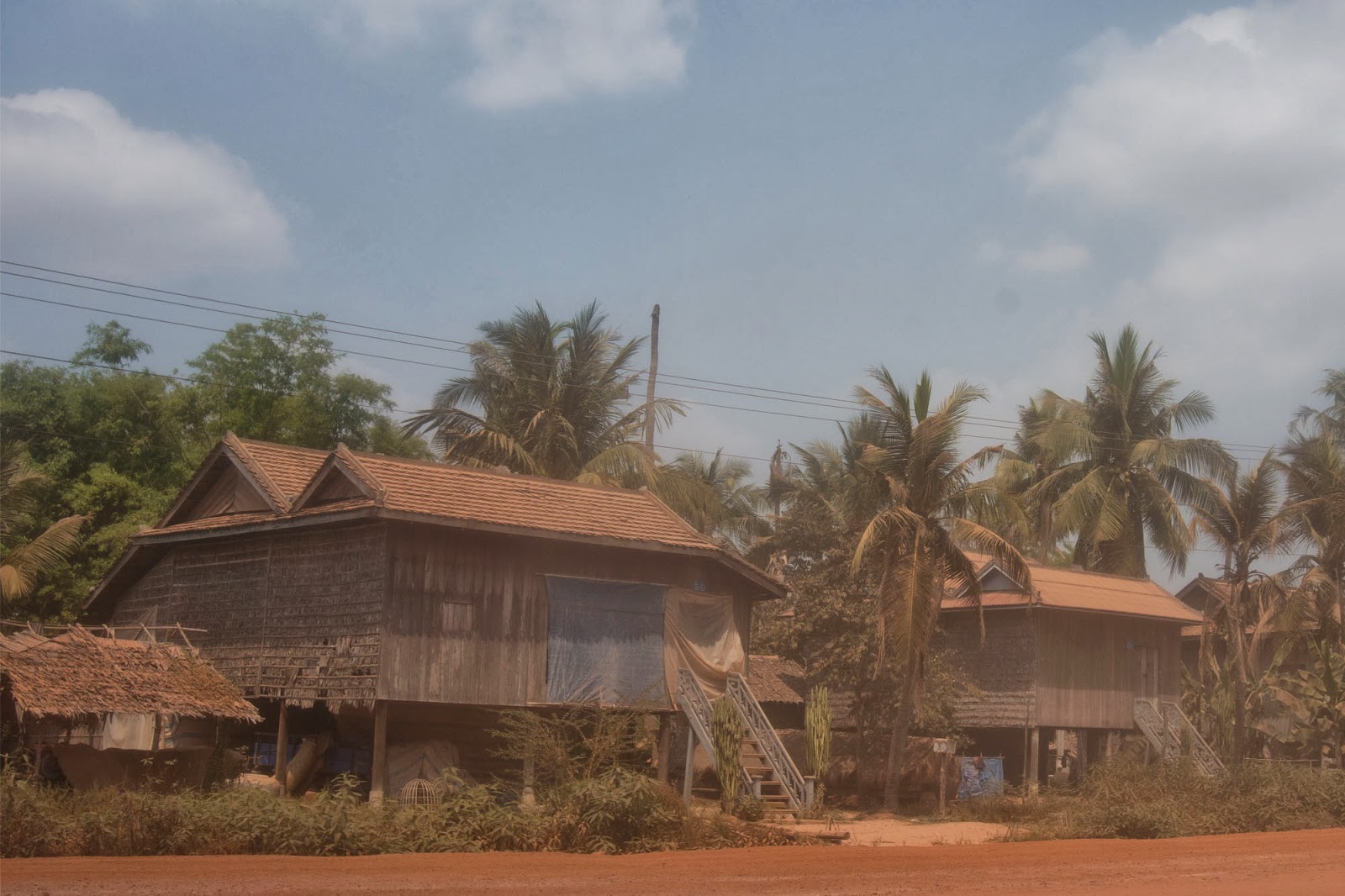 On my way from Siem Reap I guy pulled up next to me with his motorbike and started talking. His name was Vutha and was really nice and curious about my trip. He rode next to me for about half an hour and we had a really nice conversation about my trip, life in Cambodia and other things. After a break with something to drink we said goodbye and I continued on to the next small town and another little guesthouse. 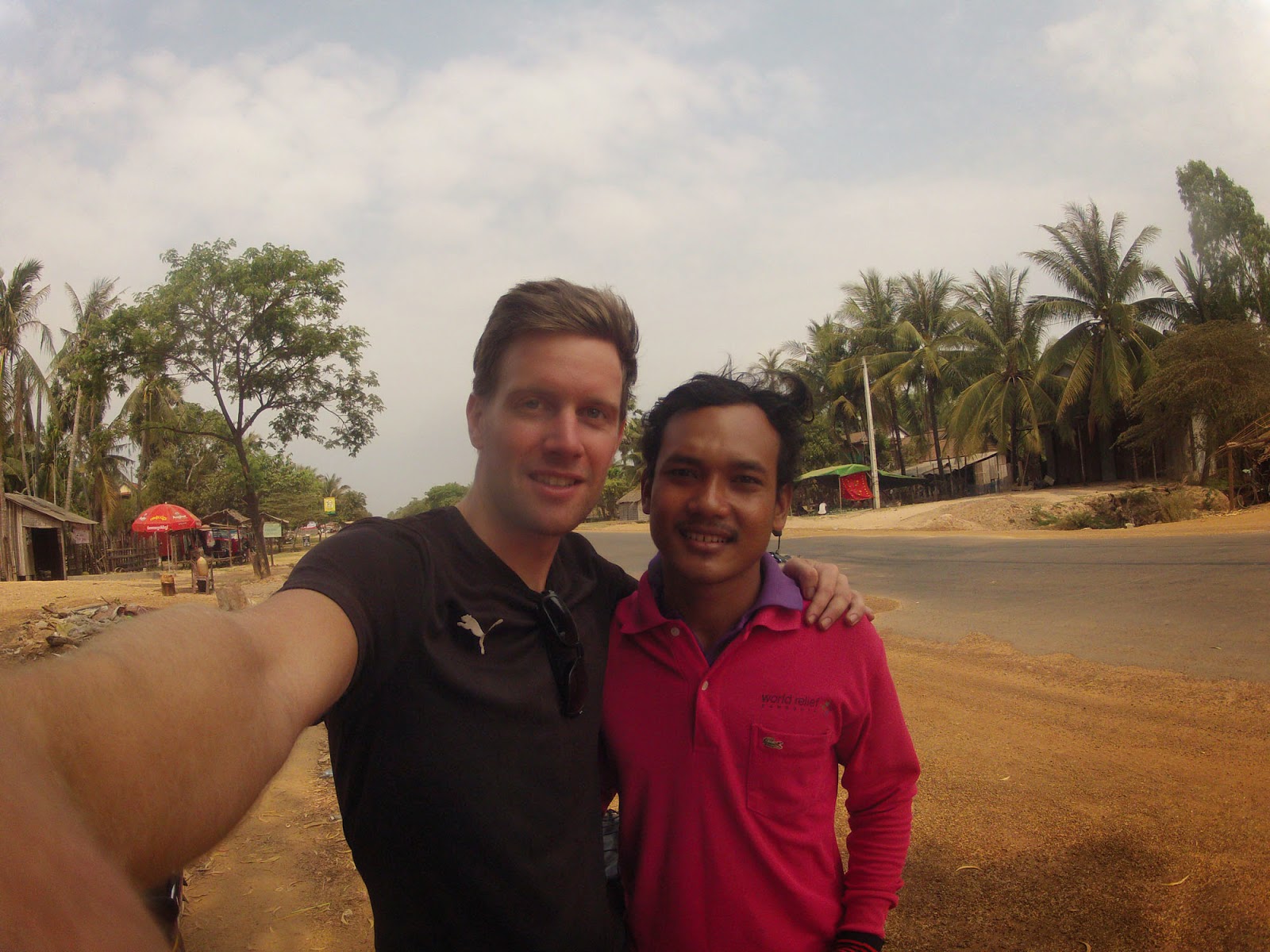 It took me 4 days to get to Phnom Penh. I could probably have done it in 3, but didn’t feel like I had to push on since I had plenty of time. And the road was not built for speed at all. So one day I just rode 50 km and had a good rest before the last day of riding into the Capital. And I really needed the strength for that day because that part of the road was really bad and the dustiest road I have ever been on. For about 60 km it was just dirt road with a layer of sand that covered my face and body at the end of the day. 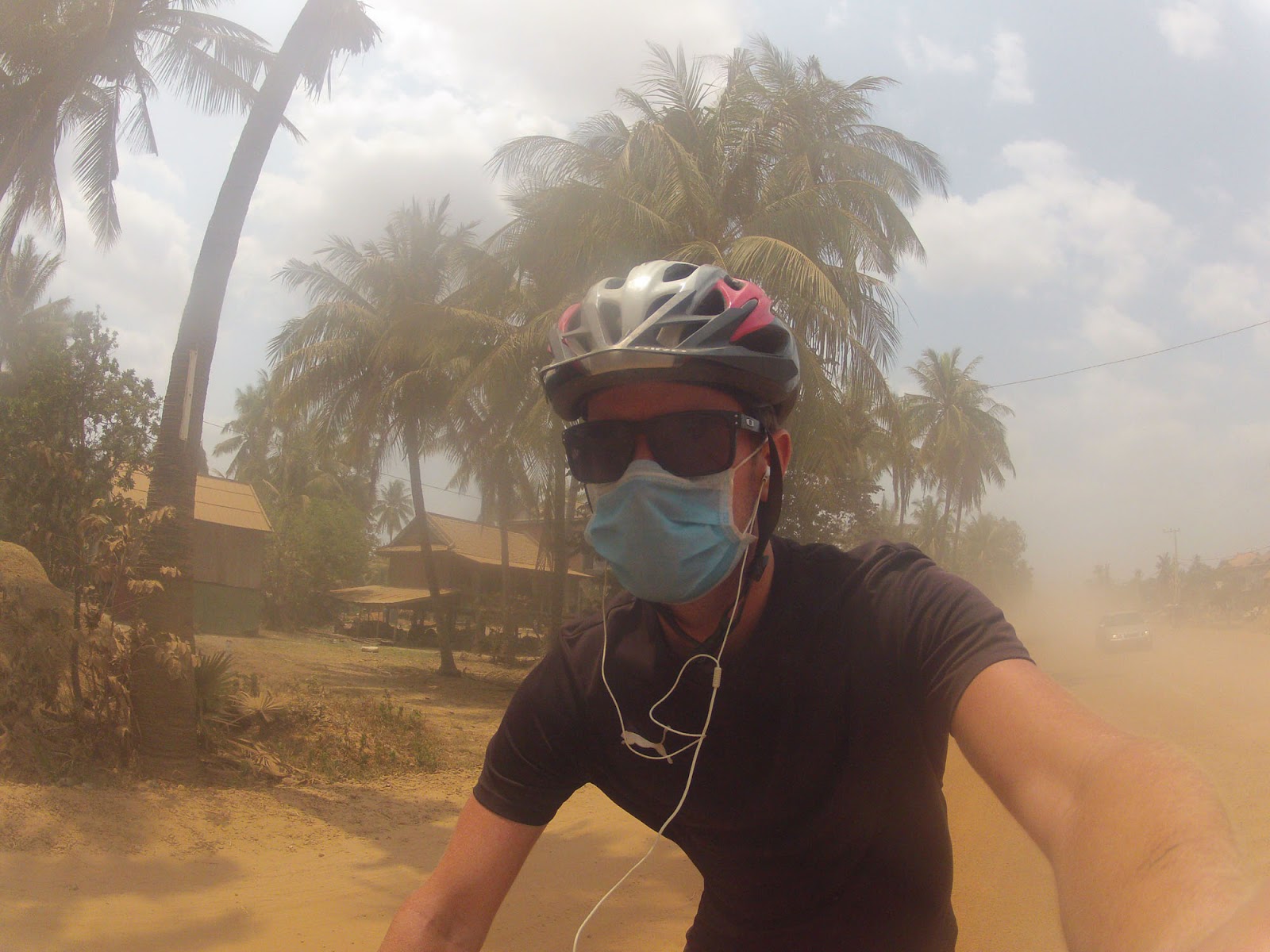 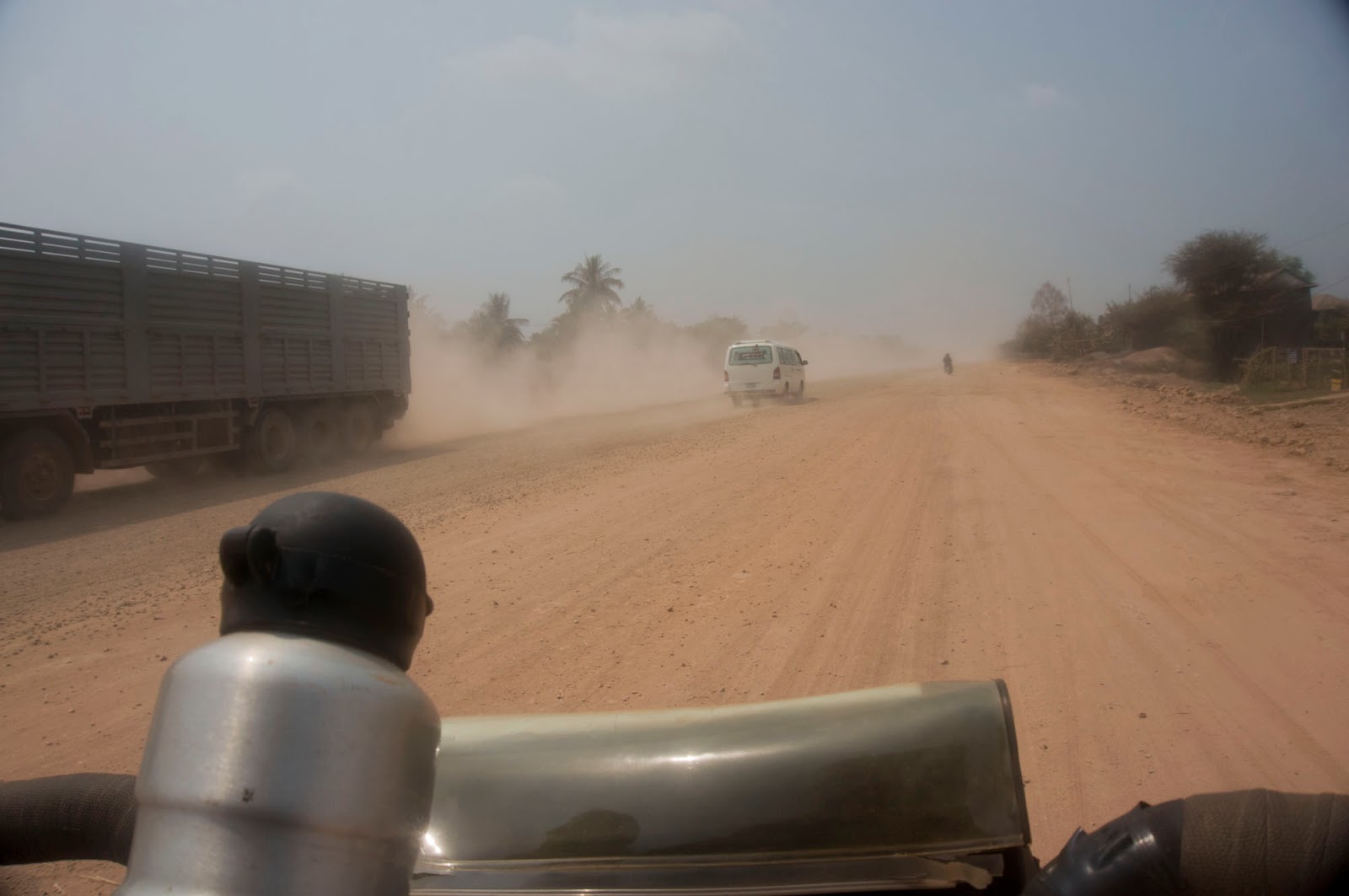 I got laughed at by the people at the little road side restaurant when I pulled over all covered in dust. So it was really nice do wash off and have a nice really good lunch for just 50 cents. I bumped into two other cyclists after lunch and we rode the last stretch into the city together. I couldn’t see how dirty my own face was, but judging by how they looked I could just imagine what I looked like. Lucy and Kevin was a couple from Scotland who also was on a long trip being away for about one year so far. 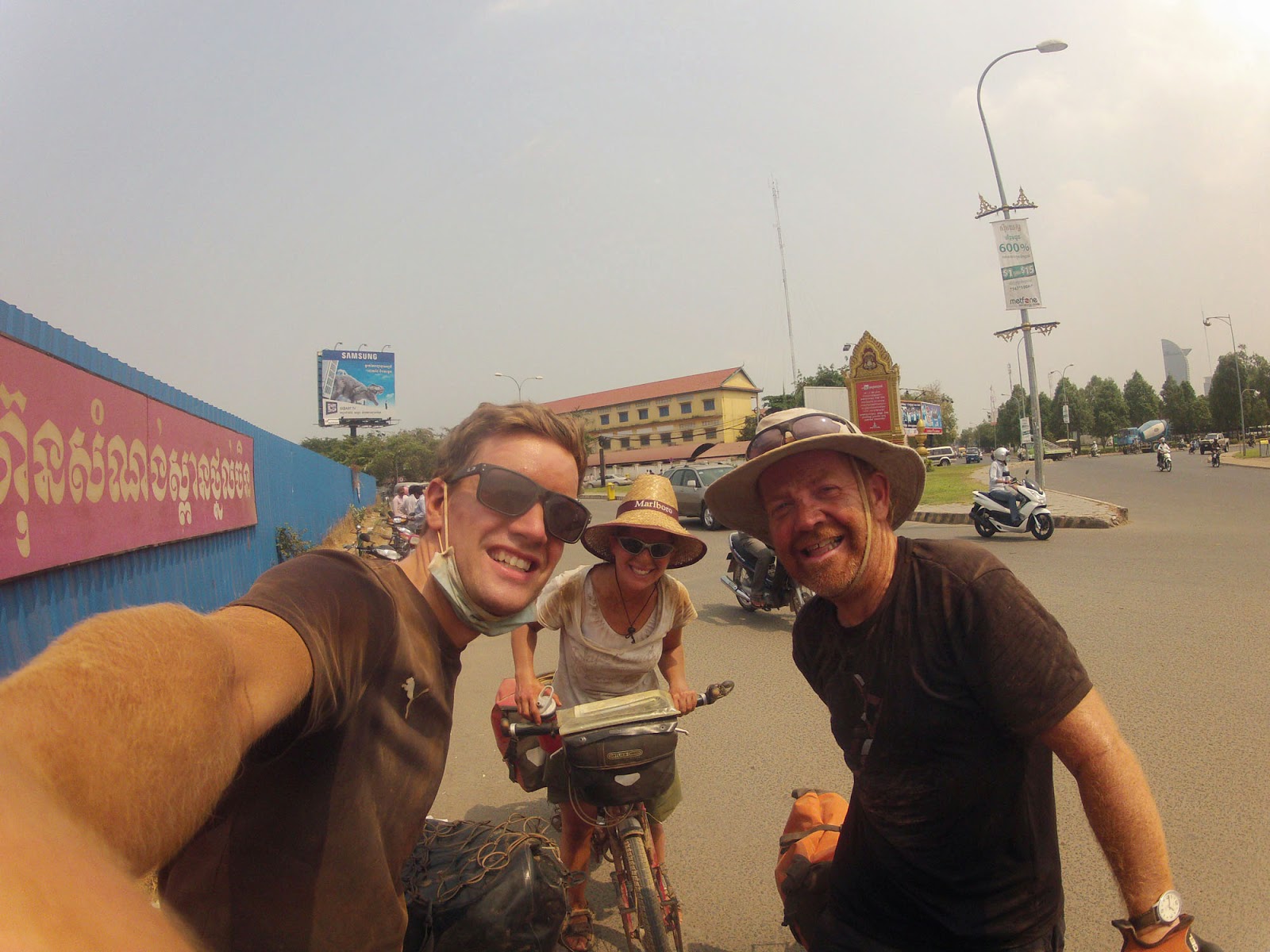 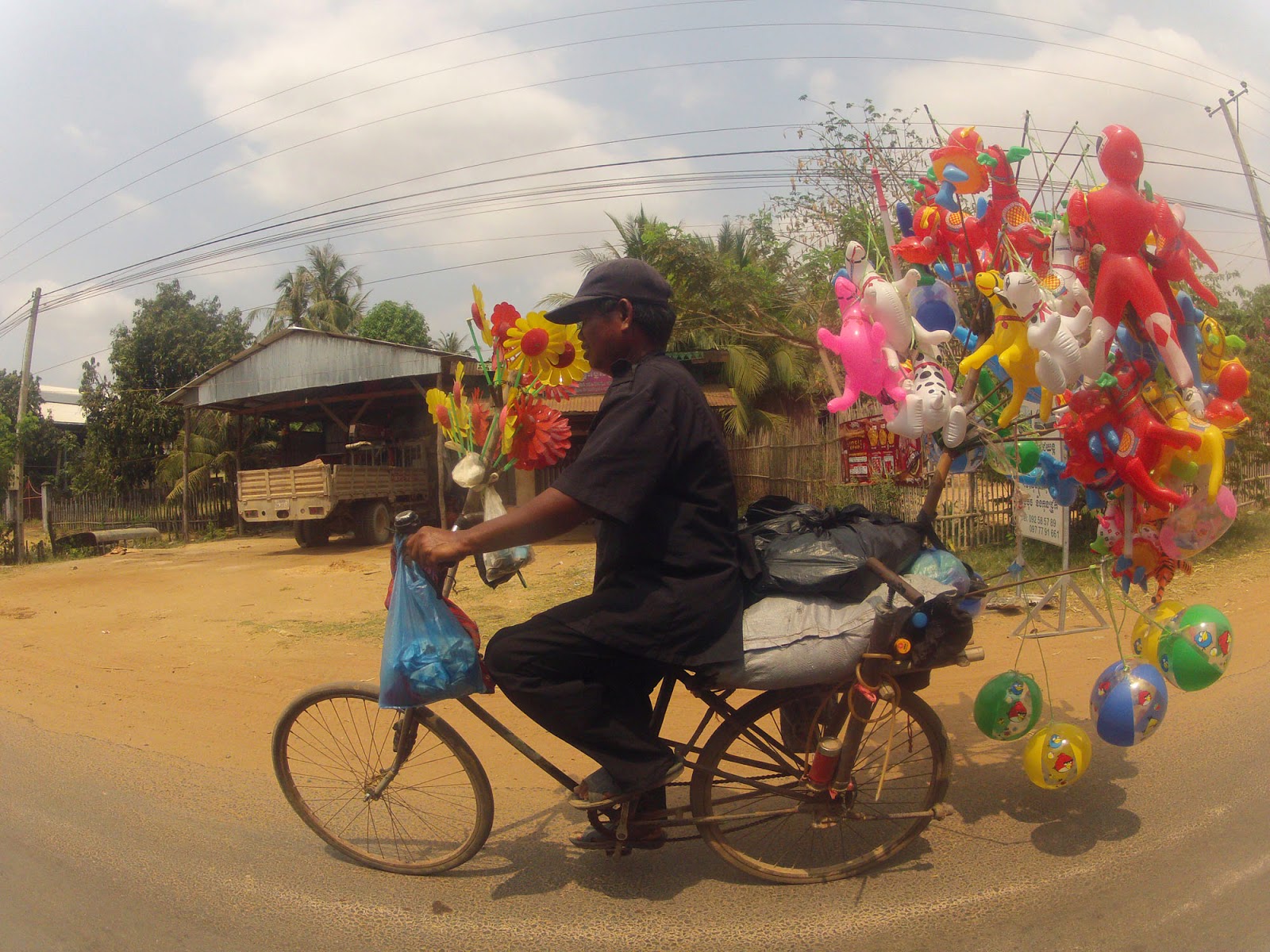 I was really nice to get to the hostel in Phnom Penh that surprisingly was only 2 Dollars for a really nice air-conditioned dorm. And the shower after a day of cycling through a cloud of dust was amazing. Arriving in the Capital was a little strange because it doesn’t feel at all lie the rest of Cambodia. High-rise buildings and a buzzing big city feel to it. And the traffic… WOW! No time to relax.
I stayed here four nights and meet some really nice people and had a good time. I meet up with my cycling friends from Scotland one night and it was really nice to share stories from our trips. And since all of us had been cycling in Iran we ended up talking a lot about how great it was and wishing we were back there again. I also met another cyclist from France just when walking around the city and shared some stories. Unfortunately none of them where going the same way as I am so we couldn’t ride together from here.
One thing I wanted to see while being here in Phnom Penh was the “Killing Fields”. So yesterday was a somber one but also very important to know about the history of the country and all the horrific things that went on here under the Khmer Rouge. I first visited the S-21 prison where people was tortured in ways to horrible to imagine and then brought out to Choeung Ek also called the “Killing Fields” to be executed. But since bullets where to expensive they were just beaten to death with all types of weapons. Choeung Ek is just one of many mass graves all around Cambodia at the time where about 3 million people died under the rule of the Khmer Rouge. 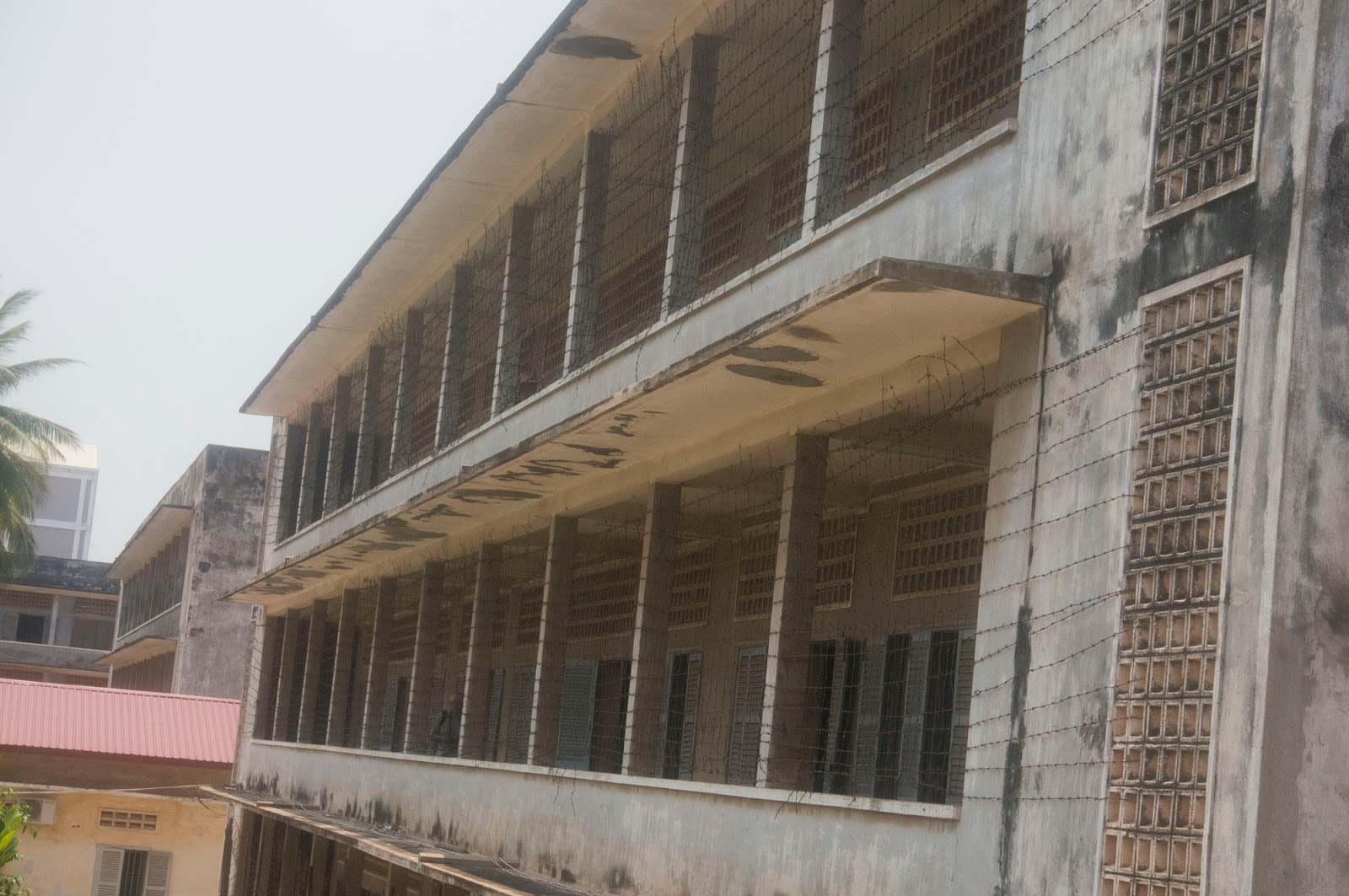 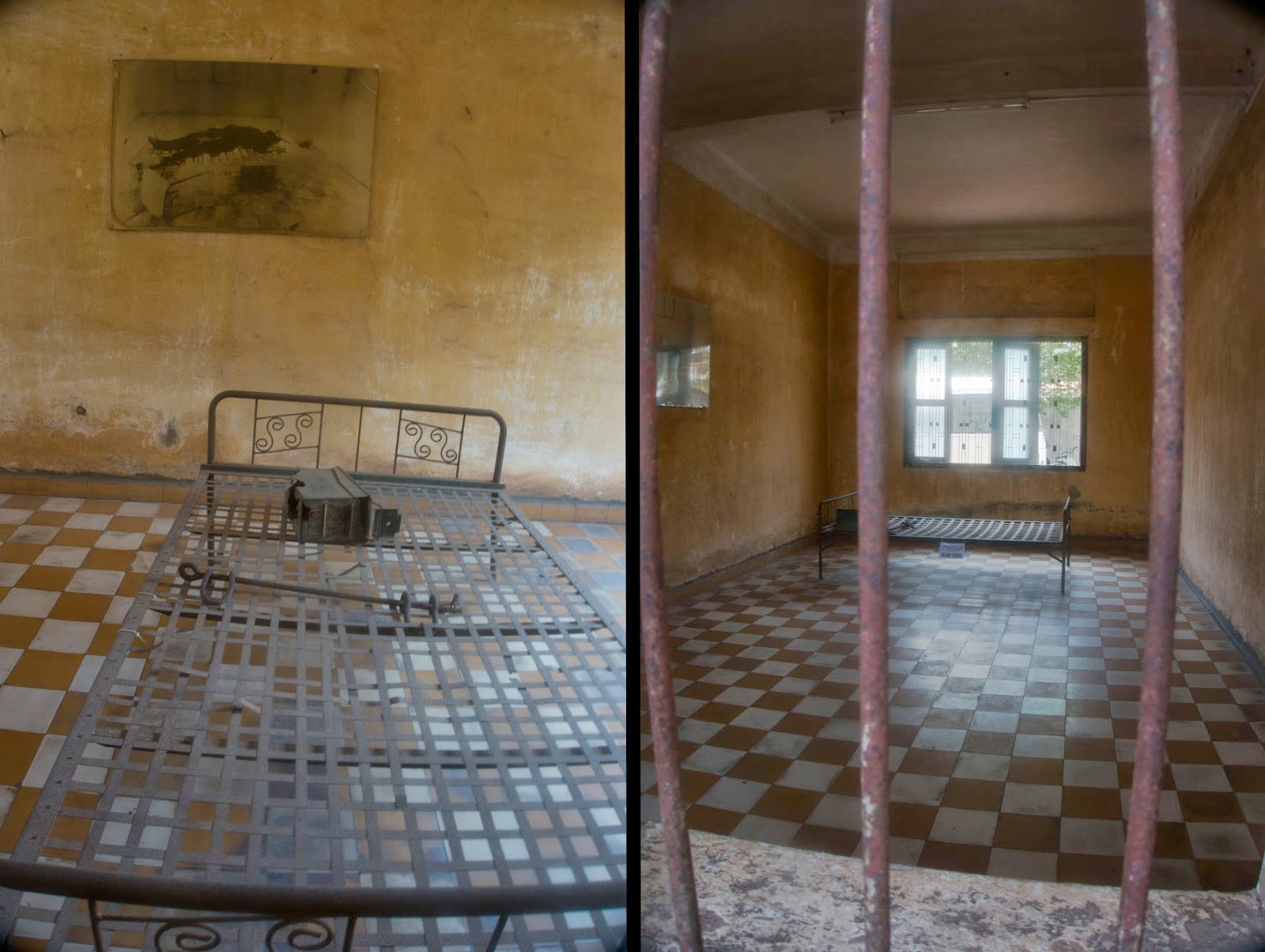 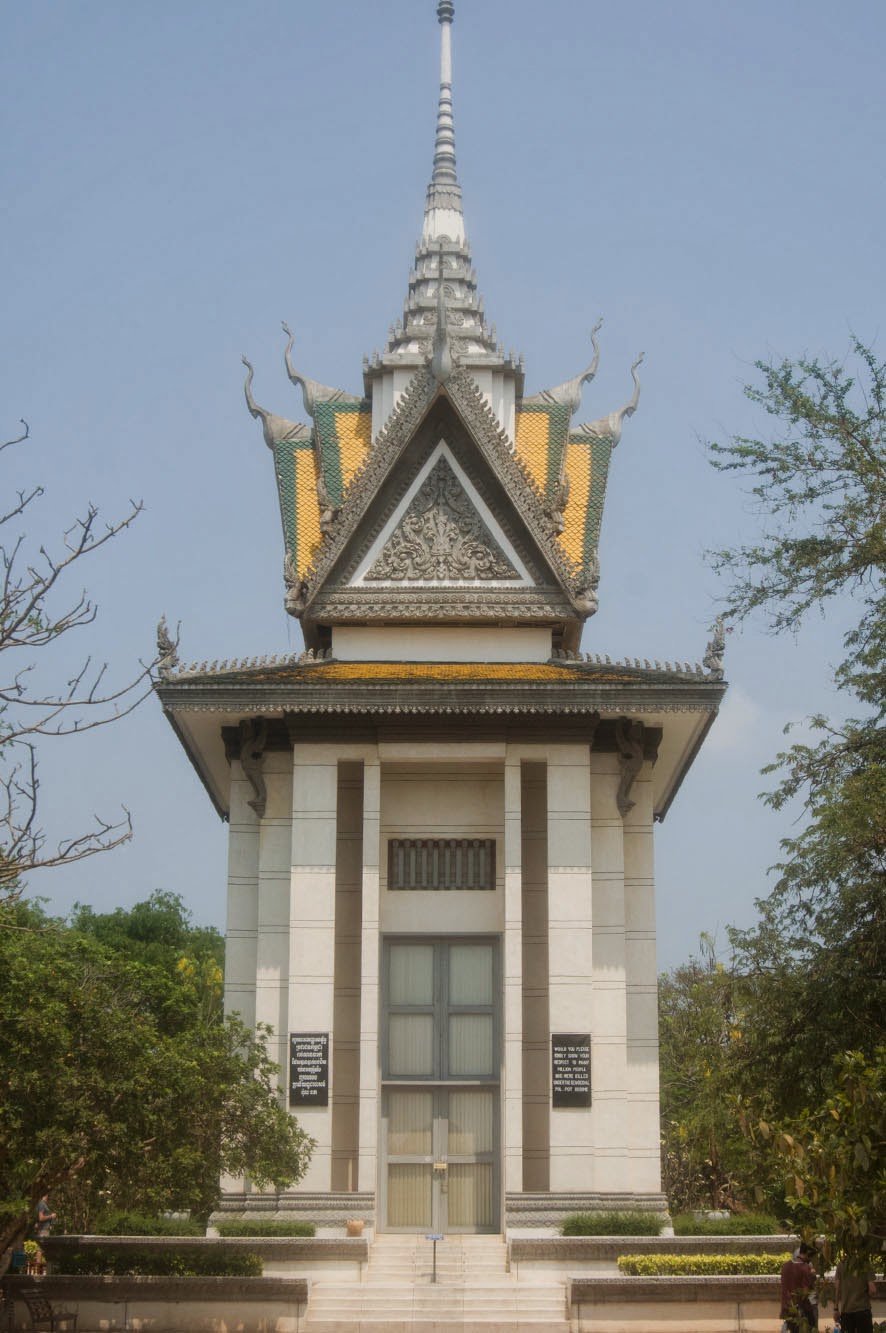 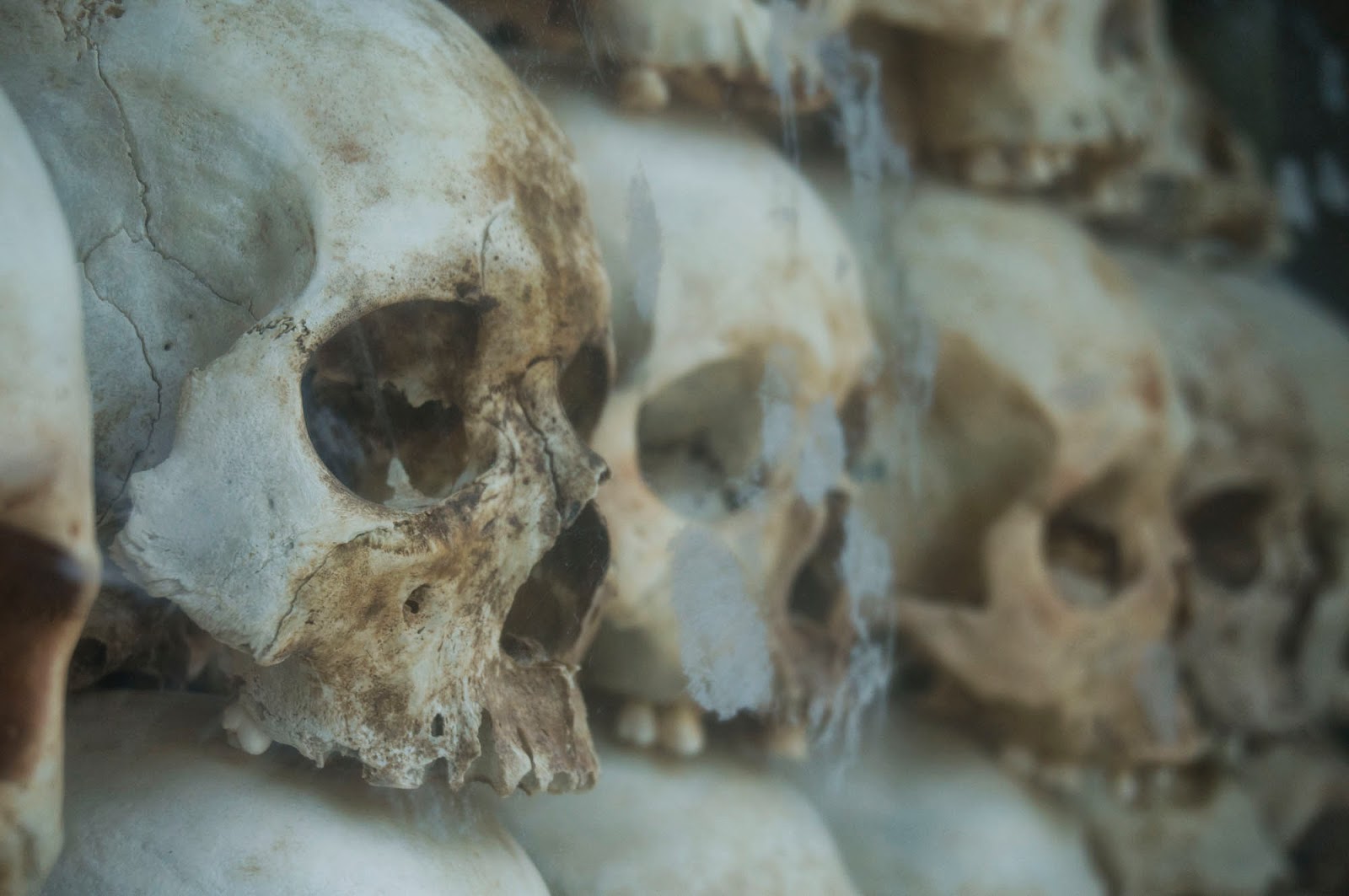 After a day of horrible history a rode my bike around town a bit today seeing some sights, going by the riverside and walking around the lively markets here where you can really find everything. 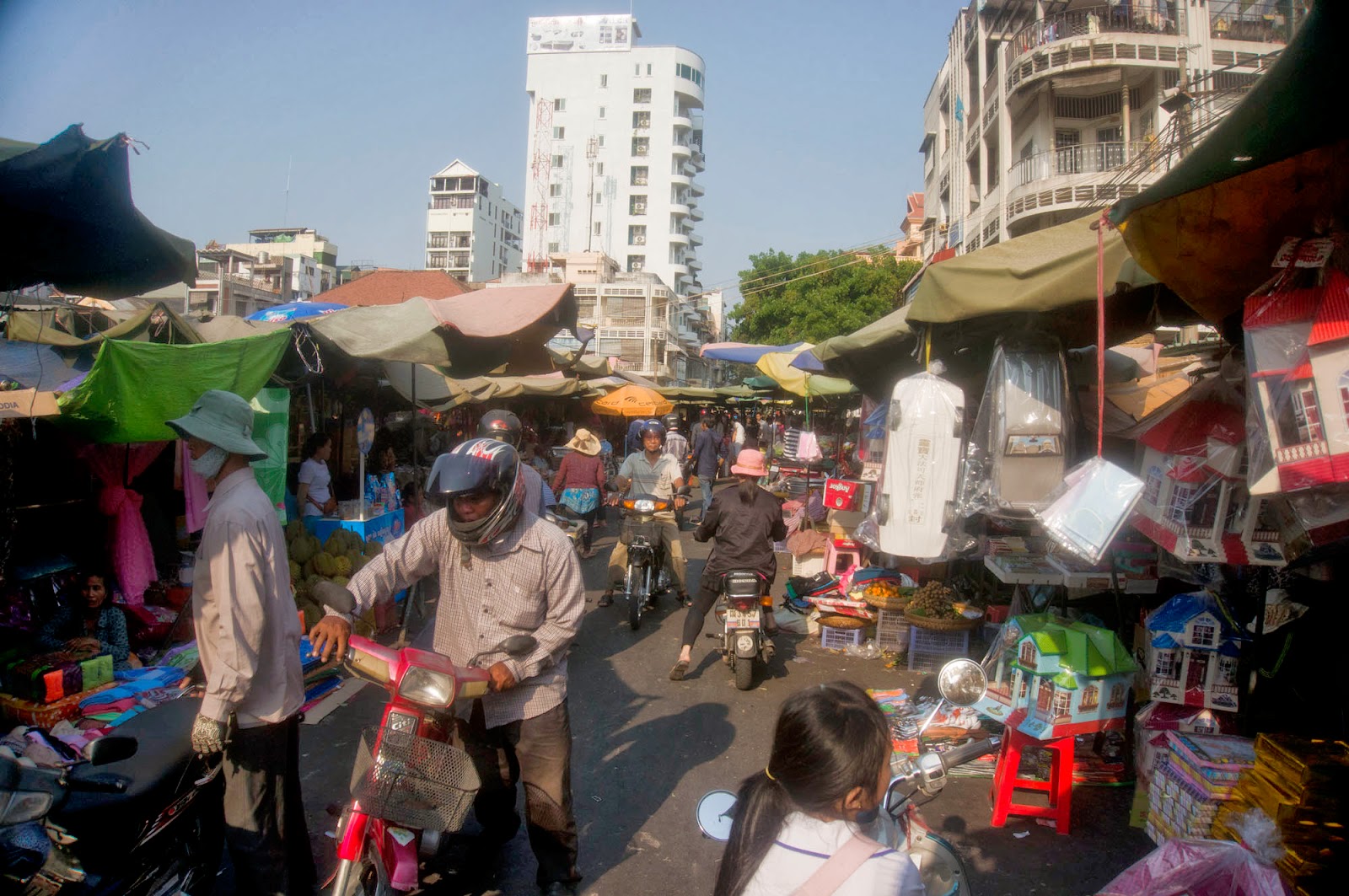 Tomorrow I’ll continue east towards the Vietnam border and will stop a few days in Ho Chi Minh City before continuing south and eventually back into Cambodia again.
Upplagd av Samuel Eriksson kl. 04:15