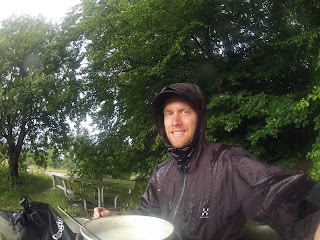 I started early on Sunday morning and after a little tour through Helsingborg I got on the ferry around noon. When on the ferry I could see the dark clouds closing in and I was just hoping it wouldn’t rain much. But almost immediately after I got off the ferry it started raining. A found a good place under a big tree where I stopped for lunch and waited out the rain. After that I continued down the beautiful costal road. I didn’t plan on cycling to Copenhagen that day so I found a great place for the tent near a lake about 30 km from Copenhagen. But after I had settled in it started raining again, and this time it the sky really opened up. So I put on rain clothes and a umbrella and started waiting out the rain. But after about an hour of constant rain I decided to get on the bike again and find somewhere else to sleep for the night. When I had cycled for a little while and got a little higher up I could see a little opening in the gray sky and decided to go. So after I had my dinner in the rain the weather changed and I put up my tent and had a great night sleep. I guess I’m lucky that way, I can sleep almost anywhere and once I’m asleep I rarely wake up during the night. 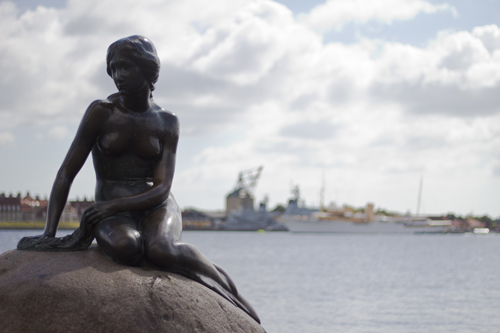 The next day the sun was shining and I cycled on in to Copenhagen and had a great day with some sightseeing around the city, and it is a beautiful and most important great cycling roads. Today I ended up at a camping site south of Copenhagen and tomorrow I’m going west towards
Upplagd av Samuel Eriksson kl. 10:02 1 kommentar:

After an extra day of rest in Tingsryd i set out for my last two days in Sweden for now. Yesterday I found a place for my tent close to a lake where I could wash of. Tonight I ended up in a hostel about 40 km from Helsingborg. So tomorrow I’m heading for Helsingborg and the ferry to Helsingor, Denmark.
It took me three weeks to cycle through Sweden and I have gotten more and more used to cycling and living on this strange life. The first week was the toughest, but after getting through that things have been easier and now I’m excited to see more of Europe.
Upplagd av Samuel Eriksson kl. 11:17 1 kommentar:

I have been lucky to be able to stay with relatives along my cycle through Sweden, but now I’m in Tingsryd and from here on out I have no one I know to stay with. But I’m not worried about that, I’m looking forward getting to know new people along the way and seeing many new places. Because from here it’s not far to Helsingborg and the ferry to Denmark.

These last two days I’ve cycled about 80 km each, the first day when I left Jönköping was a sunny day with almost no winds. But there were more hills than I have been used to here in the south of Sweden, and the landscape reminded me more of home in the north with a lot of forest. Today have been a rainy day, but that was no problem since I had somewhere to stay tonight and I could continue on cycling without many stops. 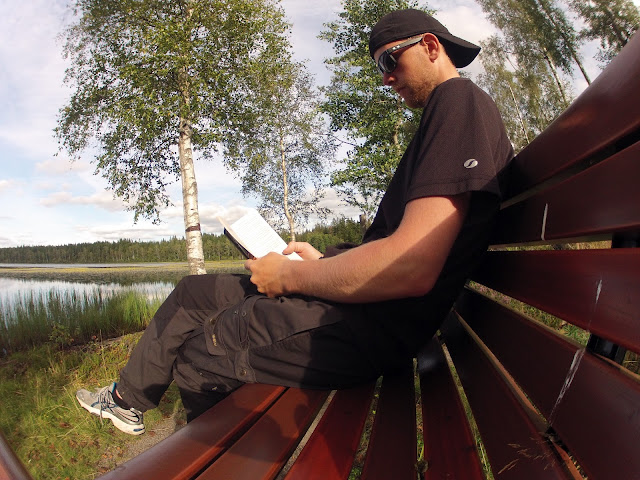 After a good night sleep in Mjölby I continued down Vättern to Jönköping. The weather was rainy, but it wasn’t cold and it wasn’t raining all of the time. 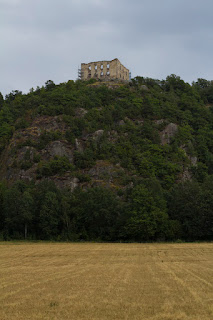 I’m getting more and more comfortable with being on the bike for longer and todays 100+ km felt like an easy day in the saddle. Also because the roads was very good today and I think this was the first day without any gravel roads.

Tonight I also had a couch to sleep on at my cousin’s place. And it always feels great to sleep at someone’s place and having dinner and good company. 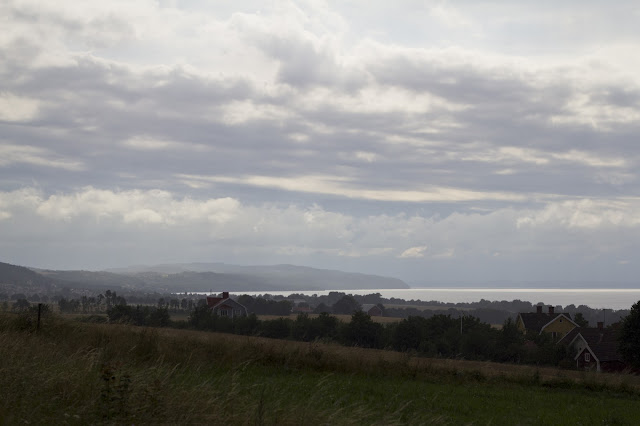 For the next two days I will be heading down to Tingsryd where my uncle lives. And from there it’s not far to Helsingborg where I’m leaving for Denmark. It feels great to get out of Sweden, to see new places and hear another language. It will be much more exiting to cycle trough a different country and face all the problems that might cause. But I’m still in Europe and there probably won’t be much different until I get further east.
Upplagd av Samuel Eriksson kl. 14:34 Inga kommentarer:

I have change the setting so that everyone can comment on the blog.

Two weeks on the road

The first days since leaving Gävle I had great weather and great roads. From Söderhamn the roads have been a lot flatter and it’s also easier to find smaller roads and avoid the big rods with a lot of heavy traffic. But one thing I find about being further south is that it is harder to find a god camping spot. I guess I have to get used to that when I get out of Sweden where you don’t have the right to camp in the wild. On Friday I left Kungsör and headed for Örebro, I was planning not to cycle very far this day and to take it easy and rest a bit. But everything doesn’t always work out the way I plan. When leaving Arboga I met a lovely cycling family from Germany. Mom, dad, two teenagers and a little girl was all on bicycles cycling in Sweden for vacation. Hopefully I’ll see them again in Germany when I’m passing through. 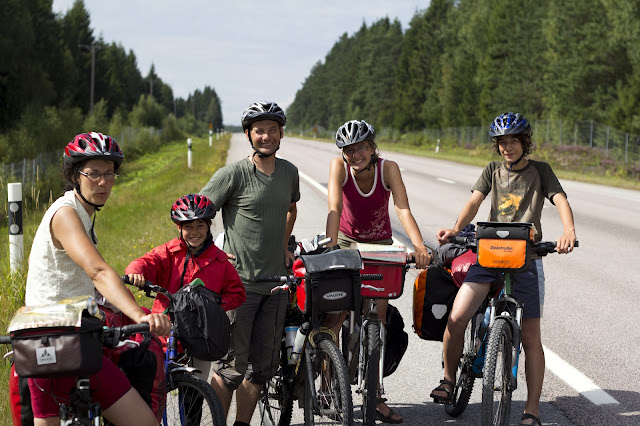 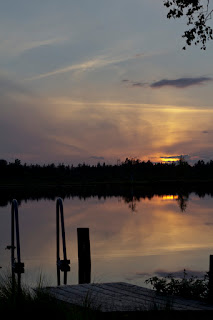 When I arrived in Örebro in the afternoon I found a camping ground that I decided to stay for the night. But it was I very expensive camping and I had to by a camping card to be able to then pay for a place for the tent. So I decided to continue on to Kumle where there was supposed to be a camping ground. But when I had cycled the 20 km to Kumla I only saw a sign saying that the camping ground was closed for the season for renovating. I then looked at an information board and read about a little lake a couple of km west of Kumla. So I continued cycling looking for this lake, and it wasn’t easy to find. At around seven a found a path leading into the forest and a little sign about a lake. I followed the path for more than 500m until I came to a little lake in the middle of a swamp. But I was too tired to continue on that day so I set up my tent at a place where it was not as wet as the rest of the place. But I got a good night sleep and was ready for a new day.

The next day the rain started in the morning and it continued until the afternoon. I cycled along the lake “Vättern” and kept looking for a place to set up my tent. But this day I didn’t find a place for the tent and I ended up at a camping ground in Motala. Today I have taken it very slow and cycled down to the beautiful city Vadstena to see the castle and other fun things, and then continued to Mjölby where I had a couch waiting for me. 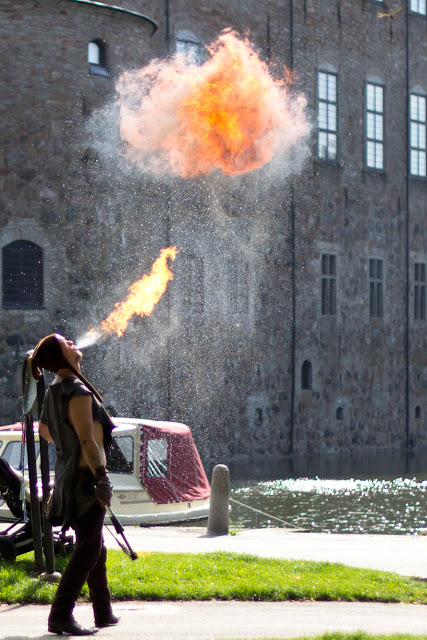 Yesterday I reached Gävle where I had a bed and food waiting for me. the day started near Hudiksvall with mostly gravel roads before Söderhamn. But after lunch the roads was flatter and asphalt all the way to Gävle. I will be staying here for another day to charge my batteries and use the internet which I have been without for a week now. Hopefully I will update the blog more often from now on. Now this is what have happened during my first week on the road:

On Tuesday morning a left Umeå even though the rain was pouring down outside. But I can’t let a little rain stop me from cycling. That day the rain newer stopped and I had to set up my tent for my first night camping in the wild in wet conditions. The worst thing about that isn’t setting up the tent, it’s packing it in the morning after and having a wet tent. 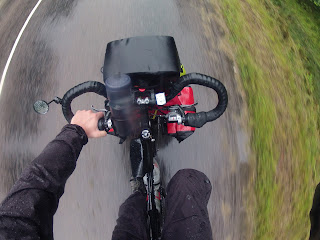 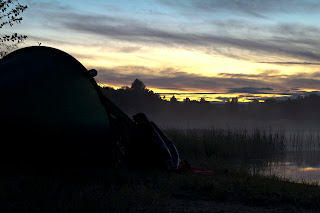 On top of the rain my bicycle computer stopped working when I was leaving Umeå, I got it working a couple of days later though. It’s a great thing to have so that I know how long I have cycled and how long I got left. The next night I had my mind set on Ullånger and a relative where I could spend the night. But the road there was long and hard. The weather was clear that morning all the way to Örnsköldsvik, but after lunch everything turned for the worse. Since the only proper road down the coast is a motorway I had to find smaller roads where I could cycle. But a few times I had to get on the motorway to be able to continue down the coast, hopefully I won’t have to do that again because the cars and trucks was driving really fast and I only had a small space to stay on. And since I was entering “Höga kusten”(High coast) the uphill’s where getting longer and steeper. And when it started raining again the gravel roads that I was on became more and more like mud roads. After a long day I finally reached Ullånger and some well-deserved rest. After a hard day like that I decided to stay there for another day to rest up. On Friday and Saturday I continued down the high coast with more struggling uphill. One of the nights I stayed by a lake and the other was in a real bed on a farm. I was lucky to find that place when I started looking for a camp site. For only 100 sek a got my own little apartment with kitchen, living room and a big bed. On top of that I was invited to dinner by the family that runs the place. And after a great meal and a good night sleep I got ready for the road again. But not before taking a look at the lamas they had at the farm. Sunday was a god day in the saddle as the hills got smaller and there was no rain in sight. 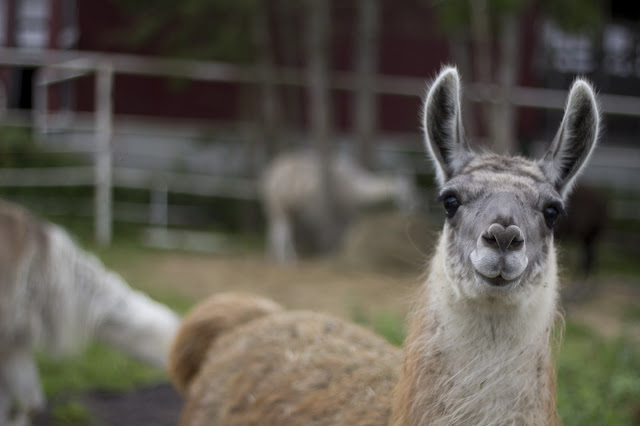 It was hard leaving this morning, many hugs and a lot of tears. And I couldn’t shake all emotions even when I got on the bike. But I manage to get to my destination for the day even if it was a little longer then I thought. The distance for the day ended up being 141km. So I can feel it in my legs=) 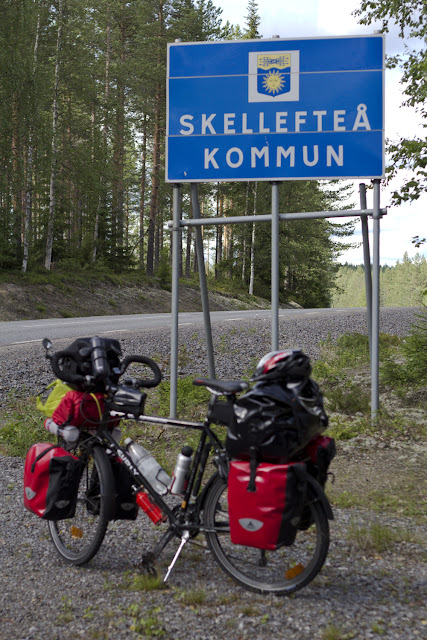 This morning I’m leaving on the adventure on a lifetime. It feels very strange to leave everything behind to do something crazy like this. I think that I have prepared myself enough to be able to deal with most situations. But doing something like this it’s impossible to know everything that could happen, and that’s also what is so appealing about it.
This first day I will be staying with relatives outside Umeå. It’s about 120km and a great start to my adventure…
Upplagd av Samuel Eriksson kl. 22:25 Inga kommentarer:

Click the link to watch the interview with TV4
TV4-Play 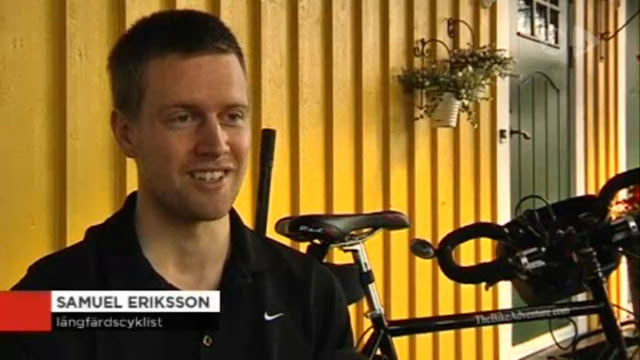